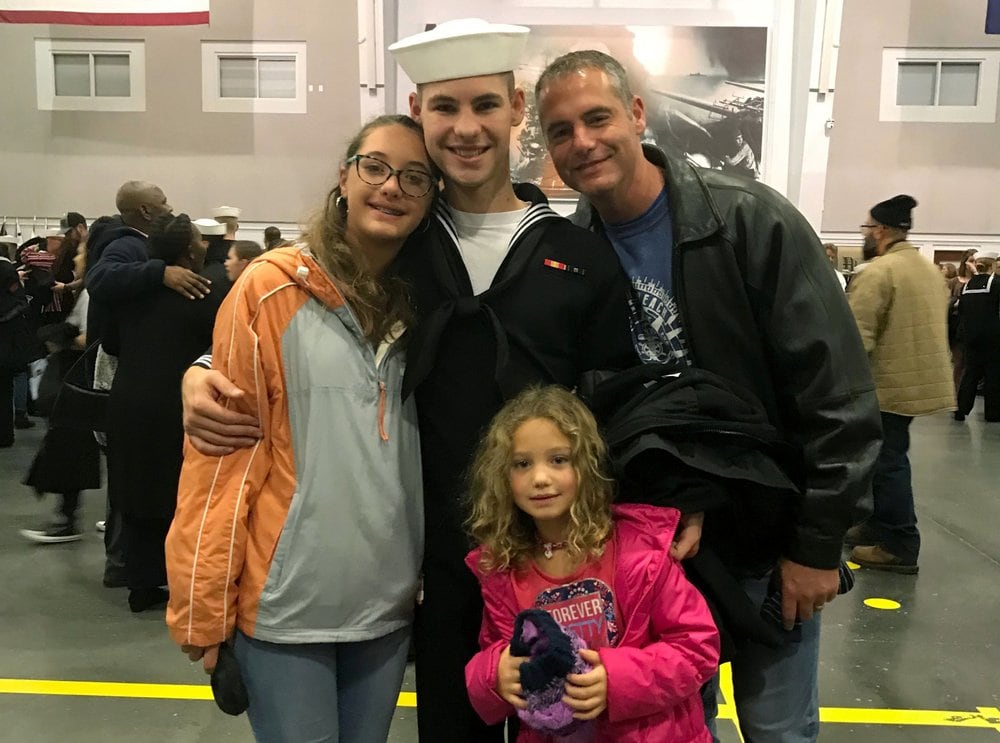 In this Nov. 22, 2019 photo provided by the Walters Family, Cameron Walters, center in Navy uniform, poses for a photo with his sisters, Lily Walters, left, and Shania Walters, right, and his father, Shane Walters, far right, the day he graduated from boot camp in Great Lakes, Ill. Cameron Walters, 21, of Richmond Hill, Georgia, was among three sailors killed at Naval Air Station Pensacola in Florida on Friday, Dec. 6. (Heather Walters/Courtesy of the Walters Family via AP)

Fresh out of boot camp, Cameron Walters proudly told his father in Georgia during their nightly video chat that he had passed the exam qualifying him to stand watch and help secure building entrances at Naval Air Station Pensacola in Florida.

When news broke the next morning of shots being fired on the base, Shane Walters called his son’s cellphone repeatedly throughout the day. There was no answer. The 21-year-old airmen apprentice from Richmond Hill had been killed along with two other sailors by a gunman authorities later identified as a military aviation student from Saudi Arabia.

Shane Walters told The Associated Press on Sunday that his son died standing watch at the classroom building where the shooter opened fire.

“He was just looking forward to getting his wings and being a part of flying and whatever job they gave him,” Shane Walters said. “He just wanted to earn his wings. He was looking so forward to having those wings pinned on his chest.”

On Sunday afternoon, the caskets of the three fallen sailors were escorted aboard an aircraft, bound for Dover, Delaware. A military mortuary is based there. Funeral plans were not immediately known.

“Friday’s senseless act of violence took these young men from us, physically wounded eight others and the hearts of countless more,” said Rear Admiral Gary A. Mayes, the Navy’s Southeast Region commander, during a Sunday news conference in Pensacola. “On behalf of the entire Navy, I extend my sincere and deepest sympathies to the families of the sailors whose lives were taken during this heinous act.”

Authorities said two sheriff’s deputies were wounded and eight others were hurt before a deputy killed the gunman, identified as 2nd Lt. Mohammed Alshamrani of the Royal Saudi Air Force.

Haitham’s stepmother, Brenda Delgado Haitham, said Sunday that the family was still trying to come to grips with the tragedy.

“I continue to speak about him in present tense because it still hasn’t sunk in that he’s no longer here,” she said in a statement to the AP.

Brenda Haitham said her stepson, whom she called “Mo,” had been a star high school athlete who ran track and played basketball.

“After he graduated high school, he told his father and I that he was following his mother’s footsteps and join the Navy,” she said. “… Our hearts are broken, and he will be missed by many.”

Watson’s brother posted on Facebook that his sibling “died a hero” after giving first responders information on the shooter’s location though he was mortally wounded by gunfire.

“After being shot multiple times he made it outside and told the first response team where the shooter was and those details were invaluable,” Adam Watson wrote.

The Navy praised all three flight school students for their “exceptional heroism and bravery in the face of evil.”

“When confronted, they didn’t run from danger; they ran towards it and saved lives,” Capt. Tim Kinsella, the commanding officer of Naval Air Station Pensacola, said in a statement Saturday.

Cameron Walters had just arrived in Pensacola after graduating from boot camp in Great Lakes, Illinois, on Nov. 22, the sailor’s father said. Before enlisting, Walters had worked for a gun manufacturer headquartered near his hometown of Richmond Hill, about 20 miles (32 kilometers) outside of Savannah.

Walters joined the Navy, in part, because his father had served.

“Partly to follow in his dad’s footsteps, to get a better purpose in life,” Shane Walters said. “He was just that kind of kid.”

He described his son as athletic, playing sports including basketball and soccer. Not surprising for a young man living near the coast, Cameron Walters also loved boating and fishing.

When Walters’ birthday came around in June, his father said, the young man liked to spread out the celebration for as much as two weeks surrounding the actual day.

“When it came close to his birthday, he didn’t think he should have to take out the trash. And it’s not even his birthday yet,” Shane Walters said. “We’re supposed to have a cake every night. Things like that.”