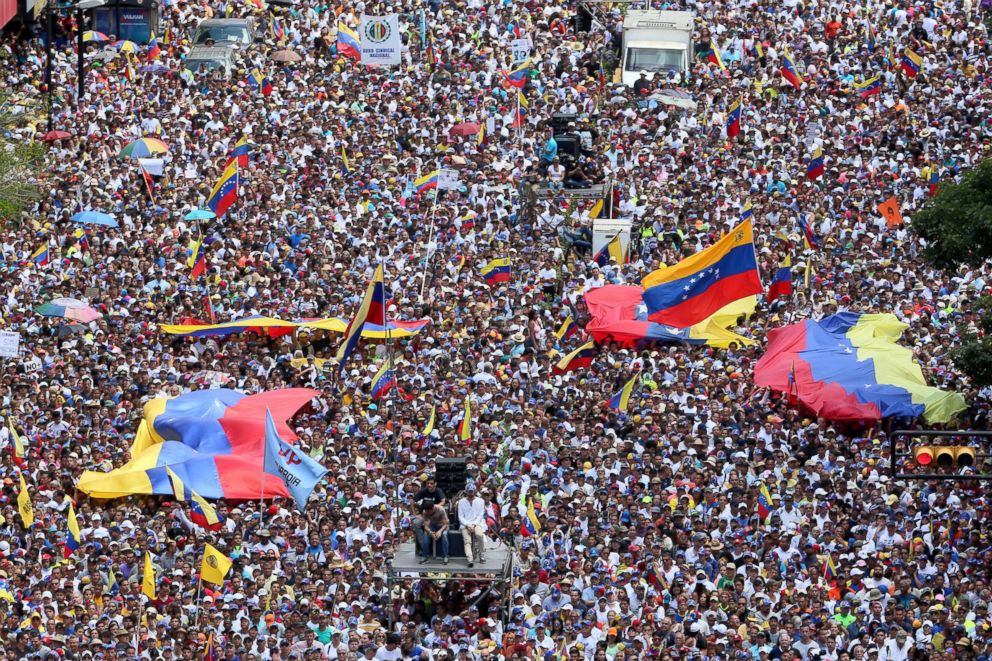 Those measures were proposed by a group of Florida lawmakers.

A proposed federal funding bill is slated to include several legislative items aimed at providing assistance to Venezuelans affected by the turmoil in that country.

The federal government faces a Friday deadline to avoid a government shutdown.

The Venezuela Emergency Relief, Democracy Assistance, and Development (VERDAD) Act of 2019 was backed by a bipartisan group of Senators, including U.S. Sen. Marco Rubio of Florida.

That legislation was included in a nearly $1.4 trillion spending package set to move forward in the House Tuesday. The measure could still be altered, but President Donald Trump has signaled he would sign the bill.

The VERDAD Act includes several amendments that stemmed from bills offered by South Florida Democrats serving in the U.S. House.

“I was proud to co-lead this comprehensive legislative effort that will confront the [Nicolás] Maduro regime’s man-made humanitarian crisis,” Rubio told the Miami Herald.

Venezuela has been on shaky ground throughout most of the year. Inflation has hit sky high marks and residents face shortages of several basic necessities. Multiple journalists, including Americans, have also been detained by the Maduro government in the face of critical reporting.

The unrest stems in part from questions surrounding the legitimacy of Maduro’s most recent elections. That’s led to many nations, including the U.S., to recognize Venezuelan opposition leader Juan Guaidó as the country’s rightful leader.

“When I ran for office, I made a promise to the Venezuelan community in South Florida to stand up to the tyranny of the Maduro regime,” said U.S. Rep. Donna Shalala of Florida’s 27th Congressional District.

“From the moment I was sworn in, my Democratic colleagues and I have worked tirelessly to help the Venezuelan people. The legislation being included in this year’s government funding bill is the culmination of months of hard work and it will hopefully help bring about the end of a regime that has long overstayed its welcome.”

Shalala introduced the Venezuela Arms Restriction Act, which is one of the House bills that ended up in the VERDAD Act and subsequently became part of the budget bill.

Shalala’s measure blocks weapons from being exported to the Maduro government.

Reports have detailed Russia’s efforts to intervene on behalf of Maduro.

Venezuelans looking to leave their home nation often find haven in the Sunshine State. More than 200,000 Venezuelans reside in Florida. Many of those live in South Florida, including in the Weston area.

“The people of my district know all too well the dire humanitarian needs of Venezuela. The Maduro regime’s repeated failures to address the suffering of its own people is only exacerbated by the military sway exerted by Russia throughout the entire region,” Wasserman Schultz said.

“The inclusion of this legislation in the Fiscal Year 2020 Appropriations Bill — paired with legislation that offers humanitarian assistance and bans the export of crime control materials, authored by my esteemed House colleagues — will provide badly-needed tools and aid to Venezuelans who want to see democracy restored.”

The final House bill regarding the Venezuela crisis that will be added to the funding package is the Humanitarian Assistance to the Venezuelan People Act of 2019.

That bill, filed by U.S. Rep. Debbie Mucarsel-Powell of Florida’s 26th Congressional District, aims to help facilitate the shipment of humanitarian aid to Venezuela and other nations.

In March, Shalala and Wasserman Schultz visited the Venzuela-Colombia border and heard details of humanitarian aid being denied by the Maduro government. Maduro eventually lifted its ban on aid from the Red Cross.

“The Venezuelan people need our help. The crisis in that country is now the most underfunded refugee crisis in modern history,” Mucarsel-Powell said.

“I am pleased that our legislation to aid the Venezuelan people will be included in FY 2020 appropriations bill that will not only help the people in Venezuela but also their neighbors that have been taking in hundreds of thousands of Venezuelan refugees. We must not turn a blind eye to human suffering at the hands of a corrupt regime.”

The funding package would keep the federal government open until Sept. 30, 2020.