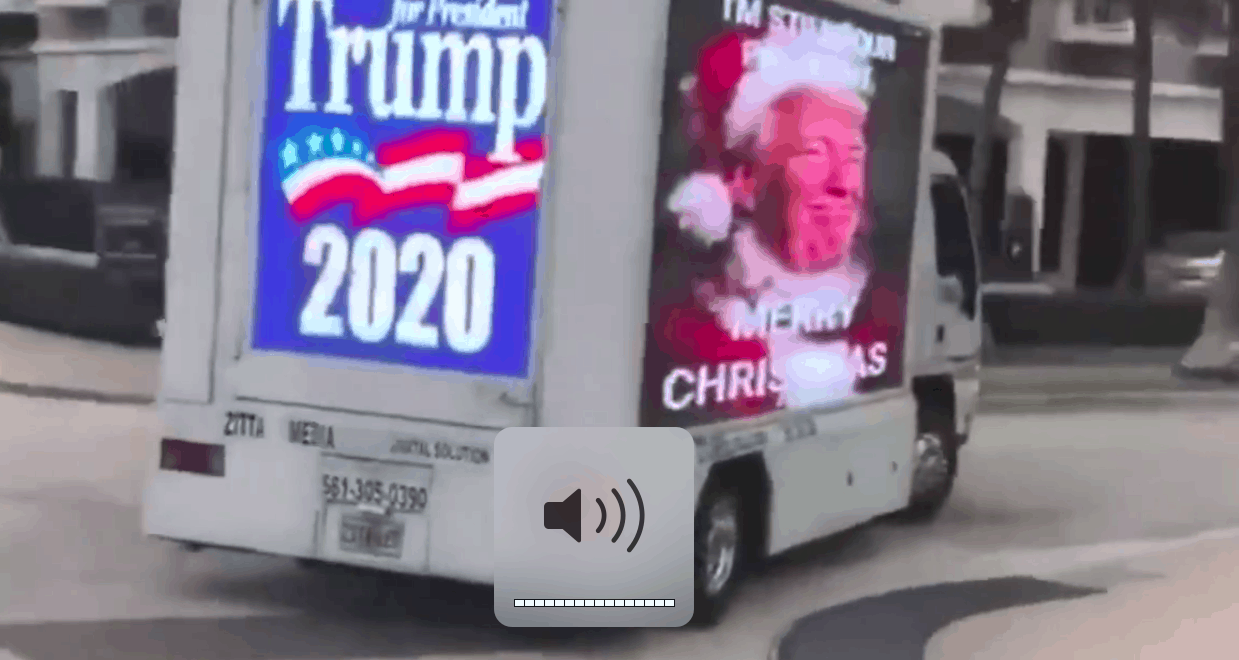 It started when Dan Scovino, Social Media Director for the White House, tweeted video of a Zitta Media billboard truck driving around Palm Beach. The truck had a digital image on the back of Trump’s headshot alternating with a campaign logo. On the side was a picture of Trump in a Santa Clause suit with the caption “I’m still your President, Merry Christmas.”

But things took off after Trump shared the Scovino post himself with the caption “Tremendous Spirit!”

The video as of mid-day Sunday had been viewed more than 2.1 million times.

With Zitta Media’s phone number printed clearly on the bumper of the truck, the video’s distribution generated significant calls to the business.

That number actually patches directly to company Vice President Josias Zitta’a number. Even though he’s vacationing in Boston, he learned of the retweet immediately.

“That was huge,” Zitta said. “We got very happy. The recognition, that’s very important to us.”

Notably, the Trump billboards on the truck weren’t paid for by the campaign, the Republican party or any outside group. It’s just images Zitta Media put up themselves.

“We are actually volunteering,” Zitta said. “We are proudly supporting the President.”

The company regularly puts Trump imagery on the side of its truck for certain occasions. Right now, the truck is rolling around the Mar-A-Lago area and through Palm Beach with the Santa Trump imagery because the Zittas know the First Family came to town for Christmas.

The Trump promotions earned attention for Zitta Media before. The truck rolled up earlier this month on a pro-impeachment rally, winning the notice of local politicos and protesters hostile and friendly alike.

But all publicity is good for the small company, made up of Josias Zitta, his father and company President Arno Zitta and company Treasurer Josue Zitta.

Out of the many calls already received this weekend, Josias said about 15 potential leads have already surfaced, and he hasn’t combed through his voicemail completely.

The company has done paid political promotion in the past. It’s outreach has focused on GOP clientele, but the company doesn’t work exclusively with Republicans, said Zitta.

“Our support isn’t really just about Republicans. It’s about President Trump,” said Zitta, who describes himself as a pro-life conservative. The company has promoted Trump’s candidacy since the 2016 Presidential campaign.

In fact, a surprising number of Democratic politicians end up calling the company after spotting the truck in Trump mode, Josias said.