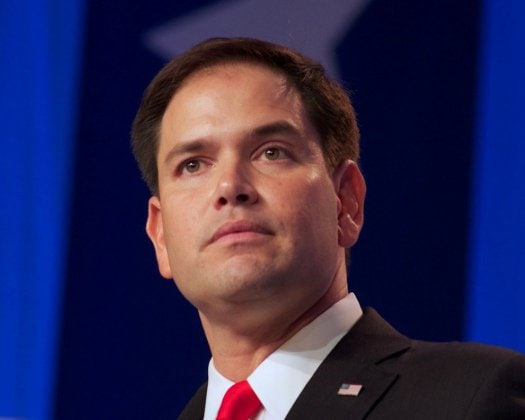 International allies and domestic opponents have criticized the airstrike that killed the general.

Sen. Marco Rubio said Qassem Soleimani was not in Iraq on a diplomatic mission when he was killed in a U.S. airstrike Friday.

But on Sunday, Rubio backed the President in an interview with Margaret Brennan on CBS’ Face the Nation, saying Soleimani was in Iraq on a terrorist mission.

“I believe Iran was on the verge of scaling up the attacks that they were aiming against the United States, probably through surrogates in many places not just in Iraq, but in Syria as well,” Rubio said. “And the United States had to take action in order to prevent that from happening and to make very clear what would happen if they undertook further attacks down the road.”

Rubio, a member of the Senate Foreign Relations and Intelligence committees, said Iranian-backed forces had launched at least 10 missile strikes on U.S. troops since October. The county has vowed a harsh response to Soleimani’s killing.

A week before the strike on the general, Iranian fighters launched up to 30 missiles at an Iraqi military base. The attacked killed a U.S. Defense Department contractor and injured American soldiers stationed there, department officials said.

“It was made very clear to the Iranians what would happen, and to the IRGC (Islamic Revolutionary Guard Corps) that Soleimani headed, what would happen if a single American was killed,” Rubio said. “That happened, they crossed that line, and — if you don’t enforce the consequences — they won’t believe it, and they’ll continue to ratchet it up.”

The U.S. had already retaliated to the strike that killed the Pentagon contractor with its own attack killing 25 Iranian militia fighters. But speaking from Mar-a-Lago, Trump announced the airstrike Friday against who he called the world’s number one terrorist.

“Under my leadership, America’s policy is unambiguous: To terrorists who harm or intend to harm any American, we will find you; we will eliminate you. We will always protect our diplomats, service members, all Americans, and our allies.”

On Sunday, Iraq’s Parliament called for the U.S. to remove its troops from the country. Later, Iran state TV announced the country would no longer acknowledge any limit set by the 2015 nuclear deal.

Rubio also attacked the nuclear deal, which the Trump administration withdrew from in 2018.

“The fact they even have ballistic missiles tells you why the Iran Deal was so flawed,” Rubio said. “It provided them billions of dollars that they were able to use to fund all of that.”