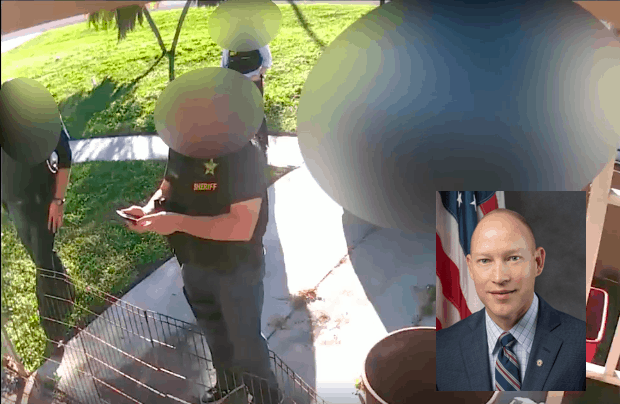 Politics can turn aggressive, especially on social media. But a recent post on a Facebook group was enough to prompt state Rep. Spencer Roach to call the authorities.

The post came from activist Randy Scott, who runs the group People Of SWFL, who has heavily criticized plans for a new fire station in Lehigh Acres. As Roach has an appropriations bill filed seeking $5 million in state funds for the station, that’s made the North Fort Myers Republican a target of Scott’s ire.

“Spencer, he doesn’t like the fact I’m making headaches and exposing some of his activity,” Scott said. “I don’t really know what more to say.”

Scott took surveillance video of deputies at his door and made a video complaining about Roach calling the cops. The video, which includes a picture of Roach with a Hitler-mustache photo-edited on, was shared on Scott’s Facebook group.

“There is a small cabal running these politicians as political seat warmers and on occasion one of these benefactors peeks out at the Baghdad airport and is addressed permanently.

“So now the Iraq parliament is in turmoil as it is forced to show Iran was controlling the parliament all along.

“We are getting close and closer to the day of reckoning for domestic enemies being brought to justice and they know it.”

Roach called the Sheriff’s Office over the complaint and asked it to be investigated as a threat. He provided Florida Politics with a statement explaining his course of action, and why he considered Scott in particular a threat.

“This week I received a threat that was communicated via a local conspiracy-theory Facebook page,” Roach said. “Having knowledge of the background of this individual, which includes a history of being fired from government jobs (including being drummed out of the military after two months), a risk-protection order against him for cyber-stalking … I promptly reported this to both local law enforcement and to the Florida Department of Law Enforcement.

“An investigation was conducted, and law enforcement officials determined that there was no imminent threat of violence.”

He said he understood criticism but felt the post edged further than simply free speech.

“As a champion of the 1st Amendment, I encourage spirited debate, welcome criticism, and enjoy political satire. I also believe it is prudent to report threats to law enforcement in order to allow for a professional threat assessment,” Roach said.

“I appreciate the seriousness, professionalism, and expediency with which our local law enforcement agency responded and investigated this threat, and I accept the determination that the threat is not credible.”

But he also made clear he personally still takes Scott’s words seriously.

“I also remain fully prepared to take lawful measures to defend myself and my family from any physical threat that I may encounter,” Roach said.

Scott took some umbrage, particular at the dredging up of prior run-ins with the police.

“Spencer Roach deflects with his fairy tales of conservatism,” Scott said in his own statement to Florida Politics.

He also defended his own professional background, and suggestions the interactions Roach referenced with police were also politically motivated. Scott’s attorney said he was honorably discharged.

“I was never fired from a government job, the military was a contract job classification no longer available after boot camp, and the risk protection order was Amira Fox employee Jennifer Gutmore handling one case in her transition from Asst. States Attorney to Assistant State Attorney. Of which Gutmore lost badly in the appeals process and Corbin the judge who issued it could resign quick enough after the reversal,” he said. “That case is precedential and was written up in The Washington Post!”

And he dismissed Roach’s actions as lacking in leadership.

“Spencer(‘s) real conclusion in his statement should be ‘I am a butter cup’ caught in the world of liberalism hiding in a fake Republican swamp!”