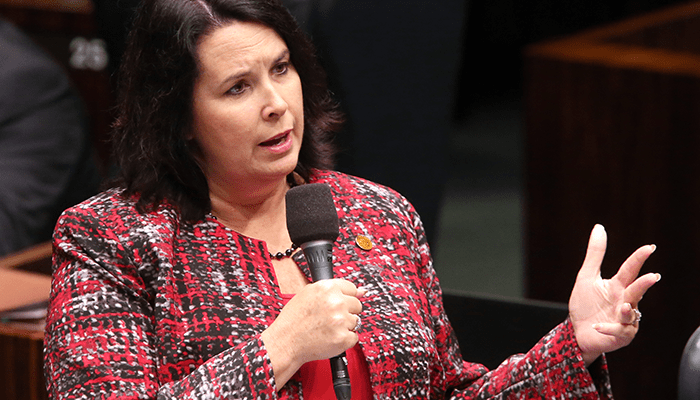 The Senate Judiciary Committee voted 3-2 to advance the bill.

A Senate panel advanced a bill Wednesday that would require minors to get parental consent before obtaining an abortion.

Gov. Ron DeSantis endorsed the measure Tuesday during his State of the State address. Republicans consider the proposal a priority.

“I also hope that the parental consent bill will make its way to my desk during this Session,” DeSantis.

Speaking to reporters after the meeting, Stargel said the Governor’s comment was not the only reason the bill has momentum.

“Obviously having his support is huge, but I don’t think it’s just his support,” she said. “I think, as one of the presenters said, this discussion, when viewed across the state, is actually supported by people on both sides of the issue.”

Current law states a minor’s parents must be notified 48 hours before she obtains an abortion, with some exceptions. But Stargel says that doesn’t do enough to strengthen communication within Florida families.

“I think there’s a been a breakdown of the family in a lot of ways, and I think that just notice does not involve the parents in that conversation.”

“This bill protects minor girls who are pregnant or considering an abortion by involving at least one of their parents or legal guardians in that decision-making process,” Stargel said. “This bill also protects the fundamental right of parents to raise their children as they see fit without government intrusion.”

Under the proposal unemancipated minors seeking abortions must get consent from one of their parents. Victims of abuse or girls believing they are mature enough to make an independent decision can seek court waivers.

The judicial bypass component was added to this year’s version of the parental consent bill to reflect Florida Supreme Court concerns that minors in some circumstances cannot discuss it with their parents. It also matches the court’s finding that exemptions for medical emergencies be made.

Senate Minority Leader Audrey Gibson raised several doubts about the bill, including whether it would bolster family communication. Navigating the justice system can be intimidating for minors, she added.

“All things don’t end badly, but we should not put any additional obstacles in the family unit or on a young lady who has decided what she thinks is best for her course,” Gibson said.

The committee initially accepted changes moving the bill closer to Rep. Erin Grall’s version (HB 265), which awaits a House-wide vote. But a parliamentarian hiccup from a complaint raised by Democratic Sen. José Javier Rodriguez led Stargel to pull the amendment. The change included increasing the punishment for violating Florida’s infants born alive statute to a third degree felony from a first degree misdemeanor.

“Things got a little confusing,” Stargel said. “We thought it best just to take a step back, go ahead and move it to the next committee, and then we can deal with it there.”

“What you’re witnessing here is a delay of game,” Baxley said. “We don’t need to delay. We need to move forward.”

Terrie Rizzo, chair of the Florida Democratic Party, said the Senate wasted no time advancing the bill. Tuesday was the second day of the 2020 Legislative Session.

“SB 404 is not about protecting children, it is about usurping the will of Florida voters, attacking women’s rights, and making it harder for women and girls to control their own bodies,” Rizzo said. “The Republican assault on women’s privacy has to stop!”

On Tuesday, Human Rights Watch sent a letter to the Judiciary Committee imploring the panel to reject the bill. The group claimed the legislation would undermine the Legislature’s goal of supporting family communication.

The letter quoted a 2017 policy statement from the American Academy of Pediatrics: “No evidence exists that legislation mandating parental involvement against the adolescent’s wishes has any added benefit in improving productive family communication or affecting the outcome of the decision.”