Marco Rubio says he will cooperate with Joe Biden, depending on how the President-elect 'behaves'

The floor of the U.S. Senate now belongs to President Donald Trump’s lawyers as they push the Republican-led chamber for an acquittal on charges that he abused his power and obstructed Congress.

The President’s attorneys will begin their arguments Saturday in the impeachment trial and are expected to insist the president did nothing wrong when he asked Ukraine’s leader to investigate political rival Joe Biden.

The attorneys have foreshadowed an aggressive, wide-ranging defense that will assert an expansive view of presidential powers and paint Trump as besieged by political opponents determined to undo the results of the last election and ensure his defeat in the next one. They are also expected to try to put Biden on the defensive as he campaigns for a first-place finish in the Iowa caucuses next month.

The opening of the defense’s case comes after a three-day presentation by House Democrats, who as they wrapped up Friday warned that the president will persist in abusing his power and endangering American democracy unless Congress intervenes to remove him before the 2020 election. They implored Republicans to allow new testimony to be heard before they render a final verdict. 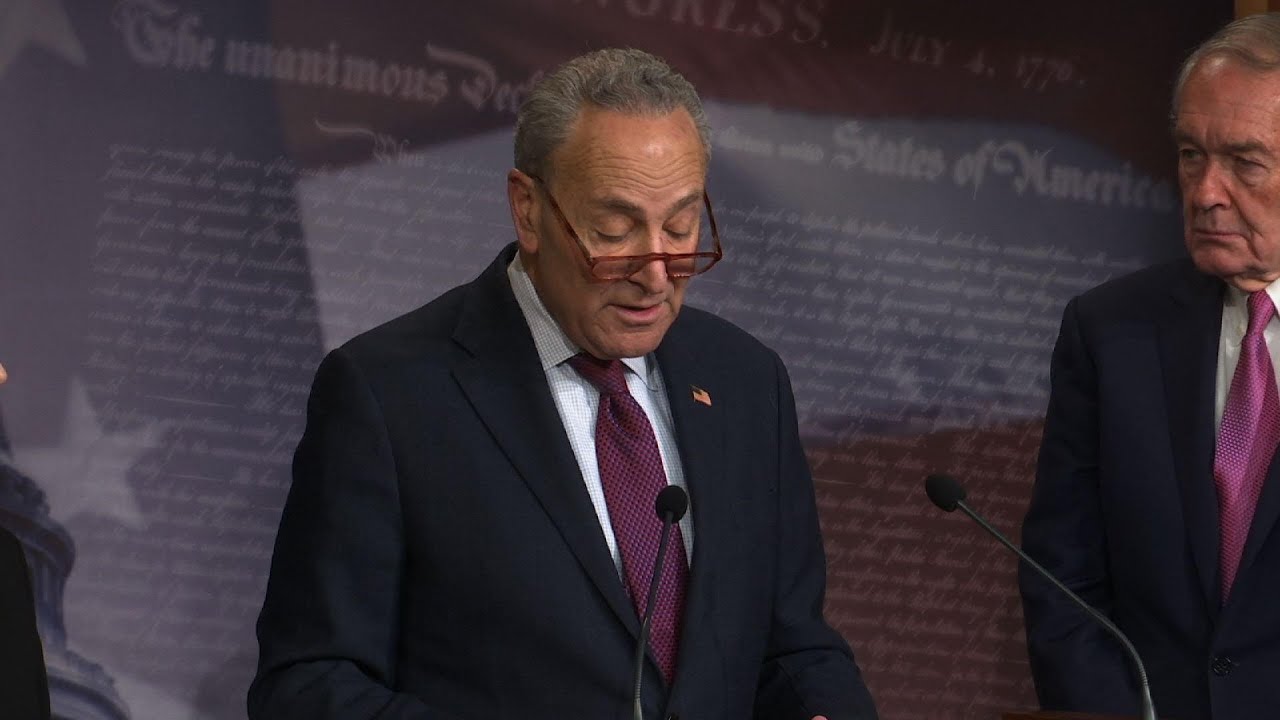 Schiff closed Democrats’ case after three days of methodical and impassioned arguments detailing charges that Trump abused power by asking Ukraine for politically motivated probes of political rivals, then obstructed Congress’ investigation into the matter. Trump’s lawyers get their first chance to defend him Saturday, and are expected to argue that he was within his rights as president when he asked Ukraine for the investigation.

In making their case that Trump invited Ukraine to interfere in the 2020 election, the seven Democratic prosecutors peppered their arguments with video clips, email correspondence and lessons in American history. Republicans who found the presentation tedious and redundant can expect differences in tone and style from Trump’s lawyers, who plan to attack the impeachment as much on political as legal grounds.

“It’s really trying to remove the president from the ballot in 2020. They don’t trust the American people to make a decision,” Sekulow said.

Defense lawyers have signaled that they’ll cast Trump as a victim not only of Democratic outrage but also of overzealous agents and prosecutors. They’ll likely invoke mistakes made by the FBI in its surveillance of a former Trump campaign aide in the now-concluded Russia probe. In response to allegations that he invited foreign interference, they’ve already argued that it’s no different from Hillary Clinton’s campaign’s use of a former British spy to gather opposition research on Trump in 2016.

With acquittal likely — Republicans hold a 53-47 majority in the Senate, and a two-thirds vote would be required for conviction — the defense team is also arguing to an American public that heads to the polls in 10 months. Trump, eyes on the audience beyond the Senate chamber, bemoaned the schedule in a tweet, saying it “looks like my lawyers will be forced to start on Saturday, which is called Death Valley in T.V.”

Arguments are scheduled for just a few hours Saturday in what defense lawyers called a sneak preview. They’ll continue Monday.

The president is being tried in the Senate after the House impeached him last month on charges he abused his office by asking Ukraine for the probes at the same time the administration withheld hundreds of millions of dollars in military aid. The second article of impeachment against Trump accuses him of obstructing Congress by refusing to turn over documents or allow officials to testify in the House probe.

The Senate is heading next week toward a pivotal vote on Democratic demands for testimony from top Trump aides, including acting chief of staff Mick Mulvaney and former national security adviser John Bolton, who refused to appear before the House. It would take four Republican senators to join the Democratic minority to seek witnesses, and so far the numbers appear lacking.

“This needs to end,” said Republican Sen. Lindsey Graham of South Carolina, a Trump confidant. He said he doesn’t want to hear from Bolton or the Bidens.

Like a prosecutor speaking to jurors for the final time before deliberations, Democrats moved Friday to preempt anticipated arguments from Trump’s lawyers, attacking lines of defense as “laughable.”

Those include that he had a legitimate basis to be concerned about potential corruption in Ukraine and to pause military aid to the country. One of the president’s lawyers, Alan Dershowitz, is expected to argue that an impeachable offense requires criminal-like conduct, even though many legal scholars say that’s not true.

With Chief Justice John Roberts presiding, the final day of the Democratic arguments opened with Rep. Jason Crow of Colorado, a former Army ranger, saying the only reason Trump eventually released his hold on the aid Ukraine desperately relied on to counter Russian aggression was because he had “gotten caught.”

“The scheme was unraveling,” Crow said. The money for Ukraine was put on hold after Trump’s July 25 call to Ukraine that launched the impeachment probe, and released Sept. 11 once Congress intervened.

Throughout the three days, Democrats balanced the legal and history lessons with plain-spoken language about what they see as at stake: the security of U.S. elections, America’s place in the world and checks on presidential power. The Democrats argued that Trump’s motives were apparent, that he abused power like no other president in history, swept up by a “completely bogus” Ukraine theory pushed by attorney Rudy Giuliani.

“Let me tell you something. If right doesn’t matter, it doesn’t matter how good the Constitution is,” Schiff said in an emotional plea to a pin-drop-quiet room. “If you find him guilty you must find that he should be removed. Because right matters.”

They argued that Trump’s abuse was for his own personal political benefit ahead of the 2020 election, even as administration officials were warning off the theory that it was Ukraine, not Russia, that interfered in the 2016 election.

The Democrats’ challenge was clear as they tried to convince not just fidgety senators but an American public divided over the Republican president in an election year.

A new poll from The Associated Press-NORC Center for Public Affairs Research showed the public slightly more likely to say the Senate should convict and remove Trump from office than to say it should not, 45% to 40%. But a sizable percentage, 14%, said they didn’t know enough to have an opinion.

One issue with wide agreement: Trump should allow top aides to appear as witnesses at the trial. About 7 in 10 respondents said so, including majorities of Republicans and Democrats, according to the poll.

After both sides have concluded their arguments next week, senators will face the question of whether to call witnesses to testify. But that issue seems all but settled. Republicans rejected Democratic efforts to get Trump aides, including Bolton and Mulvaney, to testify in back-to-back votes earlier this week.

As for Ukraine connections, evidence has shown that Trump, with Giuliani, pursued investigations of Biden and his son, Hunter, who served on a Ukrainian gas company’s board, and sought the probe of the debunked theory that Ukraine interfered in the 2016 U.S. election.

It’s a storyline many in the president’s camp are still pushing. Giuliani, in an appearance Friday on “Fox & Friends,” insisted he would present evidence on his new podcast of “collusion going on in Ukraine to fix the 2016 election in favor of Hillary” Clinton.