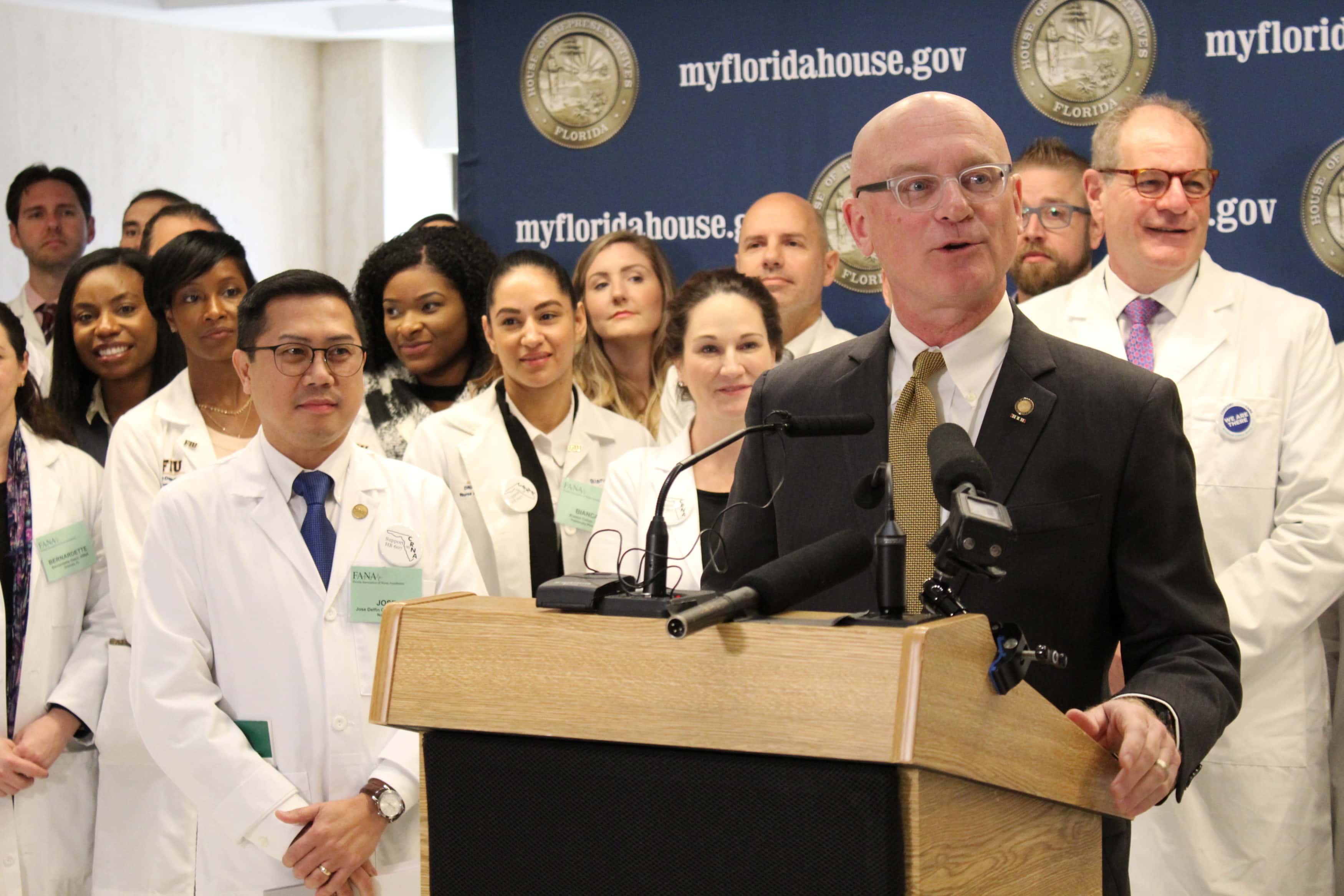 The bill is one of House Speaker José Oliva's top priorities.

Nearly 200 nurse anesthetists filled the fourth floor Rotunda at the Capitol Tuesday in support of a bill for increased nurse independence.

House Speaker José Oliva this year has thrown his support behind the bill (HB 607), possibly giving Rep. Cary Pigman the push needed to shepherd it through that chamber. However Gov. Ron DeSantis and the Senate aren’t as keen on the proposal. No Senator has filed a companion bill this year.

Currently, APRNs and physician assistants require supervision from a doctor. But the Avon Park Republican’s proposal would give those practitioners more independence.

“I think historically the historical state laws didn’t contemplate the sophistication of the education and training that you all have received,” he said.

Pigman, a medical doctor, is one vocal physician pushing for the proposal. But the Florida Medical Association and other groups are concerned the bill would exclude physicians from some health care procedures.

For Pigman, his legislation in part addresses gender income inequality in STEM careers. Men made up 70% of physicians who recently re-registered while women represent 85% of APRNs.

Dismissing APRNs as unqualified and in need of supervision “is on its face sexist and reprehensible,” he said.

Studies show there is no change in the quality of the care provided by physicians versus nurses, according to Pigman and FANA president José Castillo.

“I would say, when you look at what their experience is on paper, what their training is, it’s quite extensive and exhaustive,” Pigman told reporters. “And when you look at studies that compare the outcome between those two categories, nurse practitioners and CRNAs and physicians, our outcomes are equivalent. “

On Wednesday, APRNs from the Floridians Unite for Health Care coalition stood on the same floor to support the bill. Oliva was supposed to join Pigman for that press conference, but the Speaker pulled out because of a scheduling conflict.

Speaking to reporters after Wednesday’s House session, Oliva lamented the fact that he couldn’t attend the conference. But he will have plenty to say in the Session’s remaining weeks.

“It’s important that people see there’s a great deal of other folks that this affects very directly and also to hear their voices,” he said.

Republican Sen. Jeff Brandes, who filed the bill’s Senate counterpart last Session, said he supports the legislation and expects it to gain traction in the Senate. Last year, the House took its major wins on health care but punted on APRN independence.

But Oliva on Wednesday remained confident the bill can pass both chambers without needing to compromise; he’s got the support as-is.

“I feel strongly that the Governor and the President of the Senate will give it its fair shot and we’ll look at the facts for what they are,” Oliva said. “And I think the facts are on our side.”