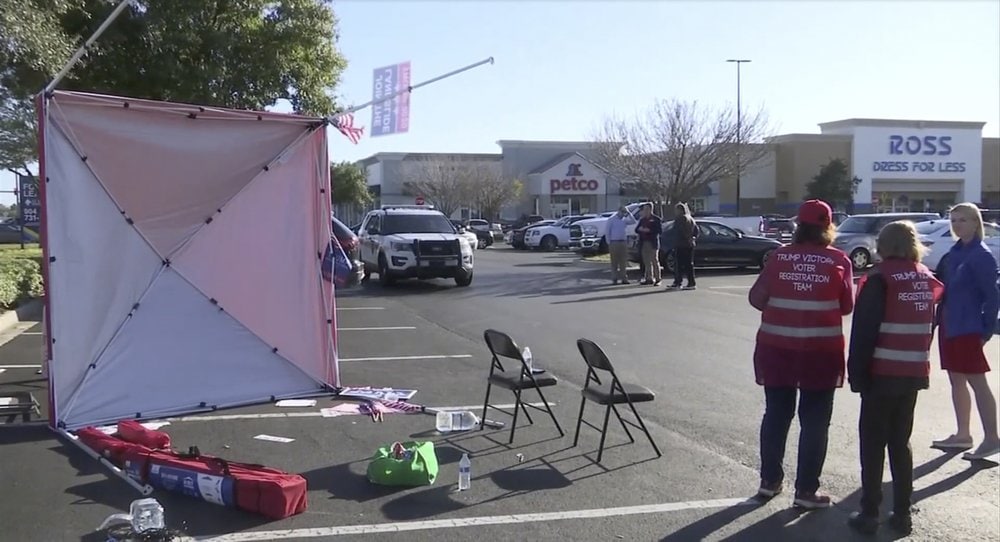 In this Saturday, Feb. 8, 2020, image taken from video a voter registration tent lays on its side after Gregory Timm drove a van through it, in Jacksonville, Fla. The Jacksonville Sheriff's Office said Sunday, Feb. 9, Timm was arrested in the incident. (WJXT News4Jax via AP)

The man who authorities say deliberately drove a van into a tent where voters were being registered by local Republicans was working as a stage hand and had been living in northeast Florida for two years, according to jail records and an arrest report.

Gregory Timm, 27, was a stage hand who had been referred work through the local International Alliance of Theatrical Stage Employees, according to the arrest report released Sunday.

Jail booking information said he had lived in Jacksonville for two years.

The heavily redacted arrest report didn’t offer a motive for the Saturday incident and didn’t reveal Timm’s political affiliations. Records from Arizona showed Timm registered to vote in 2011 as a “non-partisan.” Florida records showed no voter registration information for him.

Saying they were outraged, state and local Republican officials on Monday vowed to not let the incident stop them from registering voters and working to re-elect President Donald Trump. They called what happened a “partisan political attack.”

“We must not lash out in kind. What we must do is win,” said Dean Black, chairman of the Republican Party of Duval County. “The coward who attacked us tried to sweep us from the streets. He is not going to be successful. We will return in ever greater numbers in street corners across this city and across America.”

No one on Monday answered a phone number listed on the arrest report.

Timm has been charged with two counts of aggravated assault on a person 65 years old or older, one count of criminal mischief and driving with a suspended license. There were no injuries. The arrest report said no drugs or alcohol were involved.

Witnesses told deputies Timm slowly drove by a tent that had been set up by local Republicans in a parking lot on Saturday to register voters.

“Kind of out of the blue, a man approached us in a van, was waving at us, kind of a friendly demeanor, thought he was coming up to talk to us, instead he accelerated his vehicle and plowed right into our tent, our tables,” volunteer Mark Alfieri told television station WJAX.

Afterward, he backed up, recorded the damaged tent and scattered signs on his cellphone and made obscene gestures before leaving, Alfieri said.

In a statement posted on its Facebook page, IATSE Local 115 said Timm had been referred for job placement through the union’s hiring hall, but he was not a member.

“The membership of IATSE Local 115 is a diverse group of workers with varying political beliefs and is outraged at the actions of Gregory William Timm,” the statement said.