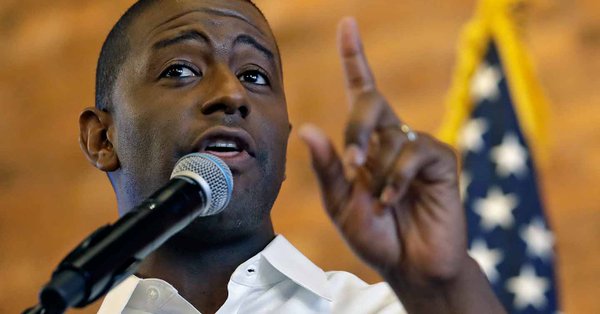 Bloomberg, he said, needs to do more than just apologize for stop-and-frisk.

His comments come as former New York City Mayor Mike Bloomberg prepares for his first appearance on the presidential debate stage and will no doubt face questions about the controversial police pat-down program he championed as Mayor.

The policy allowed New York City police officers to stop any individual they believed was suspicious and frisk them. It came under swift criticism as the policy disproportionately affected communities of color.

Gillum said he remembers the first time he was pulled over by a police officer.

“Mine was 24 years ago. I remember it was like yesterday. The experience was so traumatic I had to drive a few blocks later to pull over because I couldn’t stop shaking,” Gillum said. “And so when you consider that over the course of his term as mayor, over 5 million of these, 900,000 in one month Black and Brown boys thrown up against the wall.”

Bloomberg has since apologized for the policy and admitted it was wrong. But leaked 2015 audio of him defending the then-policy brought the debate back into the mainstream.

Gillum said he’s by no means a “never Bloomberg,” but that more needs to be done than offer an apology.

“If there’s an apology and there has been, you got to tell us where the growth moment has been so we can be assured if we’re to trust you with our nomination, with the presidency and you’re the chief policy officer as it relates to public policy around a criminal justice issue in this country, how do we ensure it doesn’t happen again? And you put us on a better pathway to the future,” Gillum said.

ABC noted that there will not be a person of color on the debate stage Wednesday night as Bloomberg debates for the first time in Las Vegas ahead of the Nevada Caucus Saturday.

Gillum said it’s not necessarily notable that there won’t be a person of color on the stage, but that “those issues will be extremely present.”

He then evoked U.S. Elizabeth Warren as a candidate who addresses those issues “very well.”

“Bloomberg is the walking personification of her core message – that billionaires are trying to buy and corrupt our democracy. And also that we can’t have a Democratic nominee who is bad on gender, race, and economic issues.,” Adam Green, who has worked with Warren and her team since 2010 as the co-founder of Progressive Change Campaign Committee, a progressive PAC, told ABC News.

Gillum has been working through his Forward Florida PAC to boost voter registration in Florida ahead of the March 17 democratic presidential primary and November general election. He also appears frequently as a pundit on cable news outlets.

His comments on ABC were not an endorsement for Warren, but his comments highlight was has become a new issue in the Democratic field. Former Vice President Joe Biden had been the frontrunner among black voters, but his dip in the polls suggests he may no longer be viable. That leaves questions about who might carry the torch for black voters moving forward.

That leaves Warren. Gillum’s comments suggest she might be able to boost her waning campaign by picking up support from black voters peeling away from Biden as he drops in the polls.