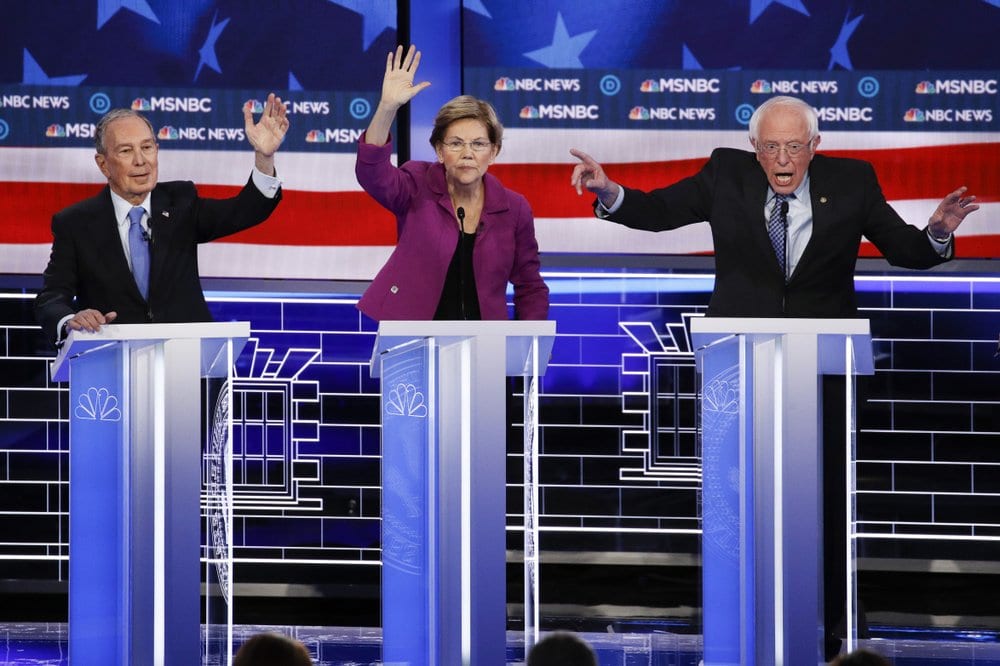 He’s not going away.

His aura suddenly shattered, a defiant Michael Bloomberg sent a pointed message Thursday to a political world grappling with his underwhelming presidential debate debut: He’s not going away.

The New York ultra-billionaire lashed out at leading Democratic rival Bernie Sanders and President Donald Trump, addressing voters face to face in the Super Tuesday state of Utah. That was just hours after struggling to answer dangerous yet predictable questions about his record on race, gender and wealth during a nationally televised beatdown that rattled would-be supporters and thrilled critics in both parties.

Bloomberg didn’t go easy in his own review of the Las Vegas debate:

“How was your night last night? Look, the real winner in the debate last night was Donald Trump,” Bloomberg told a crowd of several hundred in Utah’s largest city.

But then he added: “He thinks I’m going to go away. Wrong, Donald.”

Though never onstage with his rivals before Wednesday night, the former New York mayor has built support in national polls though huge expenditures on polished television ads. He released a campaign finance report Thursday that reminded rivals in both parties of his indisputable advantage in the 2020 contest: Money.

Specifically, the man worth an estimated $60 billion reported spending $409 million through the first nine weeks of his presidential campaign, including $220 million last month alone.

Still, there were signs that his debate performance shook the confidence of would-be supporters who, just 24 hours earlier, believed Bloomberg might be the ideal candidate for the Democratic Party’s anxious establishment to rally behind. Instead, a new reality began to settle in, at least among some prominent donors and political operatives, who acknowledged a stark divide between the strength of Bloomberg-the-brand and Bloomberg-the-candidate.

“I’ve never seen a billionaire get disemboweled before, but good God, that was bad,” said Boyd Brown, a South Carolina-based Democratic strategist who was considering backing Bloomberg earlier in the week. “I don’t see how he bounces back from that.”

Some prominent donors weren’t impressed either.

Rufus Gifford, a leading fundraiser for both of Barack Obama’s presidential campaigns, said, “As a Biden supporter but also someone who respects Mayor Bloomberg, he did nothing last night that encouraged me to look in a different direction.”

Trump and his allies were downright giddy.

Former Trump senior adviser Steve Bannon said he’s not dismissing Bloomberg after one debate given his extraordinary political assets — organization, a sophisticated data operation and an unlimited bank account — yet the “myth of Bloomberg” has been replaced by a new reality.

“Elizabeth Warren skinned him alive in front of the nation. And if you can’t beat Fauxcahontas in February, you’re not going to beat Donald Trump in October,” Bannon said.

The leading Republican strategist said it was “malpractice by his senior advisers” to put Bloomberg onstage before the March 3 Super Tuesday primaries since Bloomberg won’t be on the ballot until then.

Those senior advisers declined to respond to requests for comment, though immediately after the debate, campaign manager Kevin Sheekey noted that Bloomberg hadn’t debated in more than a decade.

“He was just warming up,” Sheekey said.

Meanwhile, Bloomberg’s Democratic rivals were seeking to capitalize on his struggles.

During an appearance outside Las Vegas, Warren said, “Last night was a lot of fun,” because Bloomberg was held accountable.

“I have really had it with billionaires, regardless of party, who think that the rules don’t apply to them,” she said.

In the debate, Warren pressed Bloomberg to say how many nondisclosure agreements his company has signed preventing women from talking about complaints of harassment. She leaned in further on Thursday, saying that when women complain, Bloomberg can “throw a little money on it, put a little gag in the woman’s mouth.”

In his speech, the former New York City mayor assailed only one fellow Democrat, Sanders, the self-described democratic socialist who has emerged as the front-runner in the party’s nomination fight. Bloomberg warned that his party “may very well be on the way to nominating somebody who cannot win in November. And if we choose a candidate who appeals to a small base like Sen. Sanders it will be a fatal error.”

And ignoring his own poor debate debut, he declared himself best positioned to defeat Trump in this fall’s general election.

“We all know that Trump is a bully. But I say, I’m a New Yorker, and I know how to deal with bullies. I did it all the time,” Bloomberg said. “I’m not afraid of Trump and he knows it. And he sees our poll numbers and he is scared.”

Voters won’t have a chance to prove Bloomberg right or wrong until March 3, also known as Super Tuesday, when he will appear on a ballot for the first time.

Utah voter Jo Parrish, a 66-year-old retired residential appraiser, waited in line in the cold to see Bloomberg on Thursday.

Holding a cup of coffee passed out by the campaign, she said she originally liked Joe Biden but fears that Trump’s unfounded attacks against his son have taken their toll. A self-described moderate Democrat, Parrish said Sanders isn’t too liberal for her personally, but she’s not sure he can beat Trump.

Bloomberg’s debate performance didn’t scare her away from Bloomberg.

“I watched the debate, I thought he got picked on,” Parrish said. “He didn’t come across real personable, but I don’t care if he’s personable or not as long as he can beat Trump.”