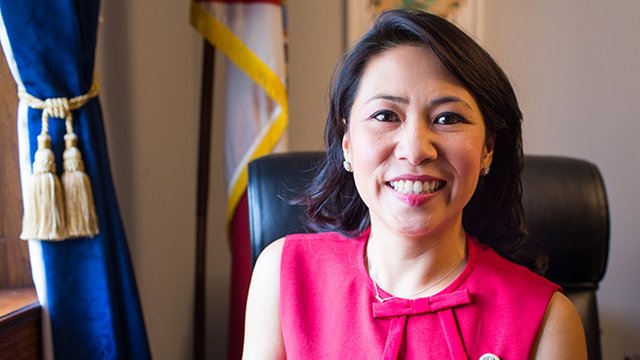 The trio weighed in early in the 2020 race for Florida’s 7th Congressional District, which covers Seminole County and parts of northern and central Orange County, including much of Orlando through downtown.

The endorsements come two weeks after Murphy picked up a challenge from the left in the August primary, from nonprofit leader Sandra Henry.

The announcement also comes as Murphy seeks to deflect criticism from some more progressive groups upset with some of her votes, which have included opposing an effort to limit President Donald Trump‘s war powers and opposing an effort to strengthen unions’ organizing powers. For the latter vote, the Communications Workers of America, one of the more prominent unions in Orlando, last week urged the Democratic Congressional Campaign Committee to stop supporting Murphy.

That’s not the message from Dyer, Demings, and Mina.

“Despite all the chaos in Washington, Stephanie’s pragmatic approach to governing has been key to her long list of bipartisan accomplishments. I’ve known Stephanie for many years,” Dyer wrote in a news release. “She listens, she cares, and she brings people together; that’s the secret to her success. Whether we’re recovering from storms or addressing critical issues like housing, climate change, gun violence, and income inequality, Stephanie never hesitates to roll up her sleeves and deliver for Orlando. I whole-heartedly endorse her re-election.”

“Stephanie Murphy is a champion for Orange County families, and I proudly endorse her re-election campaign. From housing and homelessness to strengthening schools and infrastructure to promoting equality and opportunity, Stephanie has delivered time and again for Orange County. As sheriff and now mayor, I have always been able to count on Stephanie, and I urge people to send her back to Congress to fight for us,” Demings said.

“She is a powerful and effective leader in the movement to end gun violence, and she has helped secure significant anti-terrorism funding. I’m grateful to have a leader like Stephanie in Congress, and I’m proud to support her re-election,” he said.

Murphy is seeking a third term in November.

“I’m incredibly honored to receive the support of these three great leaders in Orange County,” Murphy said in the news release. “Mayors Demings and Dyer, along with Sheriff Mina, have been terrific allies as we work together to improve the lives of all Orange County residents. I look forward to continuing to work with them as we make central Florida an even better place to visit, work, and raise a family.”

previousWho is No. 1? Whoever gets to fill out 2020 Census form