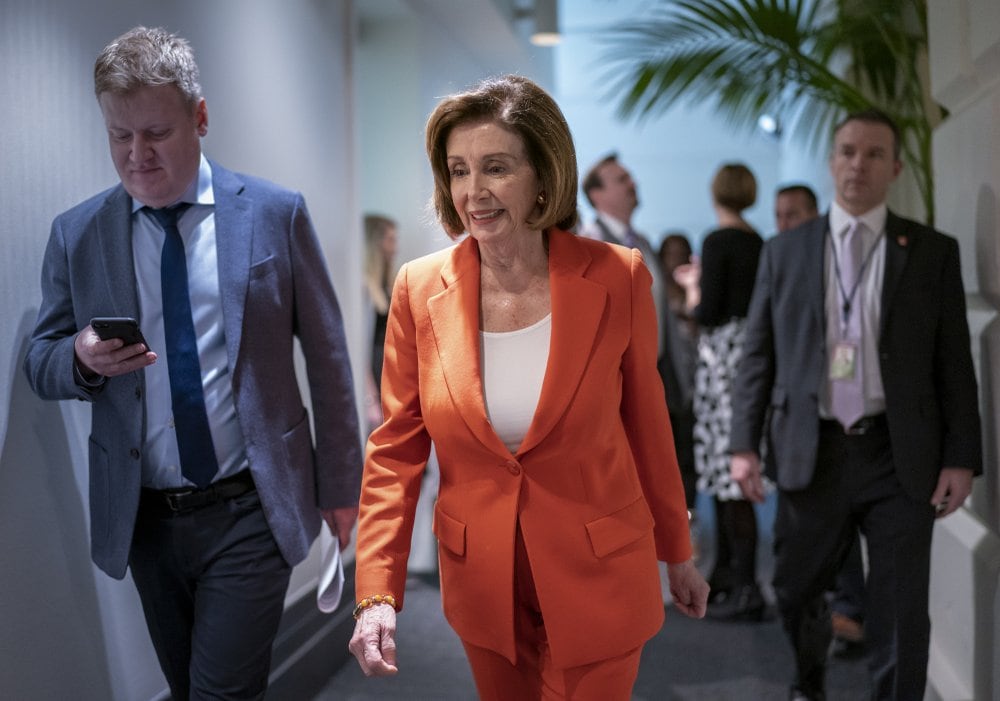 Other Democrats are more open about their fears of a Sanders’ nomination.

U.S. House Speaker Nancy Pelosi on Wednesday urged party unity amid Bernie Sanders’ surge in the presidential race, even as House Democrats worry about a volatile election season that could put a self-described democratic socialist atop the ticket and threaten their majority.

“I would hope that everyone would say, no matter who the nominee is for President, we wholeheartedly embrace that person,” Pelosi, a California Democrat, told the House Democratic caucus at a closed-door meeting,

”’We cannot show any division. This has to be about unity, unity, unity,” she said, according to a Democratic aide who attended the session. The aide was not authorized to discuss the private meeting and spoke on condition of anonymity.

Down-ballot jitters are apparent as the Vermont Senator takes an increasingly commanding lead in early voting and withstands the constant pummeling by rivals who have been unable to slow his rise.

With South Carolina’s primary on Saturday, followed by the Super Tuesday contests on March 2, House Democrats are navigating how best to hold onto their seats while opponents try to lasso them to Sanders’ socialist label.

Many first-term Democrats are counting on their own well-crafted brands, not the party’s eventual presidential nominee, whoever that may be, to see them to reelection. The House majority was built by lawmakers who come from districts where President Donald Trump is popular, and his campaign operation will be turning out voters in the fall. But in a campaign cycle full of unknowns as the party tries to unseat Trump, they are relying on the backgrounds that pushed them to office in the first place to do it again.

“I will go into my race with the same degree of confidence, no matter who is at the top of the ticket,” said Rep. Tom Malinowski, a freshman Democrat from a competitive New Jersey district, who supports former Vice President Joe Biden in the primary.

Malinowski, said he will “absolutely” support Sanders if the Senator becomes the party’s nominee. But the congressman said Democrats need to simplify their message and seize the moment with a candidate who can topple Trump.

“Why we would risk this extraordinary opportunity by nominating somebody who has a tendency to divide our own side is beyond me,” he said.

Other Democrats, though, are more open about their fears of a Sanders’ nomination.

First-term Rep. Elaine Luria, who defeated an incumbent Republican in 2018 in a swing district in coastal Virginia, said a Sanders candidacy would be “incredibly divisive” and could endanger more centrist members of Congress like herself.

Her opponents are already trying to tag Luria, a former Navy commander and Naval Academy graduate, as a “socialist,” she said. Luria rejects the label as “ridiculous.”

She has endorsed Biden, but had praise for former New York Mayor Mike Bloomberg, calling them politicians who “build bridges rather than break them down.”

Hoping to propel Biden’s lagging candidacy in a state he has pledged to win, the No. 3 House Democrat, Rep. Jim Clyburn of South Carolina, an influential leader and the highest-ranking African American in Congress, announced his endorsement on Wednesday.

Veteran Democratic Rep. David Price of North Carolina said of Biden: “There’s not a congressional district in this country he couldn’t campaign in.”

Divisions run deep among House Democrats, whose primary preferences span the party’s ideological reach, from the most liberal and progressive members backing Sanders to those preferring Biden, Bloomberg or the other more centrist candidates.

Freshman Democratic Rep. Alexandria Ocasio-Cortez of New York is one of Sanders’ most high-profile backers in the House, an electrifying campaign surrogate. U.S. Rep. Ro Khanna, a California Democrat, is a Sanders campaign co-chairman.

Many liberals say Sanders is the only candidate able to energize base voters and take on Trump. His commitment to curbing income inequality and his bold policy proposals, including “Medicare for All” and tuition-free college, are galvanizing voters, they say. They point to Sanders’ strong showing in Nevada as a snapshot of the coalition he could build nationwide against Trump.

In Tuesday night’s presidential debate, candidate Pete Buttigieg warned of the potential down-ballot consequences in Congress if Sanders won the nomination. Senate Democrats are struggling to flip the chamber from Republicans, who have a slim majority, while House Democrats are working to retain their advantage.

Pelosi said she thinks that “whoever our nominee is, we will enthusiastically embrace — and we will win the White House, the Senate and the House of Representatives.”

House Democrats hold a modest majority, more than a dozen seats, and while Trump is eager to have his party in control of the chamber, House Republicans have seen a rush toward the exits with retirements. The House GOP is still recruiting candidates to challenge the Democrats and has lagged in fundraising.

Pelosi said lawmakers will have a briefing Thursday at the Democratic National Committee headquarters about the nominating process. The party convention is in July.

Democrats changed the nominating rules to reduce the power of “super delegates” — lawmakers and other VIPs — to choose the nominee.

If no candidate secures the nod outright on initial round voting at the convention, the super delegates, including lawmakers, may have a role to play in casting votes.

At an earlier debate in Las Vegas, the 2020 candidates were asked whether the candidate with the most delegates should be the nominee, even if that person lacked a delegate majority. Almost every candidate suggested that the convention process should work its way out.

Sanders, who helped force the changes to the nomination process this year and expects to take a significant delegate lead in the coming weeks, was the only exception.

“The person who has the most votes should become the nominee,” he said.

House Democrats, particularly the freshmen, are being told to chart their own course as they did running in 2018.

In much the way some House Democrats won their seats as they distanced themselves from Pelosi, they may be faced with running for reelection by distancing themselves from the party nominee.

“This is tough,” Pelosi told the House caucus. “We have to win.”