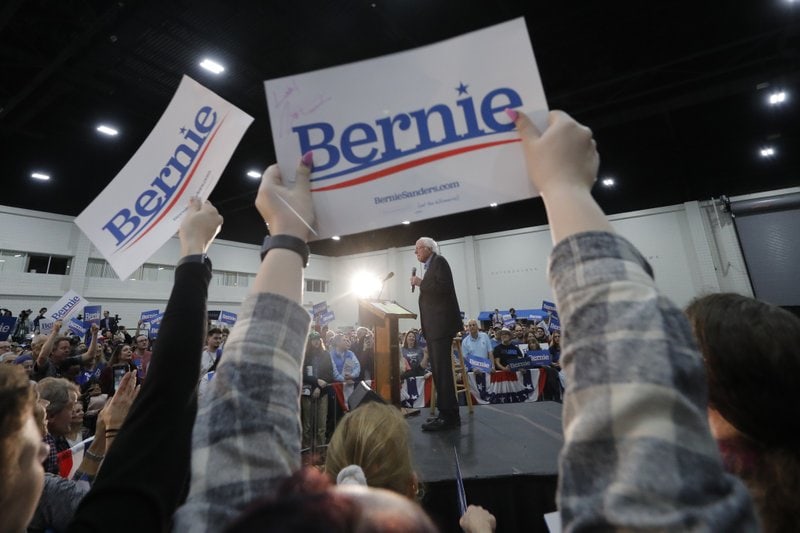 “I’ll cross that bridge if I come to it."

Sen. Bernie Sanders’ ascendancy as Democrats’ leading presidential hopeful fueled growing unease as lawmakers openly expressed anxiety that the self-proclaimed democratic socialist could cost them House control and questions abounded over what party leaders should do.

House Speaker Nancy Pelosi, a California Democrat, projected calm — and neutrality — on Wednesday as she batted away reporters’ queries about whether it was time for her to try thwarting Sanders to protect her party’s majority.

“We’re not going to lose the House,” she said. “We’re going to be united by whomever is the candidate for president. But we are taking responsibility for winning the House, and we’re not assuming anything. But we feel very confident.”

She delivered a similar message to colleagues at a closed-door meeting Wednesday morning, when she told them, “We cannot show any division. This has to be about unity, unity, unity.” Her remarks were described by a Democratic aide on the condition of anonymity to relay private comments.

Yet with Sanders, a Vermont Independent, riding high after early nominating contest wins in New Hampshire and Nevada and a virtual first-place tie in Iowa, other House Democrats were less sanguine.

Time was growing short to head Sanders off. South Carolina holds its primary Saturday, followed three days later by Super Tuesday, when contests in 14 states and one territory will decide one-third of the delegates to this summer’s Democratic convention.

Rep. Tom Malinowski, a freshman from a closely divided New Jersey district, said Democrats have “a simple path” to defeating President Donald Trump by focusing on health care, the economy and a promise that their presidential candidate won’t lie. “I don’t want to squander that opportunity” by nominating a contender who divides Democrats, he said in an unspoken reference to Sanders.

Freshman Democratic Rep. Elaine Luria of Virginia, who defeated an incumbent Republican in 2018 in a swing district in coastal Virginia, said a Sanders candidacy would be “incredibly divisive” and endanger more centrist lawmakers like herself. The former Navy commander said of GOP efforts to paint all Democrats as socialists, “Bernie Sanders just adds fuel to that fire.”

California Democratic Rep. Scott Peters, a leader of his party’s House moderates, said there is widespread concern among lawmakers from competitive districts “that a Sanders candidacy would sink their reelections.”

Peters, whose San Diego district is safely Democratic, said Sanders would complicate moderates’ reelection bids because “the face of the Democratic Party might be spouting things that are absolutely anathema to your voters.” Sanders’ advocacy for “Medicare for All,” the Green New Deal and student loan forgiveness has alienated many moderates.

Of the 42 House seats Democrats gained in 2018 when they captured the majority, 29 are from districts that Trump either won in 2016 or lost by a narrow 5 percentage points or less. Most of them are moderates.

Asked what Pelosi was doing about Sanders, Peters said, “I hope that we do have a conversation as a party” about his impact on endangered Democrats.

Hours after No. 3 House Democratic leader James Clyburn endorsed former Vice President Joe Biden for the Democratic nod, Clyburn declined to say Wednesday whether it was time for Pelosi to speak up. “I don’t tell people what to do politically,” Clyburn, from South Carolina, told reporters.

Asked if Sanders would cost Democrats the House, Clyburn said, “I don’t know if he will or not. It’s not a chance I want to take.”

Speaking on the condition of anonymity, one Democratic lawmaker from a competitive district said many party moderates were eager for Pelosi to do something to hinder Sanders’ drive toward the nomination.

No lawmakers interviewed specified what leaders could do to help sidetrack Sanders. Any action they took would risk backfiring by antagonizing liberal voters who all Democrats will need this fall.

Sanders’ rise has put many Democrats in a delicate situation similar to what many Republicans faced four years ago. As Trump roared toward the GOP nomination, his anti-immigrant views and personal foibles soured Republican congressional candidates, but many chose not to abandon him and risk alienating their party’s base, conservative voters.

Underscoring the tricky political terrain they face, several vulnerable Democrats said Wednesday that they would back whoever their party’s nominee is, but stopped short of saying they would campaign with Sanders.

“We haven’t gotten that far yet,” said Rep. Lucy McBath from a closely divided district outside Atlanta.

“I’ll cross that bridge if I come to it,” said Michigan Rep. Elissa Slotkin, from a Lansing-area district that leans toward the GOP.

Some of Congress’ most liberal Democrats have endorsed Sanders. One of them seemed to apply pressure on Pelosi on Wednesday to not undermine him.

Democratic Rep. Pramila Jayapal of Washington said Pelosi “plays a very important role in staying neutral and calming everybody down.” She said Pelosi and other leaders who have not endorsed a candidate should continue that stance.

“They’re going to have to win the votes for their own leadership positions within the caucus, and I think that weighing in would not be appropriate for the speaker,” Jayapal said. The House majority party elects the speaker for every new Congress.

Democratic Party officials will brief lawmakers Thursday on the rules that will govern their nominating convention this summer in Milwaukee. The party has weakened the clout of superdelegates, who include members of Congress, but they could play an important role if the convention does not choose a nominee during the gathering’s first ballot.