In nation's top tourism destination, an effort to remain calm as coronavirus threatens 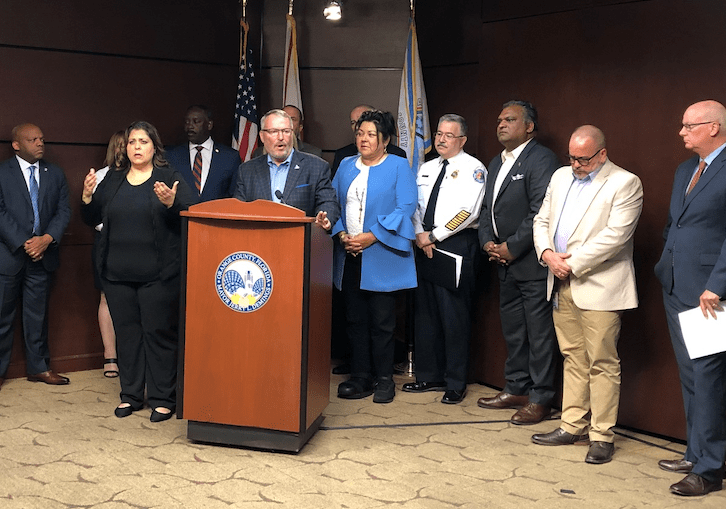 Orlando Mayor Buddy Dyer and Orange County officials assure that all precations are being taken to prevent a coronavirus outbreak in Central Florida.

All remains calm in Orange County and Orlando where officials say they are taking all necessary precautions for a potential coronavirus outbreak in the world’s biggest tourist and visitors mixing bowl.

Orlando Mayor Buddy Dyer, Orange County Mayor Jerry Demings and area health, safety, tourism and convention leaders gathered Monday afternoon to assure Central Florida’s resident population and the tens of millions of visitors planning to visit this year, that from public venues to hospitals officials are taking all available steps to keep the virus out of Orlando and to contain any outbreak that may come.

Federal health officials on Monday confirmed the first two coronavirus cases in Florida — neither of them in Central Florida. Though officials conceded the region, its 3 million residents, and its 75 million annual visitors are at some risk. Still, they gave all the assurances they could that for now there is no reason for anyone to be alarmed.

“We at Orange County have been monitoring and planning for the day that the coronavirus becomes a public health emergency in our community. And that day, of course, is today,” Demings said. “With two cases in Florida, but well outside of Orange County, we believe it is a matter of time before we have a case right here in our back yard. We want to emphasize that while the coronavirus moves at a fast pace, we have remained calm and are working behind the scenes with our partners at the Florida Department of Health. … If a case occurs in Orange County we have protocols and procedures in place.”

Demings emphasized the area leadership’s experience. He has been Mayor or Sheriff for 12 years, and Public Safety Director and Police Chief before that. Dyer has been Orlando Mayor for 17 years. Between them, they’ve seen plenty of hurricanes and other public health and safety crises.

“We’re prepared. There is no reason to panic,” Dyer said. “We have a long history of working with our partners to follow the lead of Orange County and the Department of Health.”

Dr. Raul Pino, Orange County health director with the Florida Department of Health, said he does not think an outbreak is likely in Orange County.

“There is no reason to panic,” he said.

“I will tell you right now we have seen no visible impact to our industry to date,” Aguel said. “In fact, we’ve … only seen a handful of inquiries so far.”

Nonetheless, officials said they have plans in place to take dramatic steps, potentially including closures of some gathering spots, should the coronavirus lead to an unexpected serious outbreak in Central Florida.

Elsewhere France has shut down the Louvre museum, The Walt Disney Co. has decided to temporarily shutter Tokyo Disneyland, and Universal Parks and Resorts has done the same with Universal Studios Japan. The Swiss and French governments have banned gatherings of 1,000 or more.

He said the protocols “would be consistent with the protocols that have been instituted across the state of Florida as well as across America,” Demings added.

He called on Pino to elaborate.

“The short answer is, yes, we are prepared. We have different plans for different scenarios that we exercise. That is the extreme. We are hoping that doesn’t happen. I think our main job is to prevent an outbreak from happening,” Pino said.