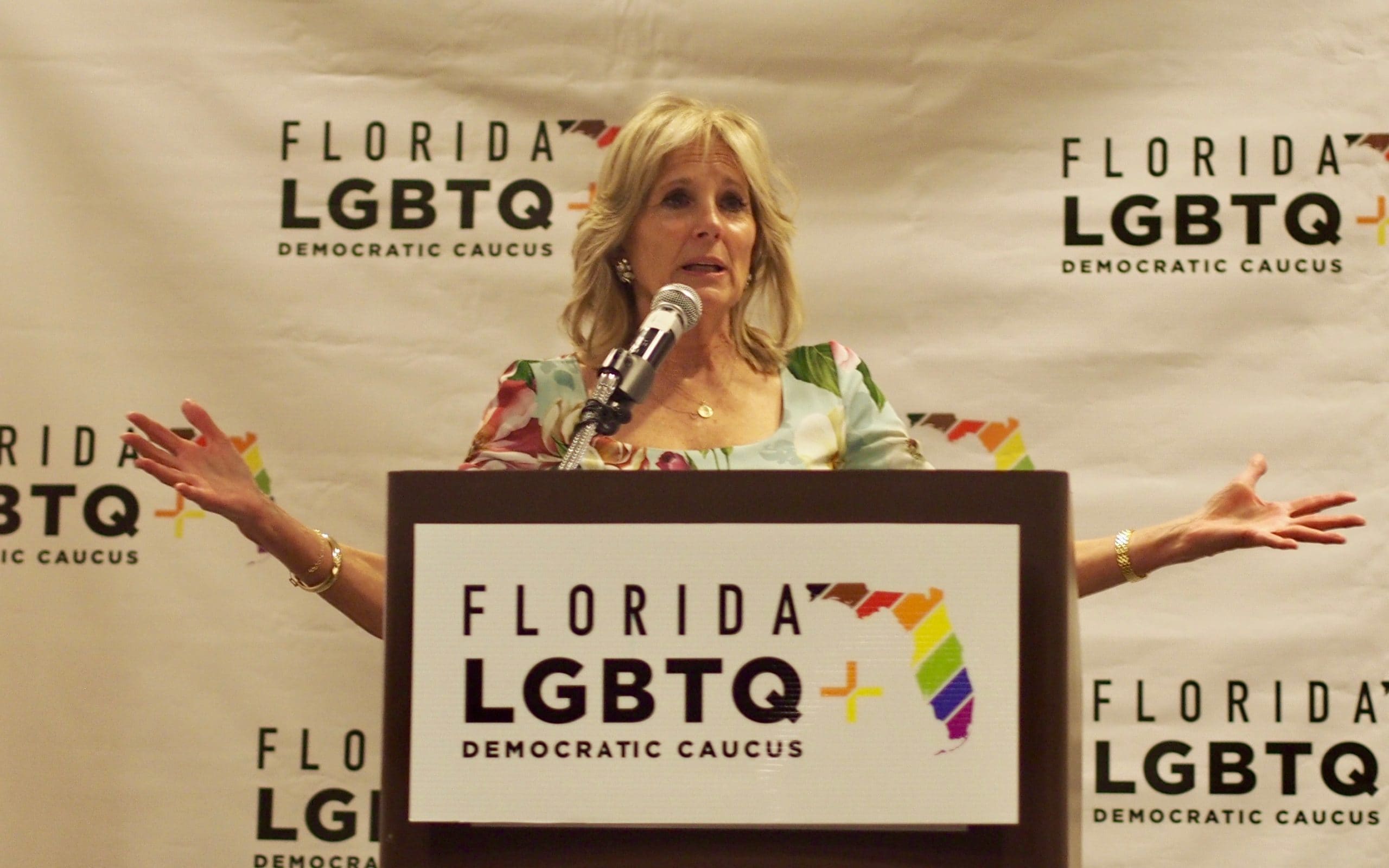 If the reception Jill Biden received Saturday night in Orlando is any indication, former Vice President Joe Biden is going to do very well with the LGBTQ vote in Florida.

The former Second Lady spoke to an excited conference banquet of about 125 people of the Florida LGBTQ+ Democratic Caucus, portraying her husband as a big part of the social acceptance and political and legal gains that the gay community received during the administration of President Barack Obama.

And she pledged it would continue if Joe Biden is elected president. She assured them, among others, that he intended to enact the federal Equality Act, banning discrimination on the basis of sexual orientation, in his first 100 days in office.

“He’s going to stop violence against the LGBTQ community, especially against transgender women of color. He’s going to reverse the transgender military ban and ensure that every American who is qualified to serve in our military can do so without having to hide who they are,” Mrs. Biden added, drawing rousing applause.

This was a gathering that already largely supported Joe Biden, even over his Democratic rival Vermont Sen. Bernie Sanders, less than two weeks before Florida’s March 17 Democratic presidential primary.  A survey taken earlier in the day at the conference found 84 percent support for Biden. And numerous people at the dinner held Florida for Biden signs.

Mayor Demings and Gaskill used the occasion to announce their endorsements of Biden.

Mayor Demings’ wife U.S. Rep. Val Demings also spoke, delivering the keynote address. But while she had endorsed Biden on Thursday and while she is frequently mentioned as a potential running mate for him should he win the nomination, she did not mention Biden in her speech. Instead she gave a broader speech about the promise of America and how the Democratic Party must protect that.

Earlier in the day, Sanders’ pitch was made to the caucus by Cynthia Nixon, the “Sex in the City” star [she played Miranda] who ran for governor in New York in 2018, losing in the Democratic primary. Nixon gave the luncheon address.

Mrs. Biden contrasted America under President Donald Trump with a time, under the Obama-Biden administration, when she said America was coming together, through activism, law changes, and brave and intimate discussions at kitchen tables and coffee shops.

“People dared to be honest. They’d talk with their families and their friends even when they were terrified that they’d lose them. People who shared their stories and beared their broken hearts. They, you, changed our country. And our laws changed with it,” she said.

“This is how progress is being made, by reaching across the divide, by building relationships, by realizing our differences are precious, and our similarities are infinite,” she continued. “Joe has spent his entire career bringing people together to do the seemingly impossible.”

She pointed out her husband wrote and pushed through the Violence Against Women Act. She said he introduced the first-ever climate change bill, stood up to the National Rifle Association, and won the votes in Congress to approve the Affordable Care Act.

“He’s a real Democrat, who can lead our party,” she said, in one of the few references, all veiled, that she made to Sanders, technically an independent following a Democratic socialism theme.

“He’s the only candidate who can lead a winning ticket and give us a blue wave we need to actually get these laws signed,” she said of her husband.

Mrs. Biden and the other speakers all made clear they believe that Trump must be stopped. She accused Trump of rolling back many of the Obama-Biden initiatives, including gains won by the LGBTQ community during that era.

“We’ve had to watch as Donald Trump attempted to destroy so many of the gains that we have achieved,” she said.

That was a theme that Cruz also visited.

“Please, God, don’t let this be the new norm that people can hate out loud, because isn’t that what he has done, making it ok for people to hate out loud?” Cruz exclaimed Cruz. “It is time to return dignity to the office of the president.”

previousLee County coronavirus death was a Florida woman in her 70s