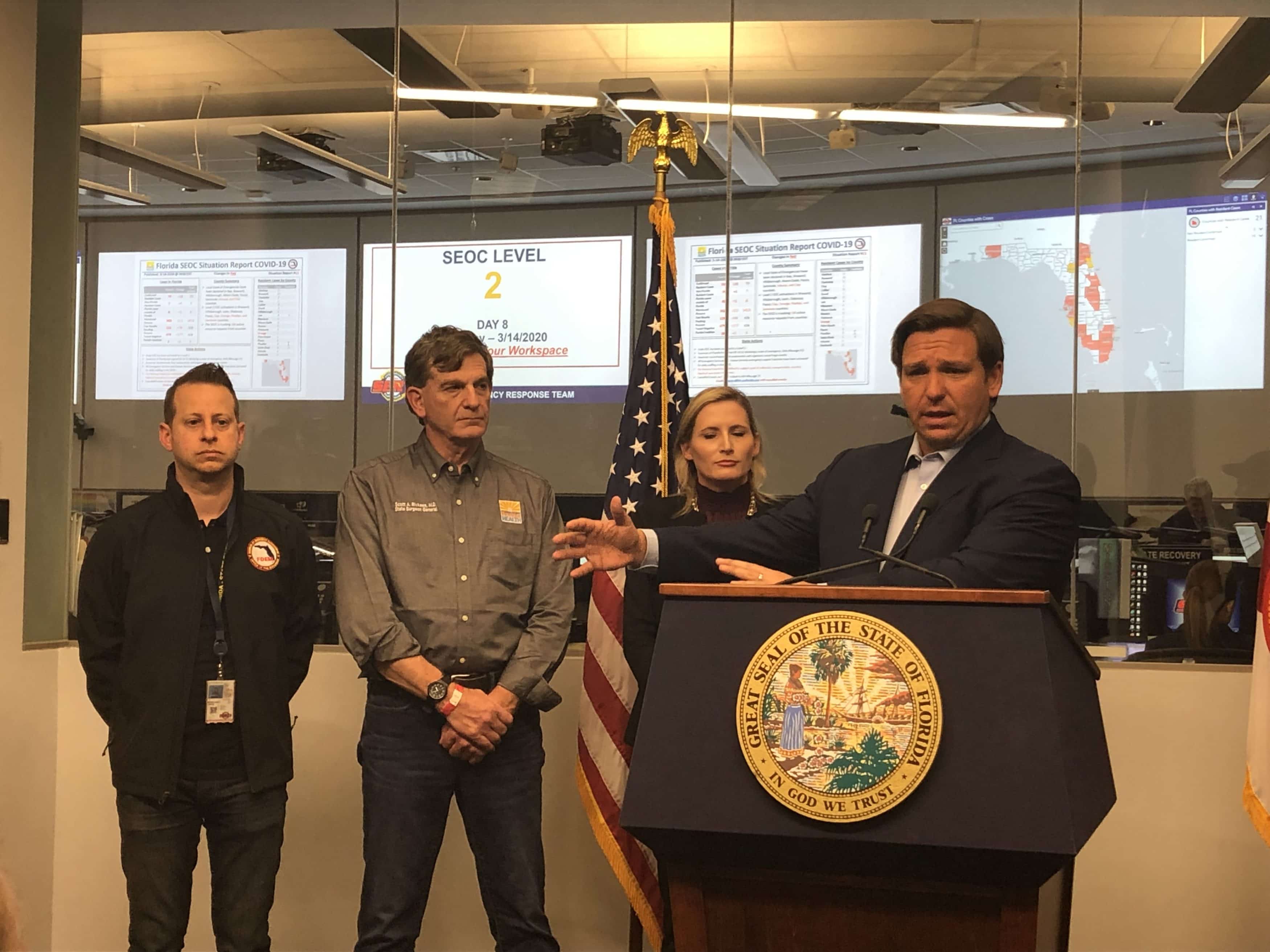 Officials would not offer an exact number of epidemiologists it would hire.

The state state is elevating its emergency operation response level Saturday and hiring additional epidemiologists to combat the spread of the new coronavirus.

Gov. Ron DeSantis made the announcement alongside leaders in the state’s response to the disease.

Speaking from the Division of Emergency Management‘s (DEM) State Emergency Operations Center (EOC) in Tallahassee, DeSantis told reporters there is now evidence of community spread with three cases in Broward County not linked to foreign or domestic travel.

“We’ve been operating under the assumption — with everything we’re doing with mitigation measures — assuming you were going to see spread in some portion of Florida’s communities,” he said.

And DeSantis lauded President Donald Trump for adding the United Kingdom and Ireland to the international travel ban list. Several of the state’s cases are people who visited Egypt, Iran, Ireland and New York.

Surgeon General Scott Rivkees would not say how many epidemiologists the state plans to hire. But he noted the Department of Health (DOH) on Saturday morning reached out to public schools of health to create a plan to make health experts available to the state.

DeSantis said the additional assistance is needed because DOH officials are not just conducting their investigations from local departments of health but private services that return positive test results.

“These folks at the Department of Health have been working around the clock,” he said. “This is very labor-intensive when you’re talking about these types of investigations.”

On Saturday, the Governor asked the U.S. Department of Health and Human Services to return 61 Floridians currently housed at Dobbins Air Force Reserve Base in Georgia who were on the Grand Princess.

“I think it’s much better for everyone if they could be safely brought back and could be able to get back to their homes,” he said.

“We don’t have a testing capacity issue as far as kits in the state on Florida just based on the purchases we’ve made on behalf of the Governor’s direction.

The state has 478 negative results and DOH is waiting on the results for 221 pending tests. But with LabCorp and other private groups taking results from doctors’ offices, there may be a lag time in reporting.

Additionally, the state has monitored 14,013 individuals to date and is currently monitoring 365 people.

Broward County has 24 confirmed cases, including the three whose sources are under investigation. Eleven cases are linked to international travel, six are related to cruise ships, one is a Georgia resident and two others had close contact with another confirmed case.

The Governor has asked state agencies to suspend renewal requirements for drivers licenses and occupational licenses for 30 days.

“We don’t want people to have to worry about that right now while they’re dealing with the effects of COVID-19,” he said.

And DeSantis has waived the weight restrictions on highways to allow DEM to transport supplies to its facilities as it stockpiles key supplies. Additional lab test kits, swabs, respirators, ventilators, gowns, face masks and shields, googles, gloves shoe covers and other protective equipment are either en route or already at EOC.

Unlike in a hurricane, Mowskowitz said resuppling department stores is not an issue and encouraged people to continue buying supplies.

The Governor ordered Moskowitz to raise EOC’s activation level to Level 1. At that level, DEM personnel will fully staff the center and emergency support functions.

The next day, the Governor suspended travel for state employees and recommended large events be canceled. However, he said Saturday that he does not foresee directing any public functions to close, rather events and the state will continue to work collaboratively.

And on Friday, DeSantis barred all visitors to nursing homes, assisted living facilities, group homes and long-term care homes in Broward County for 30 days after several more people tested positive for the coronavirus.