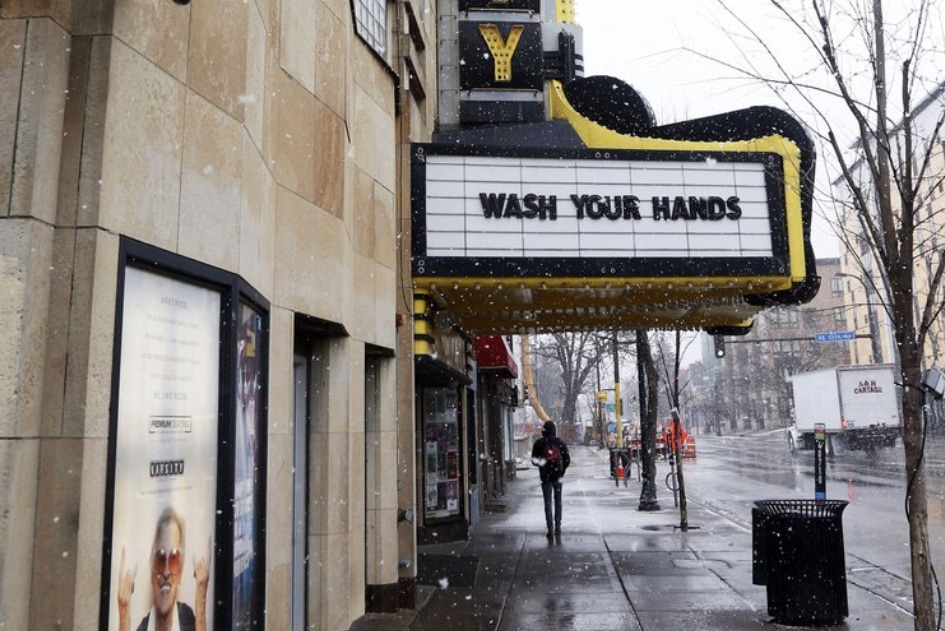 'Invisible Man,' 'The Hunt,' 'Emma' up for rental as early as Friday.

U.S. movie theaters have closed nationwide due to the coronavirus pandemic, turning dark nearly all of the country’s 40,000-plus screens in an unprecedented shutdown.

The largest chains had tried to remain open even as Hollywood postponed its upcoming release plans and guidelines for social distancing steadily diminished the recommended size of crowds.

But after President Donald Trump on Monday urged against gatherings of more than 10 people, AMC Theaters, the nation’s largest chain, said Tuesday its theaters would close altogether.

AMC said the latest guidelines made movie theater operations “essentially impossible.” It said it would close all locations in the U.S. for at least six to 12 weeks. Regal, the second largest chain, said Monday that its theaters would close until further notice.

With movie theaters locked down for the foreseeable future, some studios took the extraordinary step of funneling new or recently released films onto home viewing platforms. Universal Pictures said Monday it will make its current and upcoming films available for on-demand rental, becoming the first major studio to break the traditional theatrical window of 90 days due to the pandemic.

The studio said it will put movies currently in theaters — “Invisible Man,” “The Hunt,” “Emma” — up for rental as early as Friday. It also said that “Trolls World Tour,” one of the only major releases left on the April calendar, will debut in theaters and on-demand services simultaneously. A 48-hour rental will cost $19.99.

Most of Europe’s cinemas have already shut down, as have those in China, India and elsewhere. North America’s shutdown came gradually. On Sunday, the mayors of New York and Los Angeles ordered their cities’ theaters closed. Governments in Massachusetts and Quebec also closed theaters.

Cinemark, the nation’s third-largest chain, hasn’t yet announced closures. But chains like the Alamo Drafthouse, Landmark Theatres, Showcase Cinemas and Bow Tie Cinemas have closed. Most of those that haven’t yet declared themselves closed are expected to do so this week.

The Alamo Drafthouse put an “Intermission” card up on its website.

“This news – this situation – is devastating,” the 41-theater circuit based in Austin, Texas, wrote. “When we re-open after this unprecedented and indefinite hiatus, it will be in a dramatically altered world, and in an industry that’s been shaken to its core.”

Over the weekend, ticket sales plunged to their lowest levels in at least 20 years at U.S. and Canadian theaters. Not since a quiet September weekend in 2000 has weekend box-office revenue been so low, according to data firm Comscore.

Universal’s move could be seen as either a watershed moment for Hollywood or an aberration due to extreme circumstances. With few exceptions, the major studios have guarded the 90-day exclusivity window even as digital newcomers like Netflix and Amazon have challenged it. For the studios, box office still is the primary revenue generator. Last week, the Motion Picture Association said worldwide ticket sales reached $42.2 billion last year.

The National Association of Theater Owners, the trade group that represents movie exhibitors, declined to comment.

NBCUniversal is prepping its own streaming service, dubbed Peacock, but it isn’t to launch until July 15. On Sunday, the Walt Disney Co. made “Frozen 2” available on its streaming service, Disney Plus. But that film had already completed its theatrical run. Its digital release didn’t break the traditional 90-day theatrical exclusivity window.

Still, Hollywood’s major upcoming releases aren’t currently heading for the home; they’re being held for when theaters reopen. Paramount Pictures’ “A Quiet Place Part II,” earlier slated for release Friday, has been removed from the schedule. Disney’s “Mulan” and the James Bond film “No Time to Die” have been put off. Universal earlier pushed its latest “Fast and Furious” movie, “F9,” from late May to April of next year.

The boutique studio A24 said Monday that it will re-release the acclaimed “First Cow,” which opened in limited release March 6, later this year, since its initial bow has been marred by theater closures.

previousPoll workers not showing up in Palm Beach County

nextWhat could quarantines and cancellations mean for businesses' legal exposure?