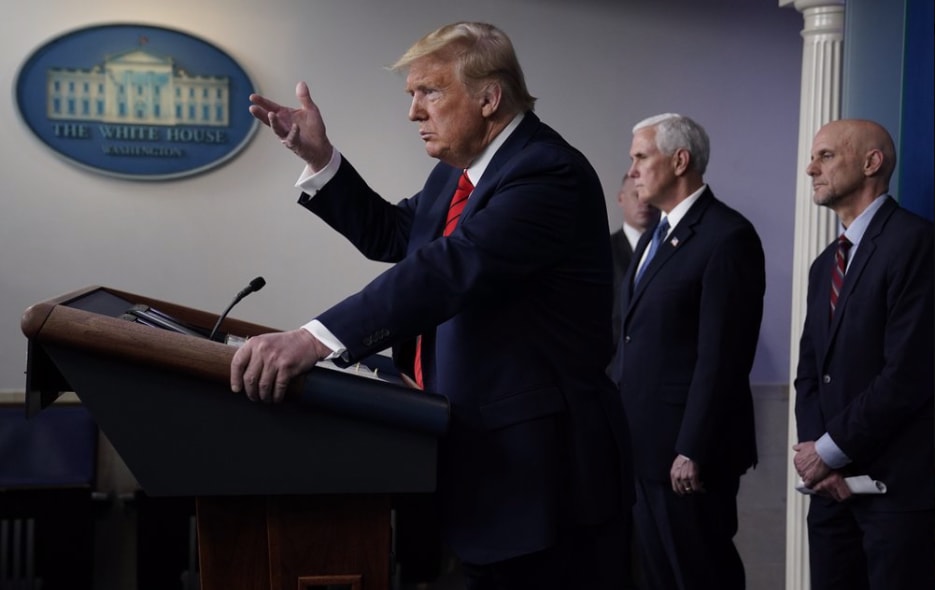 Yet Trump indicated he's trying to stay out of direct congressional negotiations for $1 trillion package.

President Donald Trump said Thursday the government should take an equity stake in companies that need bailouts because of the devastating effects of the coronavirus on the U.S. economy.

During what is now a daily briefing on the federal response to the new coronavirus pandemic crisis, Trump said he has executive authority to curb the impact on businesses. “There’s a lot of executive power,” he said. “If we don’t have to use it, that would be a good thing, not a bad thing.”

Such a move would be an extraordinary reach by government into the private sector. He said he’d specifically target companies that did stock buybacks, rather than investing in infrastructure.

He said that in response to a question about the airlines’ financial activities.

Airlines, hotels, cruise ship companies and others have been identified for potential bailouts in the proposed economic bailout package that Trump and Treasury Secretary Steven Mnuchin first described in some detail Tuesday. Mnuchin has been taking the lead negotiating the package with congressional leaders, facing mounting opposition for some of the proposal’s details, including the industry bailout plans.

Trump reported Thursday on therapeutic drugs that might hold potential to treat those suffering with COVID-19 and stepped up criticism of China for not telling the world earlier about what has become a pandemic.

“More help is on the way,” Trump said at a White House briefing on the spread of the virus.

Trump and FDA commissioner Dr. Stephen Hahn described several approaches under testing, such as chloroquine, a drug long used to treat malaria; remdesivir, an experimental antiviral that’s being tried in at least five separate experiments, and possibly antibodies culled from the blood of COVID-19 patients after they recover. But no new and imminent treatment was announced.

Chloroquine is widely available now and could be used off-label, but Hahn said officials want a formal study to get good information on safety and effectiveness.

“We’re looking at drugs that are already approved for other indications” as a potential bridge or stopgap until studies are completed on other drugs under investigation, Hahn said.

Trump, who planned to visit the Federal Emergency Management Agency on Thursday, has invoked rarely used emergency powers to marshal critical medical supplies against the coronavirus pandemic. Trump also signed an aid package — which the Senate approved earlier Wednesday — that will guarantee sick leave to workers who fall ill.

The pandemic was starting to show its effects in the job market. The Labor Department reported Thursday that the number of Americans filing new claims for unemployment benefits surged last week by 70,000.

The Canada-U.S. border, the world’s longest, was effectively closed, save for commerce and essential travel, while the administration pushed its plan to send relief checks to millions of Americans.

Trump says he is expanding the nation’s diagnostic testing capacity and deploying a Navy hospital ship to New York City, which is rapidly becoming an epicenter of the pandemic, and another such ship to the West Coast. And the Housing and Urban Development Department is suspending foreclosures and evictions through April to help the growing number of Americans who face losing jobs and missing rent and mortgage payments.

On Wednesday the Senate overwhelmingly passed a second coronavirus response bill, which Trump signed Wednesday night. The vote was a lopsided 90-8 despite worries by many Republicans about a temporary new employer mandate to provide sick leave to workers who get COVID-19. The measure is also aimed at making tests for the virus free.

Meanwhile the administration pushed forward its broad economic rescue plan, which proposes $500 billion in checks to millions of Americans, with the first checks to come April 6 if Congress approves.

The White House urged hospitals to cancel all elective surgeries to reduce the risk of being overwhelmed by cases. The president was pressed on why a number of celebrities, like professional basketball players, seemed to have easier access to diagnostic tests than ordinary citizens.

The government has told Americans to avoid groups of more than 10 people and the elderly to stay home while a pointed reminder was given to millennials to follow the guidelines and avoid social gatherings. But officials urged younger people to donate blood, saying it is safe to do so.

The Defense Production Act gives the president broad authority to shape the domestic industrial base so that it is capable of providing essential materials and goods needed in a national security crisis. The law allows the president to require businesses and corporations to give priority to and accept contracts for required materials and services.

The executive order issued by Trump gives Health and Human Services Secretary Alex Azar the authority to determine “the proper nationwide priorities and allocation of all health and medical resources, including controlling the distribution of such materials … in the civilian market, for responding to the spread of COVID-19 within the United States.” It also applies to certain health services.

Azar released a statement Wednesday night, saying, “we are coordinating closely with private suppliers, healthcare purchasers, and our federal partners like the Commerce Department to ensure that resources are going where they’re needed.”

Trump also said he would soon invoke a rarely used federal statute that would enable the U.S. to tighten controls along the southwest border because of the new coronavirus, based on a recommendation of the U.S. surgeon general.

The president said the law, intended to halt the spread of communicable diseases, would give authorities “great latitude” to help control the outbreak. Earlier, U.S. officials told The Associated Press that the administration would invoke the law to immediately turn back all people who cross the border illegally from Mexico and to refuse people the right to claim asylum there.

More than eight weeks after the first U.S. case of the virus was detected, the federal government is still struggling to conduct widescale testing for the virus. Compounding the problem, laboratories are reporting shortages of supplies needed to run the tests, which officials urged to be given to those most likely to have COVID-19.

Deborah Birx, who is coordinating the White House response, cautioned that there has been a backlog of swabs waiting in labs to be tested, and as that backlog clears “we will see the number of people diagnosed dramatically increased” in the next few days.

Asked about the administration’s mixed messages when it comes to the threat posed by the virus, Birx said new studies about how long the virus can be transmissible on hard surfaces helped prompt the administration’s tightening of recommendations on social distancing. “None of us really understood” that, she said. “We’re still working out how much is by human transmission and how much is it by surface.” She added, “Don’t exposure yourself to surfaces outside the home.”

Birx said there have been “concerning reports” from France and Italy about young people becoming seriously ill. The task force last week urged young generations to avoid going out to bars and restaurants and to avoid groups of more than 10 people.

“We cannot have these large gatherings that continue throughout the country for people who are off work,” Birx said. She added that the federal pandemic task force so far has not seen any “significant mortality” in children.

next$10 toilet paper? Coronavirus gouging complaints surge in US