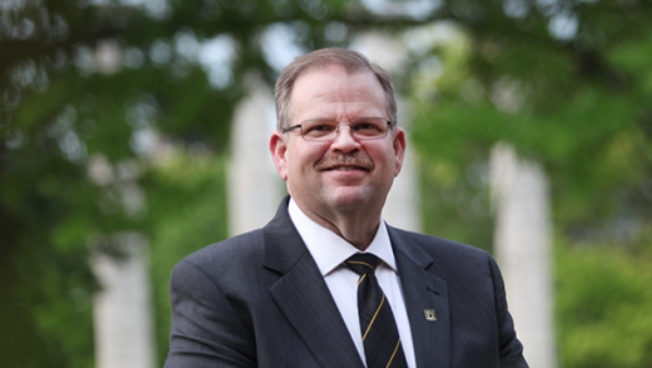 University of Missouri Chancellor Alexander Cartwright has been selected as the next president of the University of Central Florida.

Cartwright will become UCF’s sixth full-time president, taking an office that has been held for 13 months by Interim President Thad Seymour.

Cartwright was selected Friday after a nearly year-long search that was suspended for a while last year because the university still was going through political fall-out from a spending scandal that had cost the last leader, former President Dale Whittaker, and others at the university their jobs.

Earlier this month UCF’s presidential search committee had narrowed a search from 45 applicants to three finalists. But two of those finalists withdrew. In the midst of that series of events, Cartwright emerged as a late-entry, someone whose candidacy was kept under wraps until Wednesday.

In fact, in speaking at a UCF press conference via video link from Missouri Friday, Cartwright made it clear that he was heavily recruited by UCF, and that UCF officials convinced him to become a candidate against his initial reluctance.

Ultimately, the committee and the UCF Board of Trustees selected him over the only other remaining finalist, Dr. Cato Laurencin from the University of Connecticut.

“Our selection ultimately came down to the best fit for UCF,” Seay said.

Cartwright’s selection must be confirmed by the Florida State University System Board of Governors, which is expected to take it up next Wednesday.

Cartwright has been the top executive at Missouri for less than three years, and before that he was the top academic officer, provost, for the State University of New York system.

“I’m excited to be where we are,” Cartwright said Friday in a video hookup from Missouri.

Yet he arrives at a time of major crisis. The coronavirus pandemic has forced UCF and all other Florida state universities to shut down their campuses and go to distance learning for all classes for the foreseeable future.

“There are going to be a lot of challenges. I would be remiss if I didn’t talk about the challenge we have right now, the pandemic. … We’re going to have to be making some very difficult decisions in the near future on how we are going to manage that,” Cartwright said.

He might have been seen as a top fit at UCF because he helped the University of Missouri recover from scandal that had cost the school public support.

He had arrived at Missouri when that school was in a political and public relations crisis charged with allegations of racism. That scandal led to massive student protests and ultimately the resignation of Missouri’s previous chancellor, leading to Cartwright’s hiring.

Cartwright now arrives at UCF as it is trying to move past a nearly $100 million spending scandal from 2018 and previous years.

“The experience is making sure we recognize how difficult it is when people go through challenging times. There were a lot of people under duress. There were people who were hurt. They knew that this institution had went through a dramatic experience. And we need to think about how do we build back the community feeling so that people want and to continue to feel proud about Mizzou to be proud about being a Tiger,” he said. “And certainly, telling the story about what it means to be at Mizzou.”

He said the same may apply at UCF.

“We need to establish why the institution is great and to get the message out … so that the world knows how great UCF is,” he added.

He comes to UCF with a compelling personal story, having been born in The Bahamas and relocated to the United States with his mother, where he earned a GED and attended community college in Iowa while working at a restaurant and cleaning hog pens to help pay for classes. Eventually he earned a doctorate in electrical engineering from the University of Iowa, and rose through the ranks of academia.

Cartwright now is an internationally-recognized researcher and scholar in the area of optical sensors, an area of major research and academics at the University of Central Florida. He is a fellow of the American Association for the Advancement of Science.

UCF has been under Seymour’s leadership since  Whittaker resigned in February 2019 amid investigations into a university spending scandal. Whittaker served just eight months and resigned largely because of controversies that had dated to the tenure of his predecessor, President John Hitt, who had served for 26 years before retiring in 2018.

Seymour took himself out of the running for the permanent presidency.