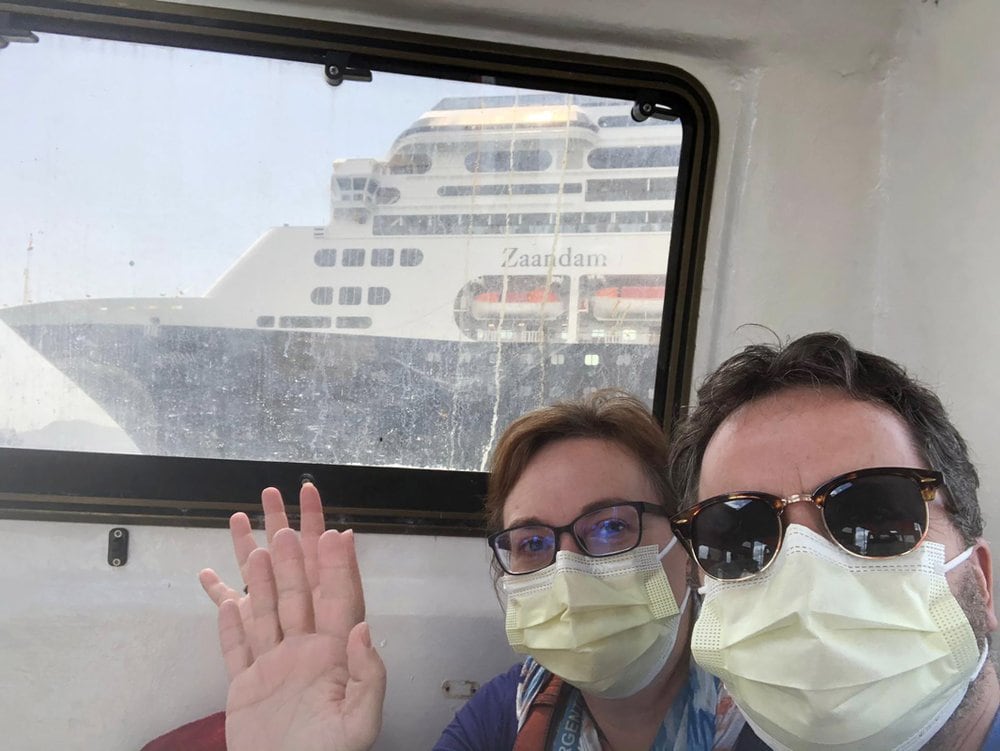 A number of Americans remain on board.

As a cruise ship stranded at sea with dozens sick and four dead makes for Florida, passengers who have been confined to their rooms for more than a week are anxious for relief, hoping Gov. Ron DeSantis will change his mind and allow them to disembark despite confirmed coronavirus cases aboard.

Orlando technical writer Laura Gabaroni and her husband, Juan Huergo, have wanted to explore the southernmost tip of South America for years — to see the penguins on the Falkland Islands and the glacial landscapes of the Strait of Magellan. But their vacation turned harrowing as countries shunned them and people fell ill.

“It’s been a trying time, especially because of the many ups and downs we’ve seen along the way,” Gabaroni said. “We are unable to leave our rooms, haven’t had fresh air in days.”

Hundreds of passengers and crew members from the Zaandam have not stepped on dry land for 15 days as the novel coronavirus prompted authorities around the world to seal borders, implement checkpoints and force people into quarantines. Passengers were asked to keep their rooms dark and leave their drapes closed when they passed through the Panama Canal on Sunday night after days of wrangling with local authorities.

The Zaandam’s plans to dock as early as Wednesday in Florida are still up in the air but have already been rebuked by local officials and DeSantis, who says health care resources are stretched too thin. The governor said he has been in contact with the Coast Guard and the White House about diverting the ship.

Broward County officials will meet Tuesday to decide whether to let the ship dock at its Port Everglades cruise ship terminal, where workers who greet passengers were among Florida’s first confirmed coronavirus cases.

Dozens on board the Holland America Line ship have reported flu-like symptoms and four people have died, with at least two of the deaths blamed on the coronavirus by Panamanian authorities. The company said eight others have tested positive for COVID-19 but 2,300 passengers and crew members are in good health.

Gabaroni and hundreds of others who were fever free and not showing any symptoms were transferred to a sister ship, the Rotterdam, sent last week with supplies and staff to replenish the stranded boat.

The Zaandam was originally scheduled to travel on March 7 from Buenos Aires to San Antonio, Chile, and then depart on March 21 for a 20-day cruise to arrive in Fort Lauderdale in early April. But beginning March 15, the Zandaam was denied entry by South American ports, even before passengers reported their first flu-like symptoms on March 22. The ship approached the coast of Panama last week and negotiated permission to cross the famous canal to the Atlantic Ocean on its way to Florida.

Canal administrator Ricaurte Vásquez said the country is not allowing any vessels with positive coronavirus cases through but made an exception for the ships.

“That case (the Zaandam) was simply for humanitarian reasons,” Vásquez said.

Passenger Emily Spindler Brazell, of Tappahannock, Virginia, said the company has been accommodating, offering passengers extravagant meals, wine and unlimited phone calls. At the same time, it has been clear they have to stay in their rooms and not have any contact with crew members.

“The captain said something like, ‘This is not a trip anymore. This is not a cruise. This is a humanitarian mission,’” said Brazell, who was transferred to the Rotterdam on Saturday.

The Rotterdam now has nearly 800 guests and more than 600 crew members. Holland America said 450 guests and 602 crew members are left on the Zaandam, with more than 190 reported influenza-like illness symptoms. More than 300 U.S. citizens are on both ships combined.

Holland America President Orlando Ashford penned an opinion column in the South Florida Sun Sentinel to plead with officials and residents to let the passengers disembark.

“Already four guests have passed away and I fear other lives are at risk,” Ashford wrote. “The COVID-19 situation is one of the most urgent tests of our common humanity. To slam the door in the face of these people betrays our deepest human values.”

Passenger Gabaroni, 48, says she hopes her elected officials do the right thing. Gabaroni wrote a letter to DeSantis imploring him to let the two ships dock in Florida.

“Florida continues to receive flights from New York, and it allowed spring break gatherings to go on as planned. Why turn their backs on us?” Gabaroni said.