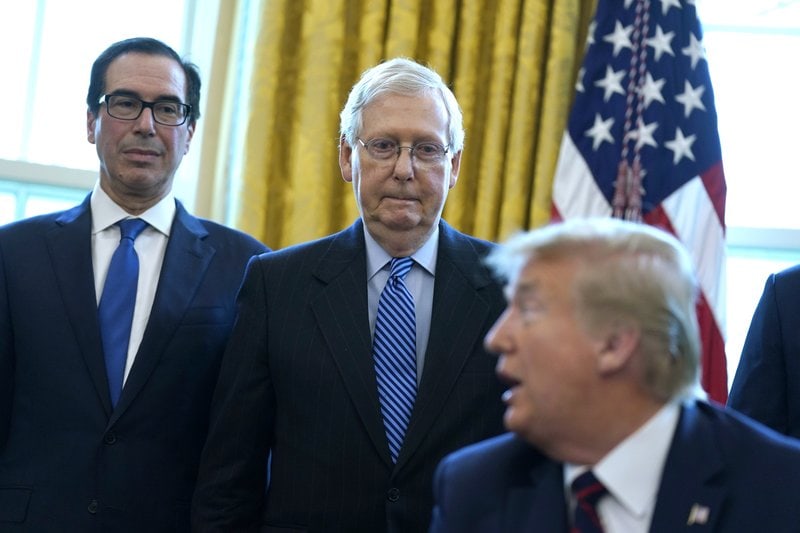 The argument breaks sharply with assurances that the Trump administration made early on about the virus.

President Donald Trump’s impeachment trial distracted the federal government from the coronavirus as it reached the United States in January, Senate Majority Leader Mitch McConnell said Tuesday, despite warnings at the time from public health experts and members of Congress about the spread of the deadly virus.

The outbreak “came up while we were tied down on the impeachment trial. And I think it diverted the attention of the government, because everything every day was all about impeachment,″ McConnell told conservative radio host Hugh Hewitt.

The Trump administration has been severely criticized for its slow response to the pandemic, especially for the shortage of coronavirus testing kits when the infection first spread to the U.S. from China. Trump initially downplayed the virus, comparing it to the seasonal flu and declaring it may go away on its own. The administration also has been criticized for not supplying needed protective medical gear for health care workers.

McConnell’s argument breaks sharply with assurances that the Trump administration made early on about the virus. Health and Human Services Secretary Alex Azar, who declared a public health emergency Jan. 31, said at the time that the public “can be assured the full weight of the U.S. government is working to safeguard the health and safety of the American people.”

And weeks after his Feb. 5 acquittal in the impeachment trial, Trump continued to minimize fears as he insisted the U.S. was “very, very ready” for whatever the outbreak brings. On Feb. 25, he told business leaders in India: “I think that’s a problem that’s going to go away.”

As the pandemic has worsened in recent weeks, Trump has ramped up the federal response. He announced Sunday that he is extending social distancing guidelines through April 30 at least, backing away from an earlier call to have the country “opened up and raring to go” by Easter, April 12.

McConnell said Republican U.S. Sen. Tom Cotton of Arkansas was among the first in Congress to raise an alarm. Cotton, an outspoken critic of China’s communist government, has said he does not trust China to act truthfully about the virus.

“He was first, and I think Tom was right on the mark,″ said McConnell, a Kentucky Republican. “Tom figured this out early, and he was absolutely right.”

Cotton, in a separate interview with Hewitt on Tuesday, said he had been studying the virus since mid-January. “Unfortunately, Washington, especially the Congress, was consumed with another matter … the partisan impeachment of the President,″ he said.

“I was focused at the time on what I thought was going to be a growing crisis coming out of Wuhan. And, unfortunately, it’s been proven correct,″ Cotton said. The virus originated in the Chinese city of Wuhan.

The U.S. death toll from the coronavirus has climbed past 3,500, eclipsing China’s official count.

The Trump administration briefed the Senate on Jan. 24 — during the impeachment trial — and again on Feb. 5, the day Trump was acquitted.

Still, the threat posed by the virus was not widely understood, and some lawmakers complained that Trump wasn’t taking the growing threat seriously. For weeks after the first U.S. case of the coronavirus was confirmed in January, government missteps caused a shortage of reliable laboratory tests for the coronavirus, leading to delays in diagnoses.

Republican and Democratic leaders of the Senate health and foreign relations committees issued a joint statement after the Jan. 24 briefing, declaring, “We are monitoring the outbreak of a novel coronavirus closely and are in close communication with United States government agencies on actions and precautions needed to prevent further spread of this virus.”

The statement said China “has taken steps to share information with international health experts″ and thanked administration officials for providing an update.

Azar, in declaring the public health emergency for the entire U.S. on Jan. 31, said: “While this virus poses a serious public health threat, the risk to the American public remains low at this time, and we are working to keep this risk low.”

That same day, Trump imposed travel restrictions on China in response to the outbreak. Most major airlines had already suspended flights to China, following the lead of several major international carriers. An earlier State Department advisory told Americans not to travel to China because of the outbreak.

Despite those actions, the administration — and Trump himself — downplayed the virus for weeks before taking more drastic steps this month. Trump speculated last week that the country could reopen by Easter, but now says distancing guidelines should remain in place through April.

Cotton called Trump’s decision to impose travel restrictions on China “probably the single most important thing the U.S. government has done over the last two months.″

But U.S. Sen. Chris Murphy, a Connecticut Democrat, said Trump has been slow to respond from the start. “Just left the Administration briefing on Coronavirus. Bottom line: they aren’t taking this seriously enough,” he tweeted Feb. 5.

His opinion remains unchanged. “Unfortunately, the Trump administration has completely botched the response to COVID-19 so far,″ Murphy wrote Tuesday in Foreign Policy magazine. Trump ”denied the risk of the disease for weeks, failed to ramp up testing measures … and Americans are paying the price for it. The next virus is not going to wait for the U.S. government to get its act together.”

The virus has caused a global pandemic that has sickened about 800,000 people and killed tens of thousands, according to figures compiled by Johns Hopkins University. For most people, the coronavirus causes mild or moderate symptoms such as fever and cough that clear up in two to three weeks. For some, especially older adults and those with existing health problems, it can cause more severe illness or death.

nextLast Call for 3.31.20 — A prime-time read of what's going down in Florida politics