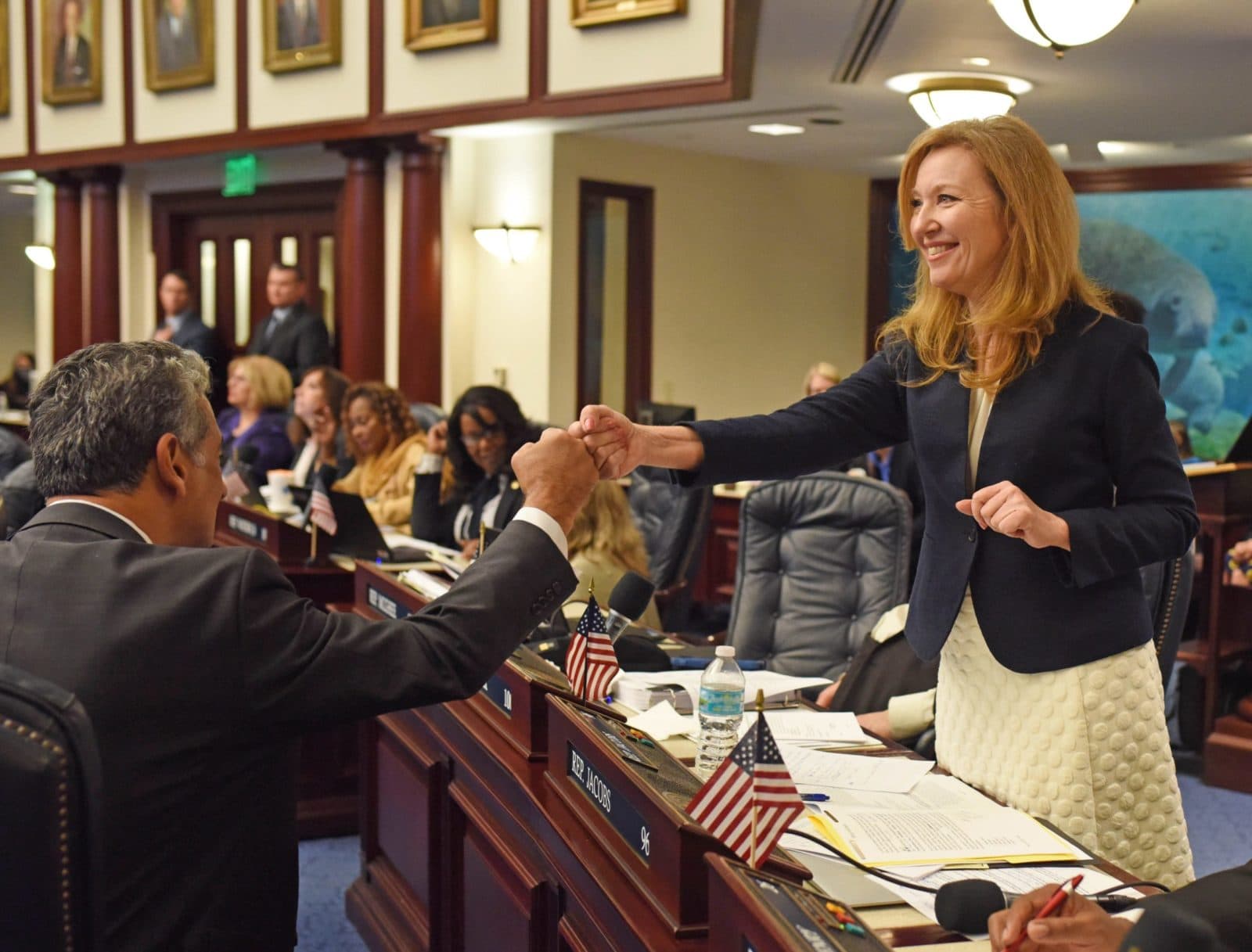 A new mural will celebrate the life and work of Kristin Jacobs.

Kristin Jacobs found inspiration in Florida’s springs, lakes and oceans. Her arrival in the state marked a turning point, a way out of an abusive marriage and the start of a new life. Fortunately for Floridians, she never left, becoming one of the state’s most prominent environmental advocates, testifying before Congress and the U.S. Senate about clean water and climate change, then serving on a task force at the request of President Barack Obama.

She remained active in civic groups even after being elected to the Florida House of Representatives in 2014, winning reelection in 2016 and 2018. Rep. Jacobs, who drank deeply of the natural beauty she fought to protect, whether racing through open pine forests on a trail bike or creating a regional system of collaboration to reduce climate change, died early Saturday morning, of cancer. She was 60.

Of her many accomplishments, her proudest might be spearheading the development of the Southeast Florida Regional Climate Compact, a four-county initiative built in 2009 on local governments working together.

“It’s become a model not just for the country, but for the world,” Obama said of the bipartisan group five years later.

“But to hear Kristin tell it, it was partly about protecting an area of the state she loved dearly,” said Steve Vancore, 59, her romantic partner. “But part of it was also for the people who put others first, who came together for a common cause and who set aside political, partisan, regional and personality differences to go out and put good things into the world. That was, to some extent, her legacy.”

Jacobs, a Democrat, was a Broward County commissioner when that county joined with Palm Beach, Monroe and Miami-Dade counties in preparing for (and responding to) sea-level rise, flooding, and economic and social disruptions. The website also includes graphs and charts of carbon dioxide emissions; saltwater intrusion into groundwater; and measurements of heat, drought and rainfall.

Agreeing to act as a region removes the temptation for developers or local governments to break ranks. “What would happen,” Vancore said, “is that Margate would say, ‘Oh, Pembroke Pines doesn’t have this (environmental safeguard), so we don’t want to have it.’ Everybody would be racing to the bottom to see who could get a cheaper build.”

She could argue fiercely while being willing to compromise, knowing that all agreements are fragile.

“It’s about incremental progress,” Jacobs recently told a newspaper. “Then you pray there’s somebody running after you’re done who will move that ball forward.”

Jacobs grew up in San Diego near the Mexican border and was fond of that cuisine, spicing up her own recipes with crushed red pepper. She drew on that same spirit to overcome challenges, including a spinal condition that led doctors to insert a steel rod, which led her to spend her senior year of high school in a full-body cast.

She married shortly after graduating from high school and frequently moved with her husband’s jobs. The husband physically assaulted her on multiple occasions, Vancore said, and it took years to get out from under the shadow of abuse.

One of those jobs took the family to Florida. She made her break, going to Women in Distress, a domestic violence shelter, and taking her two children with her. The program gave her the time and space she needed, including an apartment with the first month’s rent waived, plus 90 days of free day care.

That was all she needed. She joined neighborhood meetings, where she learned that the county was planning to close a popular park. Before long, she was fully engaged in neighborhood work, organizing residents in unincorporated Broward County. She got married, happily this time, to Stu Jacobs.

In the late 1990s, she saw a County Commission that, in her view, was too close to developers. She ran for a seat in 1998, pointing to recently approved houses that threatened the Everglades, ousting the incumbent in the primary with 54% of the vote. She won the seat in the general election with nearly two-thirds the vote. Voters returned her to office by successively wider margins in 2002 and 2006; in the middle of which, her colleagues voted for a one-year term as Broward County’s Mayor. Jacobs ran unopposed in 2010.

Her environmental work drew increasing notoriety, leading to her testimony in 2008 before the U.S. House of Representatives for the Clean Water Act, and before the Senate in 2013 on climate change. The same year, the White House asked her to be recognized by President Obama in an address to Georgetown University and serve on the National Climate Preparedness and Resilience Task Force.

“It never didn’t blow her mind,” Vancore said. “She so admired Obama because he came from relatively humble beginnings as well.”

In 2012 she ran for the U.S. House, losing in the primary State Rep. Lois Frankel. She returned in 2014 to join the Florida House, winning the primary in a landslide and running unopposed in the general.

Power players courted her, seeing star quality. “The moment she won the state House, everybody wanted her to run for the state Senate,” said Vancore, a Tallahassee public relations executive. “We’re talking significant people. She was, like, ‘No, I just got elected to the House. I’m going to see what happens.’”

Their relationship deepened through cycling, as part of a group of friends hit the trails in the parks in and around Tallahassee. One ride stands out. The buddies were riding their mountain bikes over the Munson Hills Trail, a popular loop in the Apalachicola National Forest. A narrow red clay path cuts through open pines, with hookups with other trails if you want to explore. It gets hilly in places too, and that fast surface turns to mushy sand in places.

“One by one, everybody’s like, ‘Hey, I’ve gotta get going,’” finishing the loop by the asphalt path that presented itself.

“Finally, it was her and me, and I said, ‘Let’s take this straight trail back.’ And it was like you told your kid it was time to go home from Disney World.”

They took the trail back, sweating for an extra 40 minutes. Sometimes he rode after work with Jacobs, who was by then amicably divorced. If they were both traveling, they met in parks around the state.

“We fell in love on our bikes, there’s no two ways about it,” Vancore said.

At some point, loved ones will celebrate her life at Lake Kissimmee State Park, Jacobs’ favorite. With 13 miles of trails around three lakes, a rider can share space with bobcats and white-tailed deer, bald eagles and scrub jays, turkeys and alligators and wild hogs. They plan to let her cremated remains flow into the headwaters of the Everglades, a unique wetland she sought to protect from oil and farming and fracking.

Rep. Kristin Jacobs is survived by her sons, Richard Hames and Mitchell Jacobs (and his girlfriend, Kate Slavensky); a daughter, Lauren Donaldson and her husband, Chris; grandchildren Tyler, Mirabelle and Kelsey; ex-husband and best friend, Jacobs; boyfriend Vancore; and numerous friends and admirers.

Andrew Meacham is a writer living in St. Petersburg. He worked for the Tampa Bay Times for 14 years, retiring in December 2018 as a performing arts critic. You can contact Andrew at ameacham437@gmail.com.