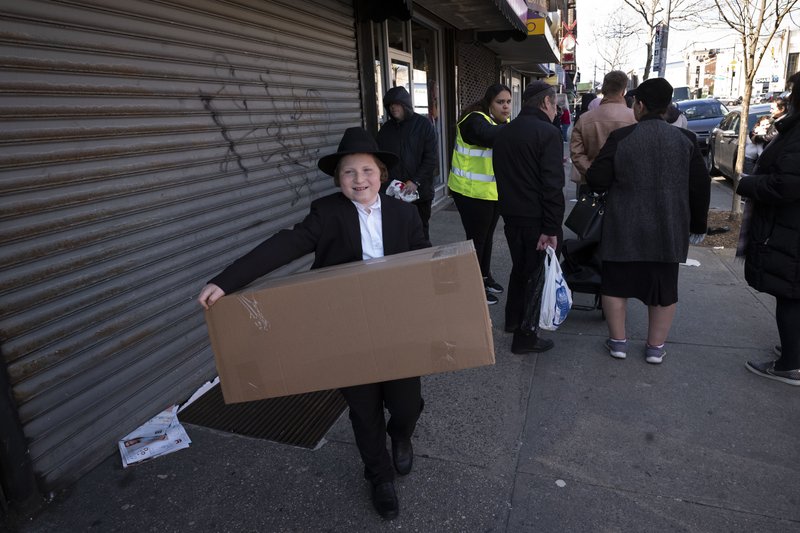 Passover and its epic story — how the Jewish people escaped to freedom after plagues struck their oppressors — are uniquely resonant this year, as Jews find ways to honor the holiday amid the outbreak of what feels like a real-life plague.

The coronavirus has forced Jewish families to limit the celebratory Passover meals known as seders from extended families and friends to small, one-household affairs.

But the pandemic hasn’t cut the connection that Jews from all backgrounds feel to one of their calendar’s most important holidays – and, for many, the global crisis has deepened its meaning.

Rabbi Noam Marans, director of interreligious relations at the American Jewish Committee, described the gravity of Passover during the coronavirus by reciting a key portion of the Haggadah, the sacred text Jews use on the holiday.

‘This year we are enslaved – next year we will be free.’ That aspiration is very real this year,” Marans said, looking ahead to a future victory over the disease.

As the all-are-welcome spirit of seders is constrained by public health rules set up to help stop the virus, more liberal Jewish communities are embracing digital connections with socially distant family and friends.

Jews in all branches of the faith are also taking the opportunity to ensure those in high-risk populations have enough of the food, including the unleavened bread known as matzo, which represents their ancestors’ exodus from bondage in Egypt.

The Chabad-Lubavitch movement of Hasidism has expanded its annual distribution of “seder-to-go” kits, which had typically been prepared for hospitalized or otherwise housebound Jews, to help serve families and individuals confined to their homes during a quarantine. Chabad projects it will distribute 250,000 seder kits throughout North America.

Rabbi Zalman Shmotkin, spokesman for Chabad-Lubavitch, said that he has started speaking to his children about the deeper and historical meaning of the seder to help them understand why this year’s dinner will look and feel so different. Part of the spirit of Passover, Shmotkin said, involves recognizing obstacles but managing “to supersede that and break out, find a way to see godliness in it.”

Steve Weinstein, 62, is preparing for a seder for two this year — just Weinstein and his wife, without the extended family they typically host in Milwaukee.

“It’s very sad not to have everybody together,” Weinstein said.

Although he’s only started to think about the broader message of this more somber Passover, Weinstein said, “we’ll find ways to be able to equate” the holiday’s biblical narrative with the outbreak. The virus could be viewed in one sense, he said, as the oppressive rule that Jews eventually overcame.

Passover’s power to bring Jews both observant and secular to the seder table is unparalleled among holidays on the faith’s calendar, according to 2013 polling by the nonpartisan Pew Research Center. Seven in 10 Jews reported participating in a seder the previous year, compared with 53% who reported fasting during Yom Kippur, the holy Jewish day of atonement.

With the coronavirus shaking up Passover tradition, different branches of the faith are offering their own seder guidance. For those permitted and planning to use Zoom, FaceTime or other digital platforms for a virtual seder, the Union of Reform Judaism created a guide for creative ways to get online guests involved.

For Orthodox Jews, the six leading organizations that made a unique joint plea last month for worshippers to curb outside interactions during the pandemic released further united guidance on Passover last month.

That Orthodox guidance asks that observers only purchase “the truly ESSENTIAL” Passover items and includes a narrow exemption for households to welcome any seder guests: Outsiders must be alone or “absolutely unable to prepare” for the holiday, must undergo a two-week quarantine in advance, must maintain social distancing, and must display no symptoms of the virus alongside their hosts.

In Israel, Passover is similarly constrained amid the spread of the virus. Prime Minister Benjamin Netanyahu entered self-quarantine this week after an aide tested positive for COVID-19 and echoed his government’s entreaties that people forego family visits during the pandemic.

International Fellowship of Christians and Jews President Yael Eckstein, who lives in the north of Israel, is preparing for her group to help direct an estimated 75,000 Passover food boxes and 130,000 boxes of matzo to elderly and needy households. Eckstein is also grappling with whether she can safely host a family member who would otherwise be alone for the holiday.

Despite the challenges of Passover during coronavirus, Eckstein said she’s taking comfort in what she sees as Passover’s message, “that good comes from bad situations. And we have to just do the best we can within the sad situation, but also realize we don’t have to be consumed by it.”

previousAIF, Space Florida and FloridaMakes team up to connect manufacturers with businesses