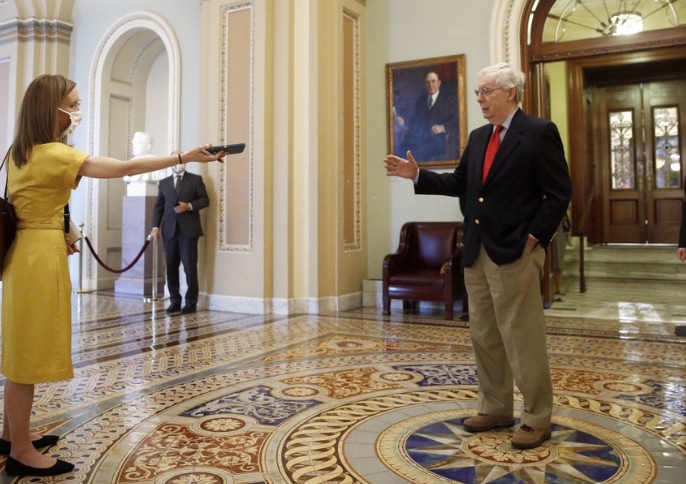 Senators torpedoed quick passage of a new coronavirus aid package Thursday, with Democrats rejecting a Trump administration request for $250 billion to boost a small business payroll fund and Republicans refusing Democrats’ demand for another $250 billion for hospitals and states.

The standoff doesn’t end the pursuit of more rescue funds.

Democrats and Republicans agree the aid is urgently needed and talks continue. But it reinforces that Congress and the White House will need to find bipartisan agreement.

“Nobody thinks this will be the Senate’s last word on COVID-19,” said Senate Majority Leader Mitch McConnell. “Let’s continue to work together, with speed and bipartisanship. We will get through this crisis together.”

House Speaker Nancy Pelosi declared the Senate vote merely a “stunt” as the country faces an “epic” crisis. She ridiculed the administration for trying to jam a $250 billion request through Congress with 48 hours notice with little data to back it up.

“Really?” Pelosi said on a conference call with reporters.

The stall comes as communities across the nation strain to meet health care needs and salvage local economies pummeled by the crisis. A new jobless report shows a whopping 16.8 million Americans are now out of work.

The massive infusions of federal cash — the $250 billion sought by the administration would come on top of combined legislation already totaling about $2.5 trillion — are intended as a patch to help the $21 trillion U.S. economy through the current recession, which is causing an economic contraction and a spike in joblessness that is overwhelming many state systems for delivering unemployment benefits.

With Congress all but shuttered — and unlikely to return April 20, as planned — lawmakers pledged to keep negotiating with the White House.

In the brief Senate session, Democrats rejected Trump’s request for $250 billion to supplement a “paycheck protection” program for businesses.

McConnell and Treasury Secretary Steven Mnuchin say the program, which involves direct subsidies to companies to keep employees on payroll and pay company rent, is on track to quickly deplete its first $350 billion infusion as businesses rush to apply for the aid.

Democrats are not opposed to boosting the payroll fund, but they want to ensure that the popular program delivers benefits to businesses in minority communities that are often under-served by traditional lenders.

Democratic Sen. Chris Van Hollen, D-Md., accused McConnell of trying to ram through legislation and detailed a variety of glitches in the program, including fears that many big lenders are not serving minority neighborhoods.