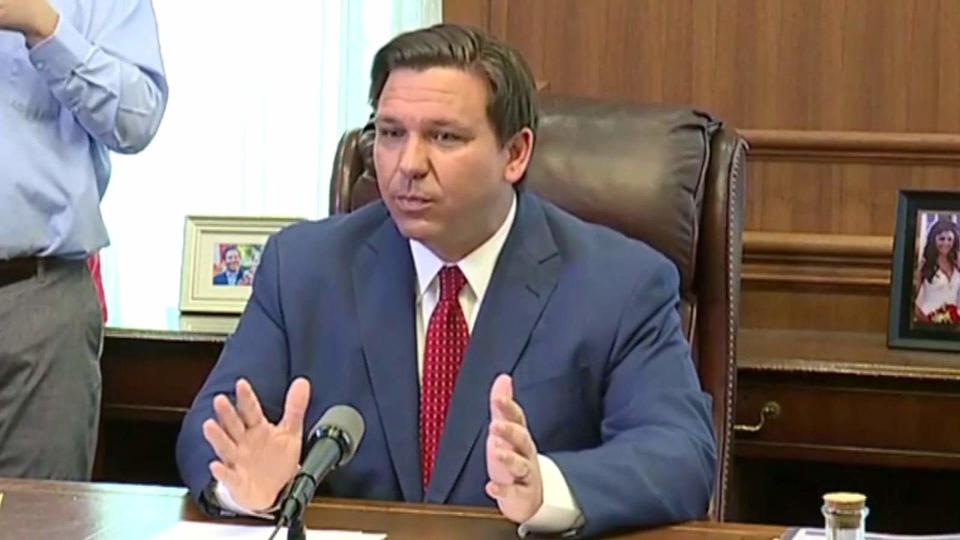 DeSantis announced a coalition with southern states, but only those with Republican governors.

“Florida’s flattened the curve,” DeSantis said. The messaging has now become how to get the state moving again.

DeSantis said Florida is participating in a regional coalition of states to coordinate reopening, though it is uncertain if the other states will have tangible impacts on Florida’s path forward.

“We’ve had [a] meeting with all the Southeastern governors … Mississippi, Alabama, Georgia, Florida, South Carolina, and Tennessee,” DeSantis said. “And we shared a lot of ideas.”

With North Carolina exempted, one might quibble with the definition of Southeastern. However, DeSantis noted that Florida will have to chart its own course.

“I think we’ll be on the same page with some stuff,” DeSantis added, but “Florida’s about five states in and of itself.”

The Governor’s spokesperson played up the regional cooperation in a tweet that used some of the same language from the segment.

.@GovRonDeSantis on @foxandfriends: Florida is working in coalition with regional southeastern state governors, TN, MS, SC, GA, AL to safely re-open as well as working regionally within Florida to make sure we thread the needle properly.

DeSantis noted the preponderance of hospitalizations in Southeast Florida, comparing that to Northeast Florida, where coronavirus never hit those levels.

“This has impacted the state differently,” the Governor said. “And I think how you approach it doesn’t have to be uniform in every jurisdiction in Florida.”

The Governor otherwise used the appearance to play to the base, both at home afar, in a way familiar to those who covered the 2018 campaign.

The Governor gave “credit to the people of Florida,” noting that the “Acela media” said “Florida’s going to be worse than New York.”

“It was constant, people saying that,” DeSantis said. “If you look at what’s happened, it’s not true. New York has about 25 times the fatalities of Florida, even though we have two million more people.”

“You can do both. You can fight COVID-19,” DeSantis said, “and get people back to work so society can function again.”

The goal, he said, is to connect with labs that can handle rapid test processing within 24 hours, especially given the federal reimbursement has doubled to $100 per test.

Point of care Abbott tests are envisioned not only for hospitals, but nursing homes, which along with prisons (unmentioned in the seven-minute block here) are hotspots of community spread.

Antibody tests, such as those used in California, are also going to be implemented in the near future.

The Governor also addressed the task force to reopen the economy, launched Monday and expected to produce a report by Friday.

“We have a great task force with people from all over the state of Florida and all the different industries, particularly small business. And we’re putting together a lot of great ideas for what the next phase looks like,” DeSantis said.

“It’s amazing the ideas the businesses have been thinking about for weeks and weeks,” DeSantis said.

“Places like Disney,” represented on the task force, “are so far ahead of the curve.”

“A lot of the businesses are going to go above and beyond,” DeSantis said, to reassure balky consumers.

For those who wondered, Fox and Friends did not ask about the exclusion of Agriculture Commissioner Nikki Fried from the task force, an omission that irked Fried and Florida Democrats.