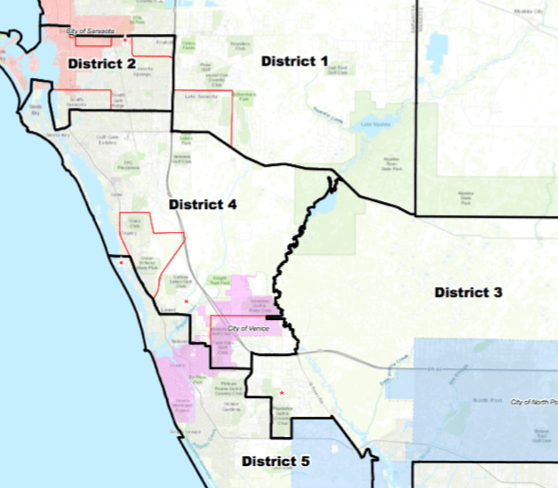 A judge has ruled against plaintiffs in a lawsuit, finding that new Sarasota County Commission districts will stand.

The plaintiffs argued Sarasota redrew lines ahead of the 2020 county elections, the first since Sarasota County voters approved single-member voting, to disenfranchise the African American community of Newtown in District 1, where Republican County Commissioner Mike Moran is up for reelection this year. The community was shifted into District 2, where Republican County Commissioner Christian Ziegler faces reelection in 2022.

Atkins, the first black mayor for the City of Sarasota, filed to challenge Moran after losing a county-wide race against him in 2016. But Atkins no longer resides in that district, and would likely face a tougher path to victory even if he moved, as the Newtown community that once served as the heart of his Sarasota City Commission district is no longer included.

The case against the county largely centered on the decision to redraw county lines ahead of the 2020 Census, an unusual move even sitting commissioners acknowledged was in response to passage of single-member districts. County Commissioners argued the change in voting meant district populations needed to be balanced. Ziegler, whose district became more Democratic under the new map, cast the lone dissenting vote against redistricting.

But after hiring a consultant to draw several options for districts, county commissioners ultimately asked the consultant to instead draw a map based on an anonymous submission created by former Republican Party of Sarasota Chairman Bob Waechter.

In a deposition, Waechter said he did not use census data but voter registration to redraw maps, but could not provide much on his personal process as he had wiped and destroyed a hard drive in his computer.

“The math issues cited by Plaintiffs have very little or nothing to do with the Newtown area and the District 2 border moving east to encompass it,” Jung writes. “Critique of the math, as shown by the lay expert… does not bear on the sole question here: Is there real, triable, admissible proof to contest that the dominant intent was race?”

Hugh Culverhouse, the attorney for plaintiffs, said there is no point in appealing the summary judgment because an appeal could not stop the elections taking place this year under the new district lines.

Atkins said he’s not surprised by the ruling even though he was hopeful about the case.

“It’s definitely not a shock because the system is already stacked,” he said.  “They have systematically ruled in favor of disenfranchising voters under these kinds of Republican regimes for so long. But we had to let them know we didn’t think they were right, even though they do what they want to do.”

He acknowledged rumors he was considering a run for the Florida Legislature if he lost the case, but said he has made no decision on that front. “I’m going to live my life,” he said.

Bardos had already had two prior claims dismissed suggesting the process violated the Florida Constitution and the federal Voting Rights Act. Bardos previously defended the Florida Senate regarding 2012 redistricting, notably a process that took place while now-Sarasota County Commissioner Nancy Detert served in the Senate.

Order on Summary Judgment by Janelle Taylor on Scribd