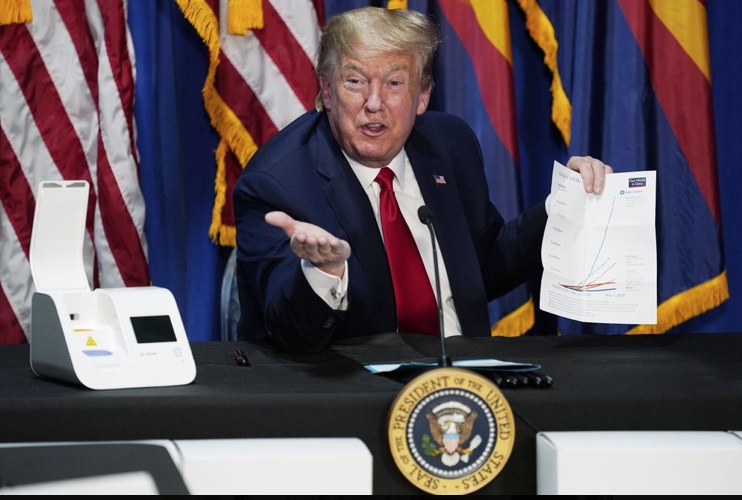 A day after saying task force would be replaced, Trump tweets it “will continue on indefinitely.”

One day after saying that the COVID-19 task force would be winding down, President Donald Trump said Wednesday that it would continue indefinitely, but focus more on rebooting the economy.

Trump tweeted that the panel’s focus would be on “SAFETY & OPENING UP OUR COUNTRY AGAIN.”

Trump’s reversal comes as deaths and infections rates outside of New York, the epicenter of the coronavirus, are rising even as states move to lift their lockdowns.

A White House official acknowledged Wednesday morning that signaling that the task force was preparing to shut down sent the wrong message and created a media maelstrom. The official, speaking on the condition of anonymity to discuss internal thinking, said the membership in the task force group would change as the nature of the crisis evolves.

On Tuesday, Trump had praised the task force for doing a great job, but said “we’re now looking at a little bit of a different form, and that form is safety and opening. And we’ll — we’ll have a different group probably set up for that.”

His tweet on Wednesday said “the Task Force will continue on indefinitely.” He added that the White House “may add or subtract people to it, as appropriate. The Task Force will also be very focused on Vaccines & Therapeutics.”

Trump made himself Exhibit A for reopening the country with his Tuesday visit to an Arizona face mask factory, using the trip to demonstrate his determination to see an easing of stay-at-home orders even as the coronavirus remains a dire threat. Trump did not wear a mask despite guidelines saying they should be worn inside the factory at all times.

“The people of our country should think of themselves as warriors. We have to open,” Trump declared Tuesday as he left Washington on a trip that was more about the journey than the destination.

In Arizona, Trump acknowledged the human cost of returning to normalcy.