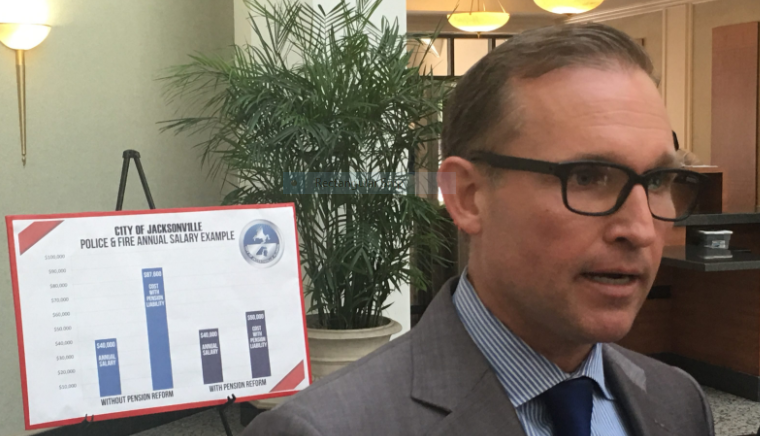 Action News Jax reported Wednesday on potential workforce attrition and reductions in service in the city, out $54 million in crisis spending, including $40 million in employee comp time.

“[We could see] immediate and significant impacts of service to the community, which right now more than ever I think we’d argue people need as much as the services as we can provide related to public safety, and garbage and infrastructure, and all the things that we have to do,” Hughes said.

Layoffs are possible, but all expectations are those cuts would not be to public safety.

The city has $187 million in reserves, but given the unprecedented economic devastation, those will be challenged.

Mayor Lenny Curry addressed the CAO’s comments Thursday, saying they were taken out of context from conversations with unions.

Curry noted that “essential employees paid at rate greater than normal salaries,” which is sustainable during short-term crises, like hurricanes, but “not manageable for two months.”

“We’re not having a payroll crisis,” the Mayor added, but “if we don’t plan for this and take this action now, we could end up there.”

For Mayor Curry, who ran in 2015 as an accountant looking to put the city’s fiscal house in order, the coronavirus crash brings things full circle, where he again is having to make tough decisions with scant room for error.

“You will receive a balanced budget; it may not be your priorities,” Curry told City Council in 2015, as he put forth a lean spending plan. New police officers were the spending highlight of the document.

A 90 day audit, released later that year, showed Jacksonville on the fiscal brink if the city did nothing about the unfunded liability on its defined benefit pension obligations.

“Projected annual deficits of more than $30m beginning in FY 17 are not sustainable and would result in the depletion of the General Fund unassigned fund balance by FY 18 or FY 19… Absent additional action, annual pension contributions from General Fund could be greater than $244m in FY 19,” the document asserted, urging the city to secure “revenue streams outside the general fund.”

Armed with that justification and still in what was an extended honeymoon with City Council, Curry’s team moved. They shepherded approval of a sales tax referendum through Tallahassee, with Sen. Rob Bradley and Travis Cummings doing the heavy lifting. Then they got 65% of the vote in August.

Pension reform approval created short-term benefit to budgets, freeing up roughly $150 million and allowing the city to conquer some of its capital backlog in recent years. However, the plan deferred payments until the Better Jacksonville Plan 1/2 cent tax elapses, which could be as late as 2030.

A condition of union support, long-deferred pay raises were implemented for all public sector employees in the next three budgets. Meanwhile, the unfunded liability grows, while waiting for revenue.

Perhaps the biggest political story of Curry’s term is the attempt to sell JEA.

Federal and City Council investigations are underway to figure out who was behind the scheme, including the problematic performance unit plan that would have enriched the utility’s C-Suite should it be sold.

Curry’s administration committed to exploring privatization of traditional public services as early as 2015, so this wasn’t a conceptual surprise.

However, when Curry was arguing in favor of a sale last August, his point was simple.

The city needed the money.

The Mayor noted that $3 billion was the minimum net price the board would accept for sale.

His suggestion for those proceeds was a “lockbox” to make Jacksonville a “debt-free city.” Jacksonville’s $2.2 billion in debt could be paid off, Curry said, which would eliminate $240 million in debt service.

It would also mean the end of the half-cent sales tax going to the Better Jacksonville Plan, which meant that it would be repurposed immediately to pension paydown.

The other $800 million, Curry said, could go into a “lockbox” with an “annuity.”

Those dreams are dead. The attempt to sell JEA was scuttled toward the end of 2019, and even had bids moved forward on the accelerated timeline some in city government wanted, the economic crisis could have scuttled the whole thing.

One argument for a sale, made privately in 2018 and 2019, was that there was a lot of money looking for a place to land, and bids indeed were spirited, before the process was aborted.

Now there is no money looking to land anywhere, and despite the Mayor’s office’s best efforts, COVID-19 shutdowns and a likely slow-walked recovery, mean that most of the big transformative ideas that this administration may have had will be replaced, as they were for Mayors John Peyton and Alvin Brown, with more pressing needs.

Even the one major capital project left for City Council to hash out — the Lot J development of a sports-entertainment complex — is like a quickly-fading memory of an era before social distancing.

While enthusiasm for Lot J could be manufactured, pressure will be intense to allocate increasingly finite funds to more existential needs.

Jacksonville, like most Florida cities, takes a long time to recover from crashes in the housing market. While it’s theoretically possible that property values won’t tank in the current era, previous recessions tell us they will. Expect that to be yet another pressure for a city under plenty going forward.

Regardless of what comes, don’t expect a tax hike.

Curry has said that he wants to ramp up infrastructure spending as a solution to the city’s job crisis. He didn’t back down from that Thursday, which makes the upcoming municipal budget talks the most interesting potentially in years.

previousJacksonville to ease up on outdoor dining restrictions