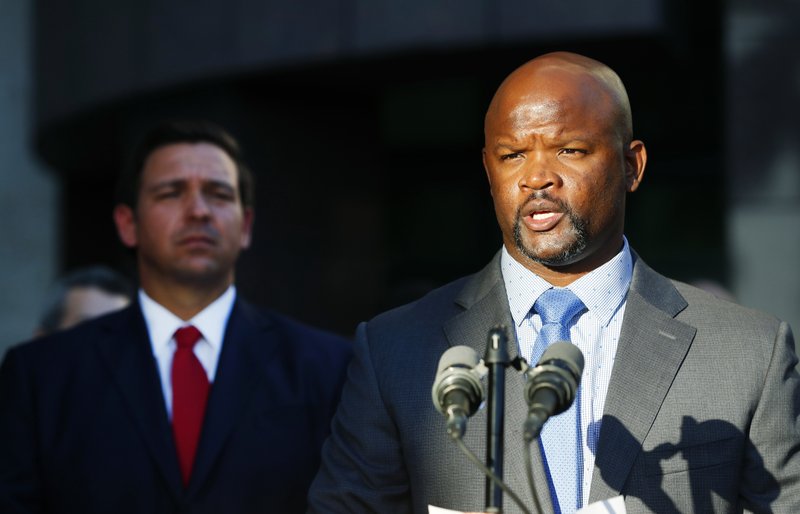 After reports emerged that Broward Sheriff Gregory Tony shot and killed a man at just 14 years old, Tony said he had not disclosed that shooting because he was never arrested.

But a new document obtained by the Miami Herald shows an arrest warrant had been signed following the 1993 shooting in Philadelphia, where Tony grew up.

Gov. Ron DeSantis appointed Tony Broward Sheriff in 2019 without him revealing the shooting.

The “homicide report” the Herald obtained does reinforce Tony’s main reasoning for not disclosing the incident. He was acquitted in juvenile court. Tony was “found not guilty of all charges at trial after testimony by witnesses.”

That outcome led to documents remaining under seal.

“When I was 14 years old, growing up in a neighborhood in Philadelphia filled with violence and gang activity, I shot an armed man in self-defense,” Tony told the Florida Bulldog, the outlet that originally reported the incident after uncovering newspaper reports from that period.

“The juvenile authorities reviewed my actions and cleared my name.”

The acquittal was at least part of Tony’s reasoning for not informing the Governor of the shooting. Tony also did not disclose the incident before taking a previous job with the Coral Springs Police Department. A background check conducted before both hirings also did not uncover any records.

Tony expounded his reasoning in a talk with Florida Politics — his first extensive interview following the Florida Bulldog report.

“I have never disclosed it, because I was never arrested,” Tony explained.

“Under Pennsylvania law, juveniles are not arrested, they go through a petition of delinquency.

That’s unclear, according to the uncovered report.

“The report states that Assistant District Attorney Arlene Fisk initially approved charges of murder and two lesser charges, that an arrest warrant had been signed and issued, and that his bond was set at $15,000,” the Herald notes. “The case was later moved to juvenile court.”

The report also, however, states Tony turned himself in the same day that arrest warrant was issued.

Tony said he shot 18-year-old Hector Rodriguez after Rodriguez chased Tony and his brother inside Tony’s home, though admitted his memory was unclear.

“The day of the incident, Hector, my brother and I were all in front of our house when we got into an argument. At one point, he pulled his gun threatening us, saying he didn’t have any issues with shooting us there,” Tony said.

“I don’t remember the specific details, but I remember how scared I was when he chased me and my brother into our house, I ran to grab my father’s gun and fired it before Hector was able to shoot his gun. Both me and my brother left the house, as we were afraid his friends could retaliate.”

The document, however, states Rodriguez was shot in front of the home multiple times, not inside the house.

Tony’s team focused on the positive, highlighting the document’s confirmation Tony was cleared.

“We are happy to see the release of the police report from the time of the incident,” a statement reads. “There is now absolute confirmation of what we have been saying all along: that Sheriff Tony defended himself and his brother’s life, and that after witness testimony heard by a judge, he was found not guilty.”

Tony has also quarreled with newspaper reports at the time describing he and Rodriguez as “friends.”

“Hector Rodriguez lived in my neighborhood — he lived maybe a block away, but we were not friends,” Tony said.

“He was two or three years older than me. He always carried a gun, dealt drugs, and was involved in gun violence.”

Rodriguez’ then-girlfriend, Maritza Carrasquillo, said the two were friends and also called into question Tony’s assertion that Rodriguez was armed at the time.

“Hector didn’t have a weapon on him that I’m aware of, and I never saw him with a weapon,” she said in the original Florida Bulldog report.

While Tony’s main point stands, the new document raises questions as to whether Tony truthfully filled out documents surrounding his stints at the Coral Springs Police Department and Broward Sheriff’s Office.

Tony checked “no” on applications asking if he’d ever been arrested or detained by police or if he had ever been a suspect in a criminal investigation. When he filled out the FDLE’s Criminal Justice Standards Training Commission’s “affidavit of applicant,” Tony indicated he had never had a criminal record sealed or expunged.

An FDLE spokesperson said they are reviewing that application.

Lisa Douple, a Philadelphia public defender, questioned whether such an incident would need to be reported.

“If I’m found not guilty, why should it affect me the rest of my life?” she told the Herald. “I did something wrong, but it wasn’t criminal.”

Tony has framed the resurfaced information as a political attack as he seeks election to the Broward Sheriff’s job in the 2020 election.

“This incident has never and will never impact my ability to do my job. If anything, I understand better the thousands that fall victim to gun violence each year. My background is what has inspired me to serve the community I love and always fight for justice. I am proud of the work we’ve done and I know we can continue serving the community.”