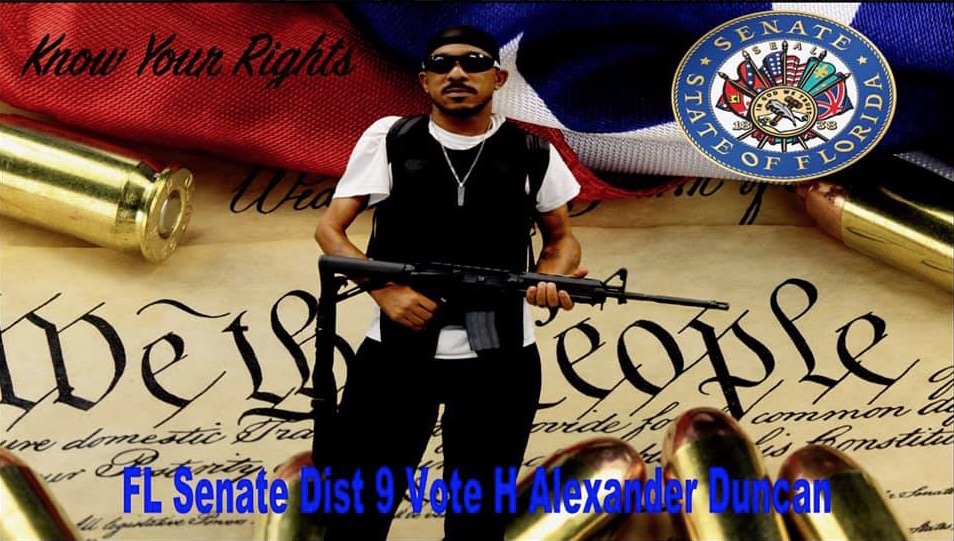 Duncan, running in a crowded Democratic primary in Senate District 9 to represent Seminole County and parts of Volusia County, posted several items on Facebook over the weekend espousing his firm commitment to Second Amendment rights, including a photograph of himself holding his AR-15 rifle, superimposed against the U.S. Constitution and a few rifle cartridges.

His posts also make references to and depict the armed black and Hispanic men who helped escort Michigan black lawmakers past a phalanx of mostly white, armed protesters last week, and to the Black Panthers of the late 1960s. Duncan also posted pictures of African American children in a gun store and holding up a “black power” fist, while he urged African American parents to take their children to the gun store, and to the gun range, and to “give your children a shooting chance.”

“The overt nature of what a lot of these mainly Caucasian groups have been doing with the public displays and their antics with the firearms, they’ve pushed it to the point where… a lot of African Americans are going to take another look …  and see that there is historical significance to African Americans being staunch supporters of the Second Amendment,” Duncan said in an interview Monday.

In his posts, he also makes references to recent acts of violence against black men.

“Just in case any Republicans felt like they had a monopoly on the Second Amendment, Stand Your Ground or “the right to Life, Liberty and the pursuit of Happiness” — you’re wrong… the dying stops now,” Duncan wrote in a post with the picture.

Duncan is vying for the SD 9 nomination, campaigning against fellow Democrats Rick Ashby, Alexis Carter, Guerdy Remy, and Patricia Sigman. The winner will face Republican Jason Brodeur for the open seat in the increasingly purple district.

He said there is a negative narrative about how guns are associated with African American men, and he said the narrative needs to be changed.

His Facebook posts drew a lot of positive response from other African Americans, who agreed Duncan insisted.

“I was driving through Oviedo yesterday, and I couldn’t get out of the city without getting stopped about my posts. I drove through the black community of Johnson Hill, and at least a half-dozen people stopped me to say they were proud. They were watching. And they were very glad that I said something and articulated it in such a good way,” Duncan said.

Whether any of the rest of SD 9 Democrats will feel the same way is yet to be seen. The Democratic primary features three black candidates, Duncan, Carter and Remy, and two white candidates, Ashby and Sigman. State Democratic groups are investing heavily in Sigman.

Duncan, whose political positions include staunch support of the Second Amendment and what he says are conservative fiscal beliefs, believes the party has turned its back on him, even though he previously won a county-wide election (in 2012 to the County Water and Soil Conservation District Board) and performed well against high-profile County Commissioner Brenda Carey in the 2016 election.

Duncan said he grew up around guns and hunting in Geneva, a rural community in northeastern Seminole, and his family has a long history of military and law enforcement service. He has convinced a lot of Democrats with similar backgrounds, particularly African American Democrats, to share his support for gun rights.

“I have body armor … I have stocks of ammo like a Neo-Nazi … I own guns galore … I take my children shooting … I do everything the old black people of Eatonville and Geneva told me and taught me,” Duncan wrote in one of his Facebook posts. “And, not much of it lines up with my party.”

With the apparent rise of racism and violence against African Americans, he argued, they need to support the Second Amendment, in order to arm and defend themselves.

“Honestly, I don’t see me saying a statement like that publicly as being controversial,” Duncan said. “I would think it’s sensible.”