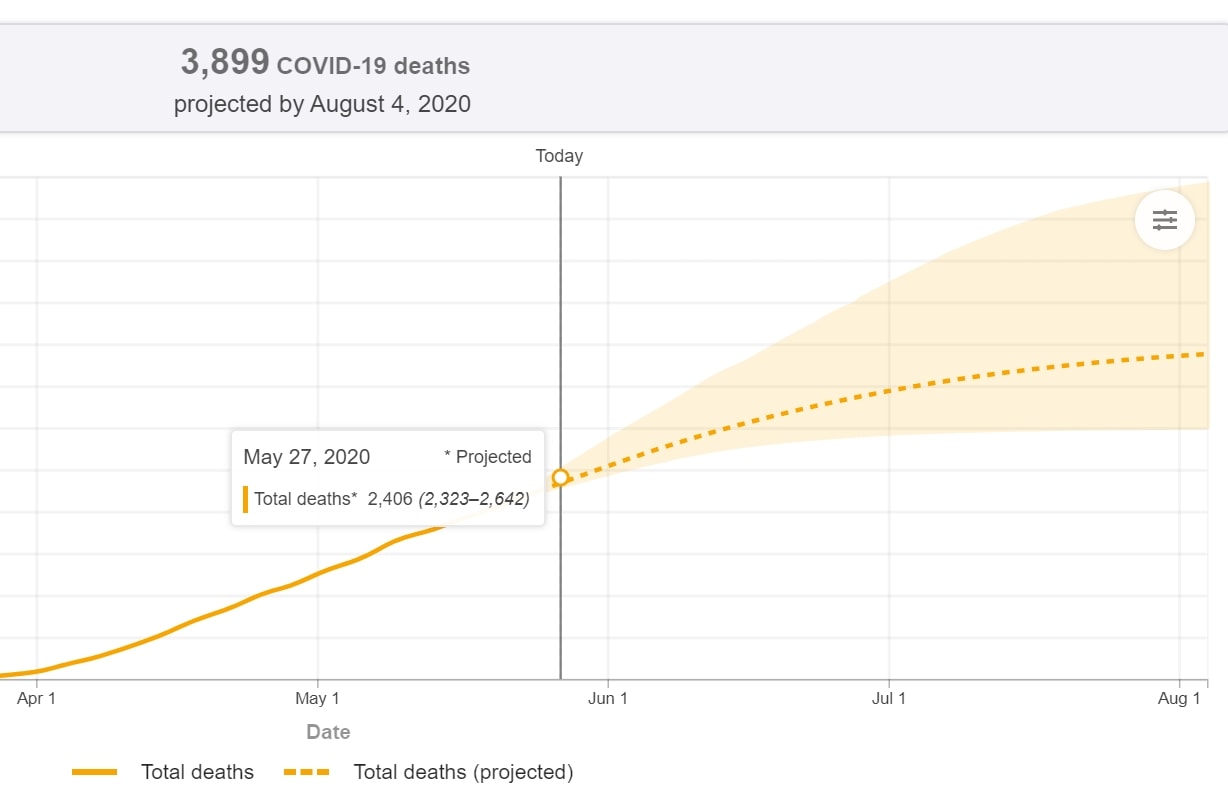 The model again shows Florida past the peak of the novel coronavirus.

Nearly 4,000 Floridians could die of COVID-19 by early August, according to one model referenced by state and federal officials.

The model, produced by the University of Washington-affiliated Institute for Health Metrics and Evaluation (IHME), predicts 3,899 COVID-19 deaths by Aug. 4 as daily deaths decline rather than increase. That’s a revision downward since the model’s methodology was reworked earlier this month, when it showed 5,440 Floridians could die by that date.

But the Tuesday update suggested deaths will dwindle from 45 on Saturday to single digits by August.

Those decreases have come despite the state entering Phase One of its plan to easy coronavirus-related restrictions.

IHME’s model also contains high and low bounds for total and daily deaths. As many as 72 Floridians could die daily in an impending peak or daily deaths could disappear by August. And for Aug. 4, possibilities range from 2,976 total deaths to  5,978.

Hospital bed availability in the state still far exceeds the projected need, which is trending downward. The state has more than 20,000 beds and required around 1,600 beds at the peak need in early May.

The model has been highlighted by members of the White House Coronavirus Task Force in the past, but runs contrary to an independent model followed by the U.S. Centers for Disease Control and Prevention. That model, produced by MIT graduate Youyang Gu, predicts a second wave of the pandemic that could raise the state’s death toll from 5,754 Aug. 4 to 7,744 by the start of September after it was updated Wednesday afternoon.

Gov. Ron DeSantis has expressed frustration with reports citing the IHME’s projections, particularly earlier projections that were far higher before Florida began seriously locking down and flattening its curve of infection growth.

Days after IHME revised its methodology earlier this month, the Governor attacked the model when a reporter asked about its use by the Division of Emergency Management, led by Director Jared Moskowitz.

“The models have not been accurate, and the Division of Emergency Management may do it, but I can tell you, I’ve talked with Jared multiple times about, we need to go based on facts and based off evidence and not go based off conjecture,” the Governor said.