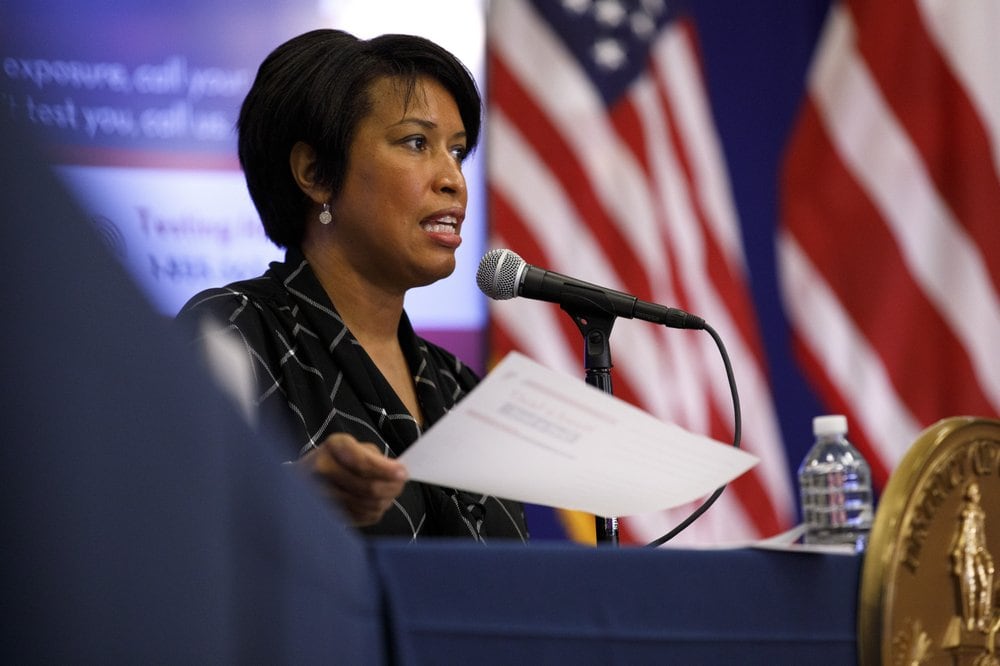 “The virus is still in our city, in our region and in our country."

The nation’s capital will begin a gradual reopening Friday, even as Mayor Muriel Bowser warns that it probably will result in more coronavirus infections.

Restaurants will be permitted to seat guests outdoors, barbers and hair salons will open with limited capacity and nonessential businesses will be allowed to offer curbside or front-door pickup services. But nail parlors, gyms and public playgrounds will remain closed and gatherings of more than 10 people will be prohibited.

Dog parks, tennis courts and golf courses will reopen, but playground equipment and public pools will remain closed. Sports that involve close contact, including football, soccer and basketball, are still banned. For now, all area businesses are encouraged to work remotely as much as possible.

Bowser said Wednesday that the public health emergency she declared in March will remain in place.

“The virus is still in our city, in our region and in our country,” Bowser said. “We know, without a vaccine or a cure, there will be new infections.”

Washington remains an area of concern. There were 263.2 new cases per 100,000 people in the District of Columbia over the past two weeks, which ranks first in the country for new cases per capita. Last week, Dr. Deborah Birx, coordinator of the White House’s virus task force, mentioned the district, Chicago and Minneapolis as areas that merited close monitoring.

All told, there have been more than 8,400 confirmed cases of coronavirus in Washington and 445 residents have died.

At the beginnings of the crisis in March, Bowser and the Health Department chief, Dr. LaQuandra Nesbitt, emphasized a pair of metrics that would help determine when to ease the lockdown: new infection cases and the percentage of positive results among those tested.

But in recent weeks, the city has shifted to a new metric—tracking the exact onset of symptoms in order to determine the state of community transmission. That metric, they say, has been trending down long enough to justify the transition. Meanwhile, the percentage of positive tests remains much higher (19.8 percent) than the 5 percent the health department originally cited as a necessary benchmark.

Washington, working closely with neighboring counties in Maryland and Virginia, has pursued a more conservative timeline than much of the rest of the nation. The Virginia counties, which held off when the rest of the state started reopening earlier this month, are now planning their own stage one reopening on Friday. In the Maryland counties bordering Washington, Prince George’s Country is planning to start reopening on June 1 while Montgomery County hasn’t yet set a date.

Bowser said she doesn’t expect all residents and businesses to embrace the newly relaxed rules. Some businesses may opt to remain closed and many residents may be slow to change their own pandemic habits.

“We know people are nervous,” she said. “This is a scary virus and they should be nervous.”

But others have been chafing under the restrictions, especially as the weather turned warm. Outside the Brookland Pint restaurant and bar in Washington, manager Asher Conerly, was busy pressure-washing the pavement outside. He expects to fit about 40 people at a time at picnic tables and he expects it to be packed and raucous as soon as they open on Friday.

“The public’s ready. They’ve been ready,” Conerly said. “It’s going to be a celebratory atmosphere and alcohol will be involved. The hardest part for us will be making sure that people act responsibly and keeping people apart if necessary.”

Conerly said he also plans to abide by a District government suggestion and collect contact information for every customer who enters — just in case there needs contact tracing from an infection.

“There will be a signup sheet when you walk in, just like a doctor’s office,” he said.

Bowser had maintained for weeks that the nation’s capital wasn’t ready even as President Donald Trump openly cajoled Governors to reopen faster and encouraged protests against the closures.

Bowser would not speculate on how long the first phase of the reopening plan would last and she said the relaxed restrictions could be “turned up or turned down” based on new developments.

With the emphasis on outdoor restaurant seating, Bowser said her administration is studying establishing pedestrian zones in the streets so restaurants can take up more space on the sidewalk. Efforts were underway to “reimagine sidewalks roads and other spaces,” she said.

Trump’s sense of urgency to return to normal may set up a collision course with Bowser’s government in the summer. White House spokesman Judd Deere said Tuesday that Trump wants to hold an Independence Day celebration on July 4 and indicated that such an event could be held safely.

“It will have a different look than 2019 to ensure the health and safety of those attending,” Deere said.

He added that the event would be both a celebration of the country’s independence and a tribute to the American people who have “shown tremendous courage and spirit in the fight against this global pandemic.”

“Given the number of individuals that would try to attend such an event, logistically such an event would be impossible to put on safely,” said the letter, which was organized by Rep. Don Beyer of Virginia and signed by 10 other congressional Democrats with constituencies in the capital region.

Bowser on Wednesday refused to comment specifically on Trump’s plans. But she pointed out that the annual Independence Day parade was canceled weeks ago. She said discussions were ongoing regarding the safest ways to hold a holiday fireworks display.

“We’re going to continue to work with the Department of the Interior,” she said. “I am hoping we’re going to arrive at a situation that’s going to be safest for Washington, D.C., and any visitors.”

Last year’s July Fourth event featured tanks, a military flyover and a Trump speech at the Lincoln Memorial. The district says it still hasn’t been reimbursed by the federal government for security costs related to the event.