Strong week to close out May.

The week ending May 28 was a strong week for Florida’s medical marijuana sector in general, with gains overall and in smokable flower.

Florida’s Office of Medical Marijuana Use reported Friday that systemwide, 112,801,332 milligrams of THC moved, up from 107,823,503 milligrams the week prior.

In terms of both overall sales and that of smokable flower, Trulieve had well over 50% of the market. The company, which has 50 storefronts in the state and the most aggressive marketing team of all, moved 60,456,214 milligrams and 19,440.396 ounces of flower.

In the context of that market share, the race for second place and beyond is the real story, as a number of players jockey for position for different demographics.

Surterra Wellness came in second in both total milligrams moved and ounces of smokable marijuana, but essentially replicated the previous week’s performance, with 12,433,035 milligrams of THC moving and 4,017.518 ounces of flower.

Trulieve and Surterra are two of the state’s legacy companies, with Surterra slower to react to changes in consumer preferences that Trulieve often has led on. The company was late to offer flower product, but their sheer retail footprint and budget pricing have allowed them to make up for lost time.

In third place for total milligrams moved was MUV , which sold 9,845,411 milligrams of product. However, they continued to see attrition in the flower market, slipping to just 1,946.820 ounces of product, good for fifth place.

In fourth place overall is Curaleaf , which moved 8,538,219 milligrams of product, but out-maneuvered MUV for fourth place also in flower sales, with 2,198.285 sold. The company has run a month-long sale on flower that ends this week, suggesting potential June market attrition.

Closing out the top five in sales was Liberty Health Sciences.

LHS, which has made its play around Flower Fridays and the cheapest product in the medical program, took a big jump in total milligrams sold, to 6,334,392 last week. That’s up nearly 700,000 from the week before.

However, the play being made by the company in flower sales is more auspicious. The 3,548.008 ounces moved last week almost doubled the 2,048.363 moved the week before.

They may be competing next week with Surterra for second in the flower market, if these trends hold. 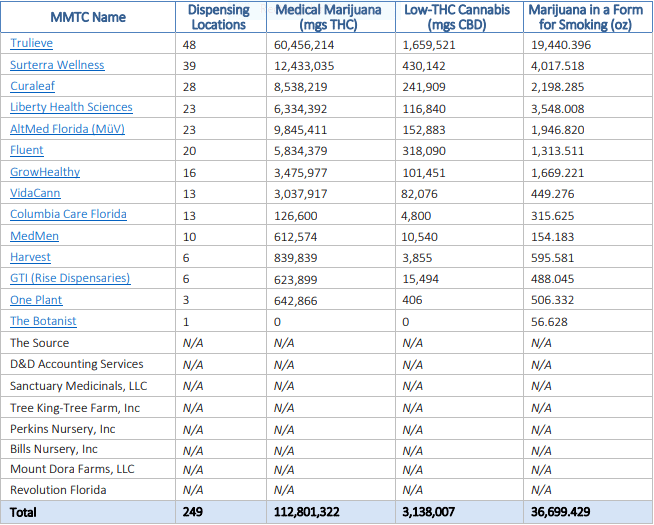