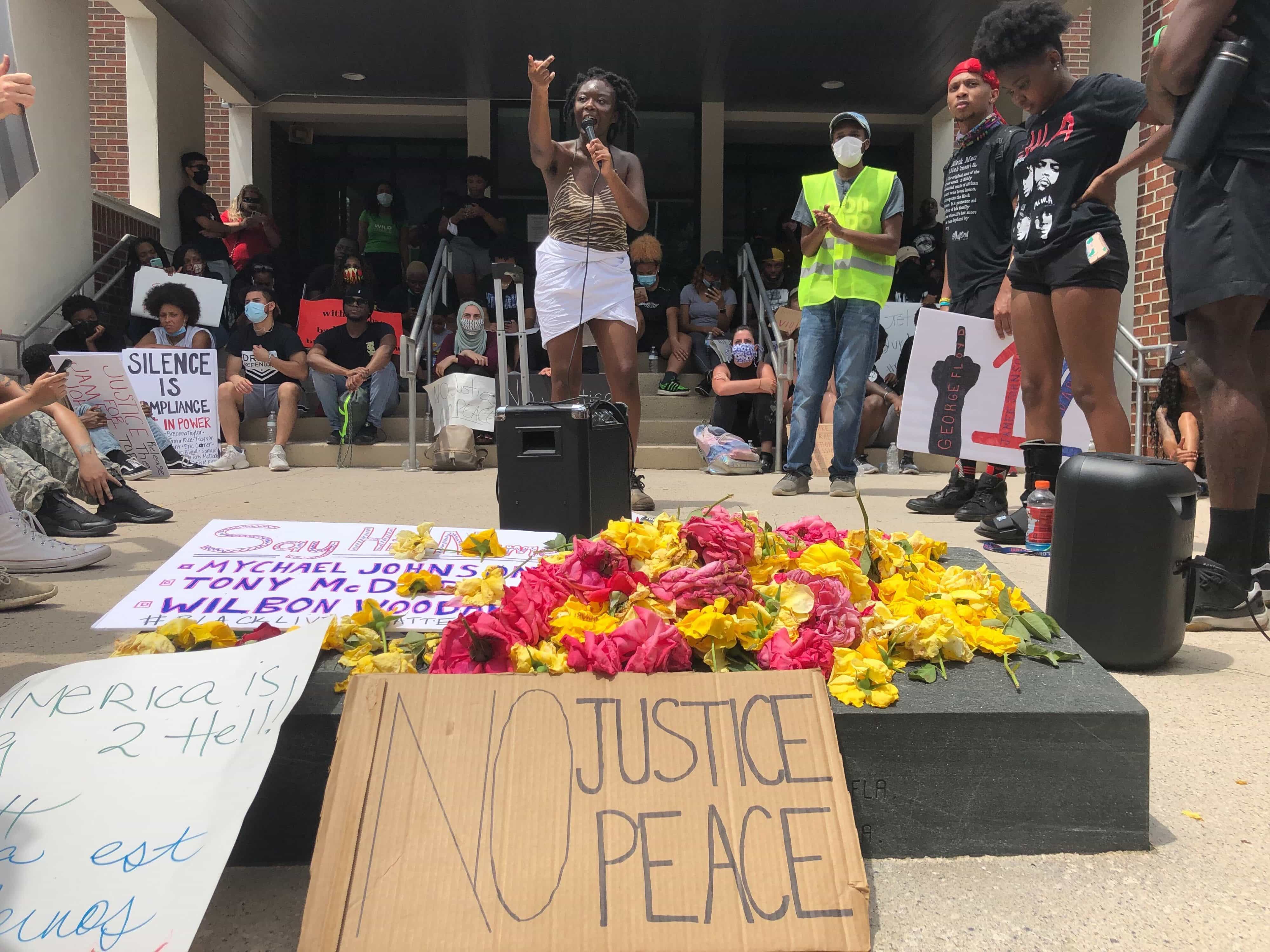 The protest grabbed the attention of local leaders.

Protesters took to the streets of Tallahassee on Saturday after the local death of a black man accentuated other fatal police incidents across the country.

Tony McDade, 38, was fatally shot Wednesday by a white Tallahassee police officer after he stabbed his next-door neighbor, 21-year-old Malik Jackson, and allegedly pointed his gun at an officer.

No charges have been filed against the officer and at a news conference, Tallahassee Police Chief Lawrence Revell said the shooting appeared justified and not motivated by race.

The city’s response has outraged some members of the community.

“Nobody has been held accountable in the past,” said protester Sarah Turner. “This system needs to be fixed so more black people don’t die in the streets.”

The generally peaceful protest, which stretched several miles from the Tallahassee Police Department to the Florida Capitol Building, was underscored early Saturday when a pickup truck accelerated into protesters.

Tallahassee Police Department Deputy Chief of Police Maurice Holmes declined to comment on the incident but Tallahassee Mayor John Dailey later tweeted that the driver was in police custody and no one was seriously injured.

This is the inside of that red truck, seen accelerating into a protestor in multiple videos now circulating. I will have more info on the driver soon pic.twitter.com/3m7ozo2l20

Despite the incident, protesters continued their march, traveling back and forth from the police department to the state Capitol, where they staged a sit-in at the center of one of the city’s busiest intersections and demanded local officials to meet them.

“People are upset right now and understandably so,” Holmes said. “The last thing we need to do is cause an uprising by trying to say you can’t do this and you can’t do that. We think it’s easiest for us to just shut down the road and reroute traffic because if you do that, give them that voice, things won’t escalate, we’re hoping.”

#BlackLivesMatter protesters are now staged in front of the Old Capitol Building. #Tallahassee police have shutdown the intersection. pic.twitter.com/oWt0ABxf5z

“I want them to know that I hear them, we hear them and we understand,” Williams-Cox said. “It takes time to investigate. We have to give the process time.”

Williams-Cox said she sympathizes with protesters as she has felt the need to protest perceived injustices in the past.

“I appreciate their right to protest, Williams-Cox said. “I used to do it myself and I still do if I need to, so I understand. But we got to be lawful, patient and be considerate of the process so we don’t make a mistake. He’s not going anywhere, he’s going to be right here.”

Tallahassee City Manager Reese Goad and other city commissioners also met with some remaining protesters later in the evening.

Goad said the peacefulness of the protest serves as a “testament of our community” and reassured protesters that “they are not going unheard.”

“We realize, nationally, how fragile we are as a country right now,” Goad said. “Oftentimes our perspective is only from our point of view and so I think the conversation we just had was important. Lots of listening and hearing different thoughts and concerns.”

It’s hard to put a number on crowd size.

But this angle offers some perspective. #Tallahassee #BlackLivesMatter pic.twitter.com/6NrfMxBciA