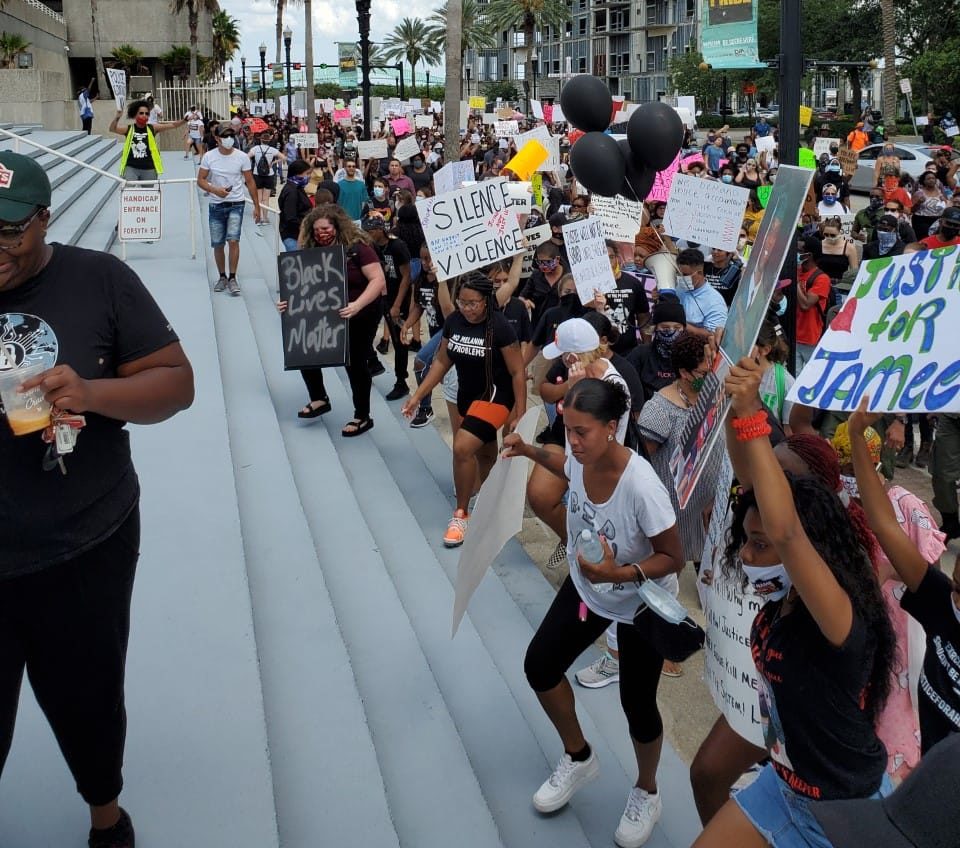 Smoke bombs and a scuffle with police turned the protest violent.

What was a peaceful protest in downtown Jacksonville Saturday turned violent in the late evening as armored police clashed with protesters over the backdrop of smoke bombs.

People were injured after police attempted to apprehend a protester, setting off tensions already heightened in the protest against excessive force by police in the wake of the death of George Floyd in Minneapolis this week.

About 3,000 people descended on downtown to peacefully protest, but a clash with some of the 60 fully-equipped police officers backed by two armored vehicles near the intersection of Bay Street and Newnan Street escalated. Multiple people were injured.

The demonstration started outside the Jacksonville Sheriff’s Office (JSO) headquarters on Bay Street with the throng of protesters ascending the two flights of steps near the entrance to the police building.

“No justice, no peace. No racist police,” the crowd shouted in unison.

Then the demonstration proceeded to wind through what eventually would amount to miles of streets in downtown Jacksonville, snarling traffic and chants from the crowd echoing off the buildings in the urban core. The demonstration started at 3 p.m. and was supposed to last until 4:30 p.m. but it proceeded into the evening with protesters still walking streets past 6 p.m. until it turned violent around 7 p.m.

One of the protesters, Brennan Reed, said he’s fed up with repeated incidents of black residents ending up dead in encounters with police.

“We’re here mainly for justice, equality and police accountability,” Reed said. “Anyone who disagrees with that, it just boggles my mind.”

One police officer was charged Friday with third degree murder in Floyd’s death. But protesters in Minneapolis and across the country have called for the other responding officers to be charged for their role in the events leading to Floyd’s death.

Early on in the demonstration in Jacksonville, a small airplane circled above the protest area towing a sign that said, “Stay safe, always film the police.”

Jacksonville Community Action Committee orchestrated the protest. One of the group’s organizers, Monique Sampson, said they planned a nonviolent event and didn’t intend to repeat outcomes from many demonstrations that turned physically confrontational Friday in cities across the country.

Sampson said organizers only expected 500 people and when the demonstration swelled to many times that size, she was pleasantly surprised.

“This was great,” Sampson said while marching through downtown streets, before any violence.

Another organizer with the group, Hakeem Balogun, said he also was surprised the size of the demonstration was larger than anticipated. He said while George Floyd’s video-recorded death was a flashpoint for the demonstration in Jacksonville, there were many local issues that galvanized the local crowd.

Organizers also demanded more information on the police shooting death of Jamee Johnson who was killed by a JSO officer Dec. 14 during a traffic stop.

JSO officials maintain patrol car dashboard video is not available and the body cam became dislodged during the incident.

Protester Arden Phipps said it shouldn’t be surprising to see demonstrators of all races.

JSO officers were largely spectators with uniformed police out of sight other than standing on the side of the streets and some directing traffic.