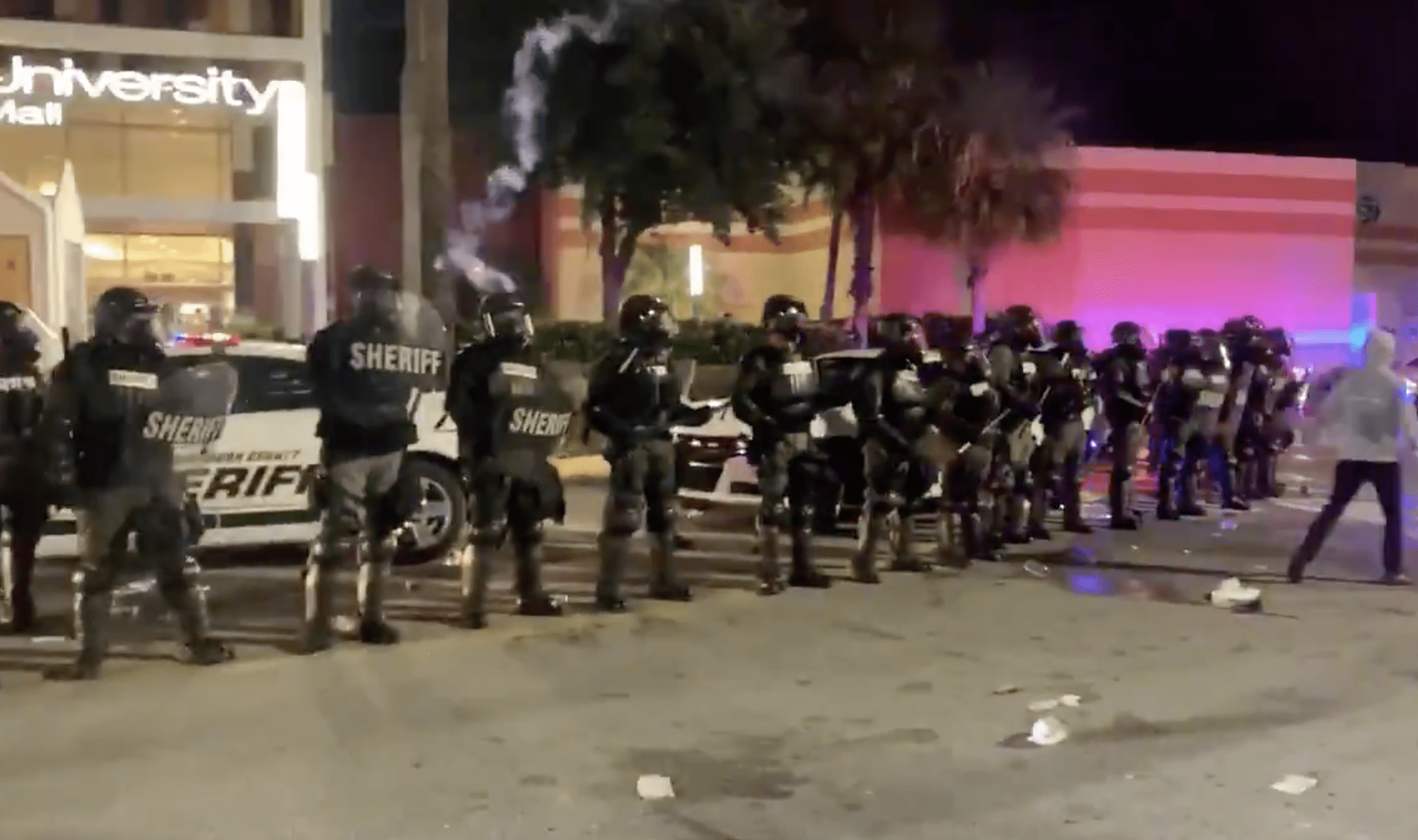 The incident is related to George Floyd protests.

The University of South Florida reported shots fired near campus late Saturday night due to “civil unrest.” Looting, rioting and fires have also been reported.

The school alerted students and faculty in a text message at 10:24 p.m.

Unconfirmed rumors suggest someone may have been shot, though deputies later said the shooting appeared unrelated to protests, according to the Tampa Bay Times.

“Major rioting near USF, VA hospital, TGH, Moffitt. Included someone being shot. I got co-workers due for MN work shift… I’m not sure they are going to be able to get there safely,” tweeted Jennifer Horsley.

Champs Sports has been looted and fully involved. #TampaProtest pic.twitter.com/kBeQnEihc5

The Hillsborough County Sheriff’s Office tweeted a deputy had been transported to the hospital after being struck with a hard object.

UPDATE: An HCSO deputy is en route to the hospital after being hit in the back of the head with a hard object at University Square Mall. Protesters: Violence, looting and vandalism are unacceptable. You WILL be arrested. #SheriffChadChronister #TeamHCSO #universitymall

Another twitter user claimed a gas station was on fire.

gathering info for you now but shots were fired in near USF today due to civil unrest, also a gas station is currently on fire and burning as i type this, please be careful

Yet another video shows what appears to be a protester throwing a tear gas canister back at Tampa Police Officer.

Police shoot out tear gas — just for protestors to pick it back up and throw it back. This is all happening at University Mall, which is on total lockdown by police. #TampaProtest pic.twitter.com/9pAlFFXkRJ

WFLA reports a jewelry store across the street from University Mall was looted, losing at least $100,000 worth of product. The Gold N’ Diamonds store had broken windows and doors and empty jewelry boxes were strewn along the sidewalk in front of the store. The outlet reported other businesses that were looted including a CVS.

A number of looters have been arrested tonight after peaceful demonstrations near USF spiraled out of control. Here’s a look at the aftermath at Gold N Diamonds on Fowler Ave. @wfla pic.twitter.com/tgg2JwLAtq

Earlier in the evening Tampa Police closed Busch Blvd. between N 26th & N 34th St. due to protesters throwing rocks during a demonstration, according to the department’s Twitter feed.

A follow up moments after the first USF text reminded students to remain indoors “until further notice.”

As of 11:20 p.m. no further notice had been communicated.

Shots were fired during protests over the death of George Floyd in Minneapolis who died earlier this week after a police interaction resulted in him being detained while an officer placed his knee over his neck. Floyd could be heard on video saying he couldn’t breathe before he died.

A video from University Mall posted to Twitter shows dozens of officers lined up with tear gas canisters deployed.

Earlier in the day protests in the area resulted in unrest after protesters launched fireworks into a crowd of police officers, striking one, but not injuring the officer. Rocks and other objects were also reportedly thrown at officers and an empty Hillsborough County Sheriff’s vehicle was damaged.

A spokesperson for the city of Tampa did not immediately have information about the incident. The Tampa Police Department’s media relations line rings several times before the line goes dead, an unusual occurrence.

This is a breaking story. Check back for updates.