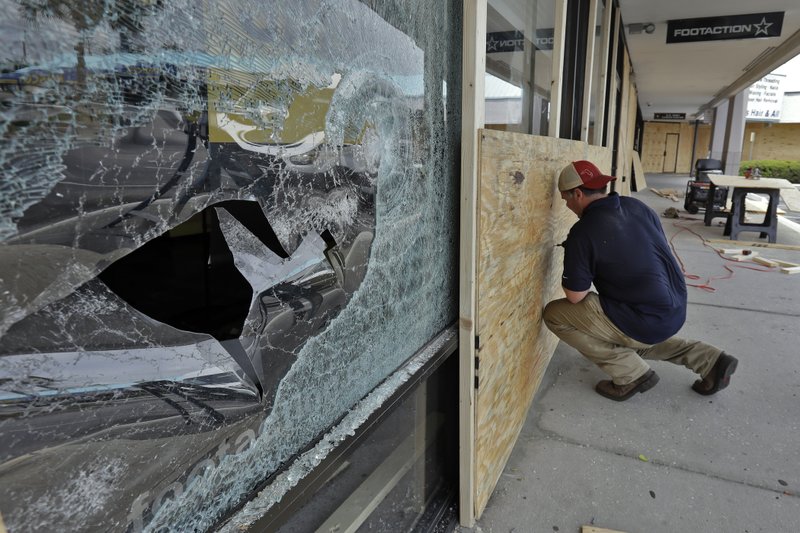 The incident happened during protests Sunday.

Fort Lauderdale police suspended an officer after video showed he pushed a kneeling black woman to the ground during protests over the police killing of George Floyd in Minnesota, escalating a clash where bottles were thrown and tear gas was fired.

Also in Fort Lauderdale, the state attorney’s office fired a prosecutor Monday for calling demonstrators “animals” at the zoo in a quickly deleted Facebook post.

In the officer’s case, colleagues quickly pushed him away from the woman and down the street Sunday. Police and city officials said it happened as a peaceful demonstration attended by about 1,000 people was dispersing, and smaller groups broke some store windows and sprayed graffiti.

Police Chief Rick Maglione did not defend the actions of Officer Steven Pohorence, but said Monday that Pohorence pushed the woman after he and other officers had just rescued one colleague who had become surrounded and another from a patrol car that people began jumping on.

Maglione said Pohorence’s actions will be investigated by the Florida Department of Law Enforcement before an internal investigation is conducted.

Maglione said he understands why some believe the shove provoked the crowd to throw bottles, but he said there were people in the crowd with bricks, bottles, fireworks and other weapons who were hoping to start a fight with officers.

“I don’t think (Pohorence’s) action created what occurred,” the chief said. But he said Pohorence’s actions “could have added to what was going on,” and he commended Officer Krystle Smith who pushed Pohorence away from the woman.

“She did what you are supposed to do: When you see either adrenaline or emotion or some kind of interaction going south … that is our job to do, is intervene,” he said. Police declined to make Smith available for an interview Monday.

Fort Lauderdale Mayor Dean Trantalis said he felt the Pohorence’s actions were “offensive,” and he’s happy the department has suspended him.

Demonstrator Samantha Sweeting Davis said she didn’t see the shove, but heard yelling, then saw about six police cars arrive with sirens on. Then she saw bottles being thrown at officers, heard an explosion, and tear gas burned her eyes and throat.

It was upsetting to see that kind of behavior from an officer who is supposed to “protect and serve,” the 29-year-old high school counselor from Fort Lauderdale said. “Suspension is a great first step, but honestly I want to see the officer de-badged.”

Meanwhile, the State Attorney’s Office in Broward County, fired prosecutor Amy Bloom for writing on Facebook: “Act civilized and maybe things will change. I’ve never seen such animals except at the zoo.” She said her description applied to protesters regardless of race. The South Florida Sun Sentinel reported Bloom quickly deleted the post, but someone copied it and it eventually reached her bosses.

The State Attorney’s Office confirmed the firing in a statement, saying her views are “entirely inconsistent” with its “ideals and principles.”

Bloom said Monday on Facebook that she realized the post could be misinterpreted, deleted it within seconds and that “I believe in justice for all and that ALL lives matter.”

A curfew remains in effect in Broward County.

Elsewhere in Florida, mostly peaceful protests were held over the weekend, but some Miami police cars were burned and storefronts damaged. That led Miami-Dade County Mayor Carlos Gimenez to postpone Monday’s reopening of the county’s beaches after a coronavirus shutdown.

In Orlando, Police Chief Orlando Rolon said Monday that officers had to fire tear gas Sunday night after some demonstrators started throwing objects found at a highway construction site. He said his officers made 30 arrests Sunday night, including some who broke into stores.

At one point during Sunday’s protests, Rolon and Orange County Sheriff John Mina knelt in solidarity with protesters outside the Orlando Police Department.

In Tampa on Monday, six members of the Omega Psi Phi fraternity prayed outside two businesses, Saigon Vietnamese Restaurant and Champs Sports, that were destroyed by arson on Saturday.

Pastor James Gallon said the people who were destructive were from elsewhere.

“Then they leave and drive away on the interstate,” he said.