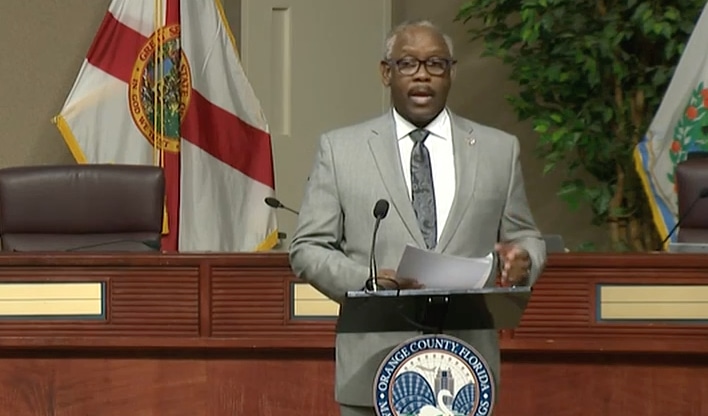 Though he didn’t explicitly say so during a news conference late Friday morning, Demings’ staff later clarified, “Mayor Demings is not in favor of hosting the RNC.”

The Republican National Committee has been planning to hold its national convenient in Charlotte, North Carolina. But Trump is mad at the state’s Governor for his cautious approach to reopening the economy in the coronavirus crisis. The President has demanded that, at the very least, the Republicans’ presidential nomination acceptance event be moved to another state.

The RNC has indicated that Orlando and Jacksonville are in the running.

Demings has previously expressed reluctance to extend an invitation for the Orange County Convention center, which he controls, out of concerns over cost.

On Friday, however the Mayor made it clear his concerns are about political unrest.

“Here we find ourselves, on top of a pandemic, we now have demonstrations, daily, day after day after day, where our first responders are being tasked to deal with the present age that we live in,” Demings said. “Infuse, then, politics into the equation, with a political convention. I think it’s an ingredient for failure.”

In the wake of last week’s slaying by Minneapolis police of George Floyd, demonstrations and occasional riotous protests already are occurring in Orlando, as in most major cities. That comes even as people who’ve gotten ill or lost their jobs due to the coronavirus pandemic are struggling, tired, anxious, angry, scared, and frustrated, Demings pointed out.

He held back from explicitly blaming Trump or Republicans. However, many of the demonstrators are doing so.

“Right now, in America, America’s got a problem. The perception, in terms of justice, inequality, etcetera. And no matter which political party that you are a member of, I believe that any community that hosts a political party’s convention in the environment and conditions we have now are going to be susceptible to mass demonstrations,” Demings said.

“I don’t want that for our community,” he said.

Jacksonville Mayor Lenny Curry wants the convention. And Gov. Ron DeSantis said he wants any political conventions, in any Florida city. But they’re both Republicans, like Trump. Demings is a Democrat.

Also, Demings’ wife U.S. Rep. Val Demings might be on the ticket running against Trump in the November election as Joe Biden‘s running mate.

“I love my community. First, I’ll start there,” he said. “And my job as Mayor is to make decisions in the best interest of all Orange County residents. Having said that, when I make those decisions, I have to look at the totality of the circumstances,” he said.

The Orange County Convention Center is not the only Orlando-area venue that could host a Republican presidential nomination speech event. Conceivably, the Amway Center arena could as well, and possibly the Dr. Philips Center for the Performing Arts. However, Demings also has some say in their operations, along with fellow Democrat and close ally Orlando Mayor Buddy Dyer.

Then there are a number of very large private convention facilities around town, in a large swath of the tourist corridor running from Walt Disney World through International Drive. However, private facilities would not be immune to the kind of demonstrations Demings said he worries about, and so they might be reluctant to step forward.