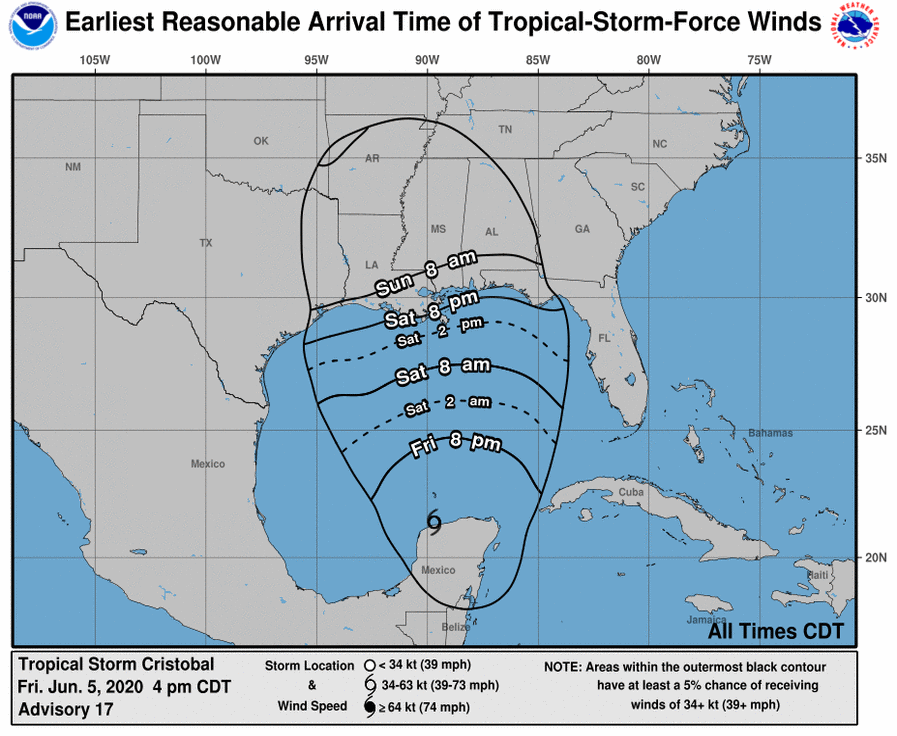 A tropical storm warning was issued for the northern Gulf of Mexico including portions of the Florida panhandle late Friday as Tropical Storm Cristobal moves north. The storm is expected to make landfall late Saturday.

“Heavy rainfall will spread into portions of the Gulf Coast, from east Texas to Florida this weekend into early next week, with areas of flash flooding,” the National Weather Service advised.

The National Weather Service warns that the tropical storm has the potential to deliver dangerous marine and beach conditions, heavy winds and rainfall, coastal flooding and possible isolated tornadoes from the Okaloosa/Walton county line and westward.

“Residents in these locations should follow advice given by local emergency officials,”  the National Weather Service advised.

TROPICAL UPDATE: As of 5pm EDT, @NOAA's #GOES16 🛰️ was tracking #TropicalStorm #Cristobal as it moves northward through the #GulfofMexico. A #TropicalStormWarning and #StormSurge Warning are both in effect for parts of the #GulfCoast. Get the latest: https://t.co/NEqHONNFpa pic.twitter.com/Qq5tUHZET4

Current models forecast the tropical storm to gradually strengthen through Sunday before slightly turning northwest toward later that day.

The storm is expected to make a direct impact on Louisiana, where evacuation orders are in effect in Grand Isle ahead of impact.

Monday marked the start of a 2020 hurricane season which is expected to bring “above-normal” activity, according to the National Oceanic and Atmospheric Administration.

For 2020, NOAA forecasted a range of 13 to 19 named storms, six to 10 of which could become hurricanes. The NOAA also estimated that three to six of the storms could be major hurricanes producing winds of 111 mph or higher.

nextBlake Dowling: With SpaceX, America looks back to The Final Frontier