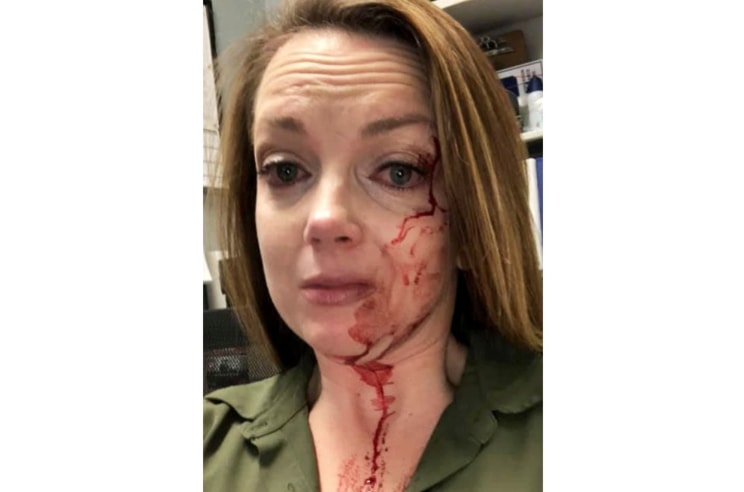 For weeks Samantha Clarke calmly listened to the insults and threats directed daily at her and her employees by people who learned they couldn’t enter the Modesto, California, store without wearing a mask and following other coronavirus-related rules.

But never, says the 17-year veteran of retail sales, did she expect she’d be sucker-punched and left with blood gushing from her battered face. Not until it happened recently after a customer was told the last above-ground swimming pool in stock had just been sold to someone else.

“I’ve been in retail my whole life. I’ve been at this particular job 17 years, and I’ve never heard of anyone being attacked, ever,” Clarke said by phone one recent evening after finishing the night shift.

But in retrospect she said, perhaps she should have seen it coming.

“We had the normal upset customer from time to time, but rarely did someone lose their temper and cuss at us,” she said of life before the store she manages began operating under state-issued coronavirus safety guidelines.

After months of living with such restrictions, the level of stress among people clearly has reached a boiling point, and not just in California, said Rachel Michelin, the California Retailers Association’s president and CEO.

“There’s just a high level of frustration everywhere right now,” Michelin said last week in words that seemed to presage the nationwide eruption of protests following the death of George Floyd, a black man in Minneapolis who died after a white police officer pressed his knee into his neck for several minutes.

Although the protests that are gripping major cities and suburbs from coast to coast have been mainly peaceful, riots that have broken out during some have resulted in retail businesses being looted and vandalized.

After Clarke put photos of her bloody, bruised face on her personal Facebook page along with an explanation of what it’s like to work in retail sales these days, it was shared thousands of times, prompting her to create a separate page, “Retail Life During COVID-19,” to handle the response. Within days the page attracted tens of thousands of followers.

Thousands commented on her original post and subsequent messages as she talked of contacting the police and of healing physically and emotionally. Several comments came from others who say they work in retail too and since the pandemic have been faced with an unending string of abuse.

“My co-worker was spat on by a person who wouldn’t wear a mask,” one person who said she worked in retail in Riverside, California, told Clarke.

Others posted news stories of attacks occurring around the country, including at a Flint, Michigan, Dollar Store where a security guard was shot to death last month after telling a woman she couldn’t enter without a mask.

“We are hearing an increasing number of reports of abuse and violence directed against retail workers who are doing their jobs by asking customers to wear face masks or comply with other guidelines intended to protect their own safety,” David French, senior vice president for government relations for the National Retail Federation, said in a statement. He called on authorities to prosecute such cases “to the fullest extent of the law” and do a better job of protecting retail workers.

For most people, the coronavirus causes mild or moderate symptoms such as fever and cough that clear up in two to three weeks. For some, especially older adults and people with existing health problems, it can cause pneumonia and death.

The masks seem to upset customers the most, said Clarke, although many shoppers don’t like rules requiring people to stay 6 feet apart or the store’s policy of banning the return of items during the pandemic.

“I had one lady threaten to burn the store down because we wouldn’t take her return,” she said. “It’s insane.”

Clarke was attacked on May 6 as she was hearing a complaint from a woman angry the pool she wanted to buy was gone by the time she got there. A cashier had agreed to hold it for 30 minutes. But by the time she arrived, about an hour later, the hold had been lifted and it was sold.

“She just started throwing stuff off the counter and in such a rage that items were hitting her baby stroller,” Clarke said, adding she couldn’t tell if there was actually a baby in the woman’s stroller, which was covered by a blanket.

She was about to tell her to leave, Clarke said, when she was hit.

By the time she cleared her head, blood gushing from a gash above one of her eyes, the woman had left. Clarke followed her outside and got a fairly good photo of her, her face partially obscured by a mask. But the woman had used the baby blanket to cover the car’s license plate before she drove away.

An ambulance took Clarke to an urgent care center to have the gash above her eye patched.

Modesto police put the photo of the woman on their crime stoppers page and are continuing to investigate, said Sharon Bear, the department’s public safety information coordinator.

Despite the attack, Clarke said she still loves her job, the people she works with at the store (she declined to name it under orders from its corporate owner) and the customers who frequent it in Modesto, a Central Valley city of 200,000.

As people have found her Facebook group, she has noticed it has become not only a place for other salespeople to vent but also for customers to express condolences.

“I think something good is coming from this,” she said. “People are showing a lot of support for anyone who posts what they’ve gone through that day. It’s just really cool to see people supporting retailers.”