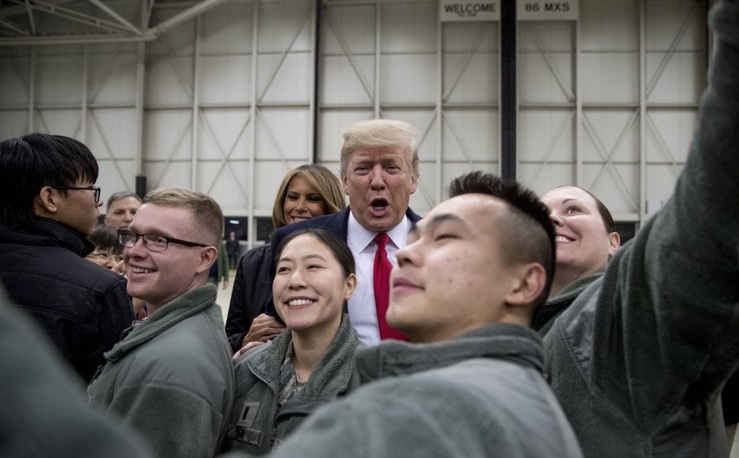 Germany’s defense minister suggested Monday that U.S. President Donald Trump’s reported plans to withdraw more than a quarter of American troops out of Germany could weaken not only the NATO alliance but the U.S. itself.

Trump is said to have has signed off on a plan to reduce the total of troops stationed in Germany from 34,500 to no more than 25,000, according to reports by The Washington Post and The Wall Street Journal, but German Defense Minister Annegret Kramp-Karrenbauer told reporters that Berlin hasn’t yet been informed of any such move.

The U.S. Embassy in Berlin declined to comment and the Pentagon hasn’t confirmed the reports.

If the U.S. goes ahead, however, she suggested the move would do more harm to NATO as a whole than to Germany’s own defense.

“The fact is that the presence of U.S. soldiers in Germany serves the entire NATO alliance security, including America’s own security,” she said. “That is the basis on which we work together.”

The Trump administration has been urging Germany to spend more on its defense to meet the NATO goal of spending 2% of gross domestic product on defense, and American officials in the past had raised the possibility of moving troops out as a veiled threat.

As such, the government’s coordinator for trans-Atlantic relations, Peter Beyer, said if the plan is confirmed it wouldn’t be a surprise, but that it was irritating to first learn of the possibility through media reports.

“The German-American relationship could be severely affected by such a decision of the U.S. president,” Beyer told the dpa news agency.

“It’s not just about 9,500 soldiers, but also about their families, so about 20,000 Americans. This would break down trans-Atlantic bridges.”

The days are long gone when hundreds of thousands of American troops were stationed in Germany as a bulwark against the possibility of a Soviet invasion.

Today, the country is much more a hub for wider American military operations.

Facilities include Ramstein Air Base, critical for operations in the Middle East and Africa and headquarters to the U.S. Air Forces in Europe and Africa; the Landstuhl Regional Medical Center, which has saved the lives of countless Americans wounded in Iraq and Afghanistan; and the headquarters of both U.S. European Command and U.S. Africa Command in Stuttgart.

Germany is also home to the headquarters of U.S. Army Europe in Wiesbaden, an F-16 fighter base in Spangdahlem, and the Grafenwoehr Training Area, the largest NATO training facility in Europe.

“If this is confirmed, you have to ask yourself what impact this will have on NATO and the security architecture in Europe,” Beyer said.

Germany has been increasing its defense spending and the issue of troops had lain dormant for many months.

It wasn’t immediately clear why it was being brought up again, but Trump’s decision came shortly after Chancellor Angela Merkel said that she wouldn’t attend a Group of Seven summit in person in the U.S. if the president decided to go ahead with it. Shortly after the chancellor’s announcement, Trump said he was postponing the summit.

German Foreign Minister Heiko Maas acknowledged over the weekend that current ties with Washington were “complicated.”

He voiced concerns in an interview with Bild newspaper that the U.S. presidential election campaign could further polarize Washington and stoke populist politics.

“Then co-existence within the country doesn’t just become harder, it also fuels conflicts on the international level,” he was quoted as saying. “That’s the last thing we need.”