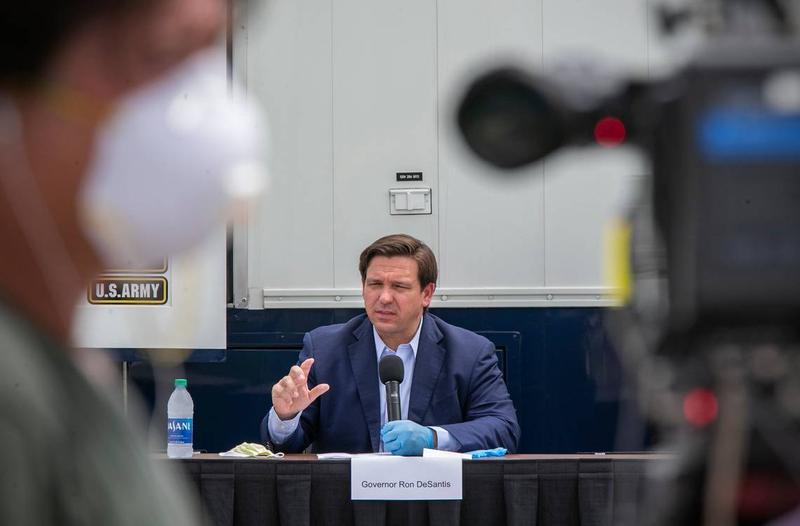 “Florida’s performance has proved uniquely poor in its abject inability to assist millions of Florida residents who have applied for and continue to await unemployment benefits,” they wrote U.S. Labor Department Inspector General Scott Dahl.

“Are they U.S. Senators from Florida,” DeSantis asked rhetorically, laughing, knowing that Senators Marco Rubio and Rick Scott would be unlikely to make such a play.

“I’ve never heard of partisan politics in Washington D.C. before,” the Governor quipped. “Oh my goodness, can you imagine that?”

Schumer and Wyden sent a letter requesting an investigation into the federal agency’s oversight of Florida’s problems in carrying out expanded unemployment benefits under a federal-stimulus law known as the CARES Act.

In the letter, Schumer and Wyden wrote that in addition to “repeated crashes and glitches” experienced by Floridians seeking jobless benefits, “inaction from both current and past gubernatorial administrations in Florida left (the state Department of Economic Opportunity) completely unprepared to respond to record increases in unemployment claims caused by a pandemic.”

“Florida Governor Ron DeSantis recently stated that the program was ‘designed with all these different things, basically to fail’ and acknowledged that more changes are needed,” Schumer and Wyden wrote. “Drastic improvements are needed, and it is unclear what steps are being taken immediately to mitigate the possibility of future failures in FLDEO’s (the Department of Economic Opportunity’s) unemployment processing system.”

As of Sunday, the department reported receiving about 2.35 million claims since March 15, with nearly 1.35 million “eligible” claims processed. About 1.25 million people had been paid state and/or federal benefits, while another 476,700 had been ruled ineligible for assistance.

The Governor also couldn’t give a definite timeframe as to the resolution of the state Inspector General investigation.

“It’s going to take time,” DeSantis said, describing the “procurement process” for the state’s CONNECT website. “This took place over a number of years.”

The Governor added that the state has paid more than $4.6 billion in unemployment claims.

“We’ve really been able to pick this thing off the mat,” DeSantis added, vowing that “we’re going to do more.”

DeSantis, speaking to reporters in Tallahassee last month, said he authorized Inspector General Melinda Miguel to commence an investigation into the CONNECT site, implemented during the Scott administration.

The Governor said getting answers about the site’s myriad failures was “very important for people.”

“A lot of money went into this site,” and “people want an accounting,” DeSantis said.

DeSantis has described the website variously as “designed to fail” and a “jalopy in the Daytona 500,” descriptions that failed to mollify many of those waiting to get their payouts.

previousDivision of Unclaimed Property returns $24 million in May, sets pace for record year