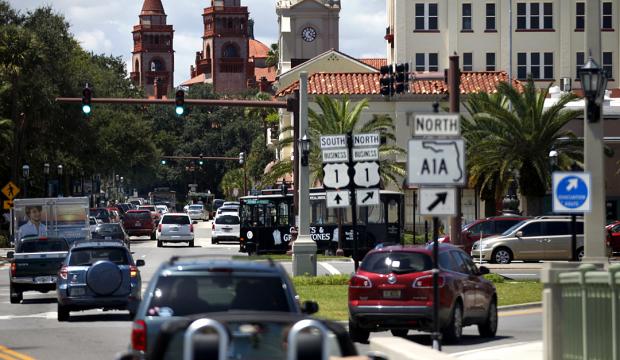 Northeast Florida tourism officials say they’re more than ready to handle the influx of visitors that will inevitably come when the Republic National Convention arrives in Jacksonville and expect a substantial economic impact.

“This is exactly what the industry needs,” said Michael Corrigan, president and CEO of Visit Jacksonville, the city’s tourism bureau. “Obviously, tourism came to a grinding halt when COVID-19 started and a lot of people lost their jobs or were furlough or whatever.”

“Bringing in a group of this size will put  a lot of people back to work almost immediately,” Corrigan said.

President Donald Trump’s victory speech will be held at the VyStar Credit Union Veteran’s Arena most likely in the later part of the week between Aug. 23 – Aug. 27 in downtown Jacksonville while some convention activities will remain in Charlotte, N.C.

Corrigan said his office networked with tourism bureaus in surrounding counties to map out a broad hospitality plan to dedicate 10,000 hotel rooms for conventioneers. In all, Duval, Clay, Nassau, St. Johns and Flagler counties are chipping in.

The Amelia Island Convention and Visitor’s Bureau has already secured at least 375 rooms at the oceanfront Ritz Carlton hotel specifically for convention visitors. The 400-room venue is already sold out for that week.

Gil Langley, president and CEO of the Amelia Island Convention and Visitors Bureau in Nassau County, said they have a total of 4,000 rooms and another 2,100 vacation rentals that will likely be occupied during the convention, held during a traditionally slow tourism season.

“Amelia Island will shine during this convention,” Langley said. “Most kids go back to school in mid-August and there’s a definitely a slow-down.

“The convention means this [season] is going to be stronger than we anticipated,” Langley said.

He said his bureau expected visitation revenues 40% what they see in a normal year due to the coronavirus outbreak. But the convention visitors will likely push that figure up to about 65%.

Richard Goldman, president and CEO of the St. Augustine, Ponte Vedra & The Beaches Visitors and Convention Bureau, has long been part of coordination between Northeast Florida tourism bureaus. Goldman said the immediate impact on the traditionally tourism-rich St. Johns County will be important, but the long-term bounty will be nearly incalculable.

“We won’t know the immediate financial benefit until after the event,” Goldman said. “The long-term benefit I think is more in the perceptions.”

Political conventions bring a unique tourism clientele, Goldman said. Many of the participants have higher incomes and many coming from around the U.S. own businesses themselves.

“This is their opportunity to see all of Northeast Florida, but from my perspective, to see St. Johns County and the assets we have. They could consider possibly moving their businesses here or allow us to host future events,” Goldman said. “Those are the kinds of things that are the gifts that keep on giving after you host an event like this.”