Hats off to NASCAR, and Jacksonville can take a bow. But although numbers don't lie, which numbers do we believe?

We’re not yet halfway through 2020, but the year that should have never been has overstayed its welcome.

We don’t need to recount all the things this cursed stretch of days brought us, much of it unwanted. But even in the gloom and despair thanks to events we know so well, there might be sprouts of hope.

Hats off to the music superstars once known as Lady Antebellum. Out of recognition to what’s happening in this country, the group changed its name to Lady A. No more references to the antebellum history of the deep South because we’re not that country anymore.

More change likely is on the way, and it’s needed. There will be resistance, as there always is when it’s time to discard the old ways. If the misery wrought by 2020 is to have any meaning, though, that change must happen.

And now, here we go with our weekly exercise known as Winners and Losers.

Honorable mention: Sen. Marco Rubio. The Washington Post declared that Florida’s senior U.S. Senator, who chairs the Senate Committee on Small Business and Entrepreneurship had, “perhaps his most consequential three months in Congress.”

Rubio helped bring the Paycheck Protection Program into reality, and many consider it the most important congressional response to the pandemic. He also recently assumed the chair of the Senate Intelligence Committee when the previous chairman, Sen. Richard Burr (R-N.C.), stepped down because of an investigation into his stock trades.

It’s a solid comeback for Rubio, who used to grump that he hated being a senator because that body couldn’t get anything done. Well, it just did and Rubio was a driving force.

The almost (but not quite) biggest winner: NASCAR. The decision to ban the Confederate flag from its racetracks is a seismic shift in attitude and worthy of praise.

In a statement, NASCAR said in part: “The presence of the Confederate flag at NASCAR events runs contrary to our commitment to providing a welcoming and inclusive environment for all fans, our competitors and our industry.”

The sport is overwhelmingly White and embraced its redneck image over the years. NASCAR said in essence, “We’re southern, we’re good ol’ boys, and that’s the way it is.”

Drivers released a video of support for social justice and rallied around Bubba Wallace, the only Black full-time driver on the top NASCAR circuit.

But then there’s Ray Ciccrelli, a driver on the truck circuit. He announced on Facebook that he is leaving at the end of this season. The post read in part: “i ain’t spend the money we are to participate in any political BS!!”

Don’t let the truck door hit you on the way out.

The biggest winner: Jacksonville. The city openly campaigned for the Republican National Convention to move there from Charlotte and scored a major victory. President Donald Trump will make his acceptance speech in Jacksonville, presumably before a large, adoring crowd that hopefully doesn’t include a gate-crasher named COVID-19.

Much of the other RNC business will remain in Charlotte, with social distancing measures remain in place.

“Today’s announcement is exciting news for the City of Jacksonville” Mayor Lenny Curry said. “I enthusiastically welcome the opportunity to highlight everything our city has to offer, along with the tremendous economic impact. We look forward to hosting the 2020 Republican National Convention for all delegates and guests to enjoy.”

But that’s not all that Jax has going for it this week.

Curry’s office spearheaded the removal of 11 Confederate monuments and markers in the city, declaring, “We hear your voices. We have heard your voices.”

The war is over folks, so let the healing begin.

Dishonorable mention: Brad Parscale. Could Trump’s campaign manager be on the way out?

The New York Post cited Republican sources that suggest there is a move to remove Parscale.

“There’s no strategy, there’s no messaging,” one advisor told the Post.

Parscale rocketed to fame from obscurity in 2016 when, as Trump’s digital media specialist, he blanketed Facebook and other platforms with targeted posts. He moved to South Florida from San Antonio and assumed this key role in Trump’s re-election campaign.

But given the President’s under-water approval ratings and other issues, does #FloridaMan even make it to Jacksonville? Or through the weekend?

The almost (but not quite) biggest loser:  Jim Waurishuk. The Hillsborough County Republican Party Chair took absurdity to a new level. 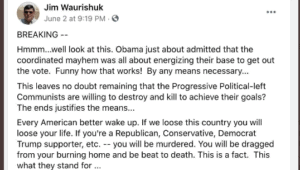 In a Facebook post, he wrote about the ongoing protests over racial injustice: “Every American better wake up. If we loose (sic) this country you will loose (sic) your life. If you’re a Republican, Conservative, Democrat Trump supporter, etc. — you will be murdered. You will be dragged from your burning home and be beat to death. This is a fact. This what they stand for.”

There have been multiple calls for his resignation, which Waurishuk has rebuffed.

But even by that mondo-bizarro standard, there is an even bigger loser this week.

The biggest loser: Our faith in data. To attack something like COVID-19, researchers need accurate information about what that nasty little bug is doing. How widespread are the infections and where did they come from? What can we expect?

Data is supposed to provide that roadmap. But which data? The Miami Herald dove into this issue and reported the public pronouncements from Gov. Ron DeSantis “were often in conflict with real-time facts.”

That prompted this quote from Republican state Sen. Jeff Brandes of St. Petersburg: “Floridians can handle the good and the bad data and we need to push out all the data so people can make decisions on their individual health.’’

Meanwhile, Rebekah Jones, the state data scientist who said she was fired because she wouldn’t manipulate COVID-19 numbers to make them look better, started a site with own statistics.

“I wanted to build an application that delivered data and helped people get tested and helped them get resources that they need from their community,” Jones told the Washington Post. “And that’s what I ended up building with this new dashboard.”

They say numbers don’t lie, but whose numbers should we believe? When people can’t trust that things add up, we all lose.

nextEuropean vacations are back, but not yet for Americans