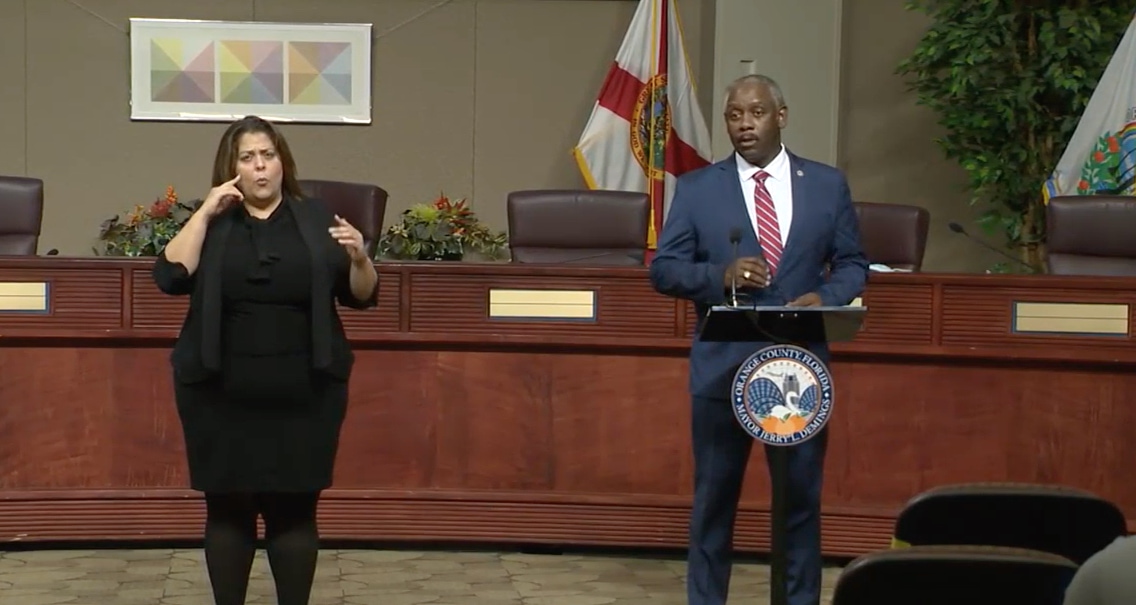 The order is expected to be longterm.

There are some exceptions.

Demings said if people are in restaurants and eating, or in bars drinking, they can take their masks off. But employees and people socializing should wear them, he said. People jogging or otherwise exercising away from other people also would be excluded. He encouraged businesses to prohibit entry to patrons who do not have masks.

The order is expected to be in place for a long period. Demings said it might be in place, indefinitely, until a cure for COVID-19 is found.

Demings said compliance will be voluntary, and that he does not want non-mask wearing to be considered or punished as a crime. But if there are complaints that a particular business is disregarding the order, further actions would be explored.

He repeated his plea that he does not want to have to take any steps to begin to close down parts of the economy again, and is hoping the mandatory mask wearing, if widely followed, could prevent that.

“We want voluntary compliance to the extent we can, and we’ll evaluate. If we don’t see what we want we will consider other measures,” he said.

Demings said he shared his decision with Gov. Ron DeSantis and urged the Governor to consider his own measures.

DeSantis has repeatedly said he sees no need to take any statewide actions recently as the state’s infection rates have begun to increase. The Governor has attributed those increases to additional testing, and of testing in high-risk groups, inflating the numbers.

That’s not what Demings and other Central Florida leaders have been saying though.

Demings and other county officials first expressed strong concerns on Monday about the rising COVID-19 infections, and the Mayor said then that if positive-test rates increased to more than 10% he would consider additional measures. They have. And on Wednesday, Rep. Rene Plasencia sent a letter to Demings urging him to require masks in public. On Thursday, Demings did.

“It is as simple as wearing a mask when you go out in public,” said Dr. Raul Pino, Orange County’s health officer with the Florida Department of Health.

In the latest report from the Florida Department of Health, Orange County logged 316 new COVID-19 cases in a 24-hour period, by far the highest total the county has seen since the coronavirus crisis began in March. The previous week saw several previous records set.

The past two days, 10% and 12% of thousands of people tested were found to have the COVID-19 virus. That is up from the range of 2-3% per day throughout late May and early June, when the virus appeared to be dissipating and the state began more aggressive reopening.

“We are continuing to see a continuous increase, a triple-digit increase sustained through transmission of the COVID-19 virus through our community. For the last 10 days, or so, we have seen that number continue to go up,” Demings said. “That is very concerning to me.”

Pino said the county is tracking a number of outbreaks, from Apopka in western Orange to the University of Central Florida area on the eastern side. The UCF outbreak appeared to be of particular concern to Pino and Demings, who noted that it appears to be fueled by young people whom Demings described as feeling invincible who are congregating in the UCF bar district.

They urged young people to reconsider their behavior.

The Orange County data seems to back that up. The average age of new COVID-19 patients in recent days has plummeted to 29 overall. In the UCF area the average age is 21, Pino said.

He also said the Department of Health is seeing an increase in the numbers of cases in multi-generational houses, where perhaps a younger person has gone out, gotten infected, brought the virus home, and infected older people.

He suggested older people or those with preexisting conditions, who are at higher risk, and also have younger people who insist on going out, ask the younger people to wear masks inside the home as well.

Demings order quickly drew partisan anger from a Republican who has been advocating that there be no restrictions to combat the public health crisis.

Rep. Anthony Sabatini of Howey-in-the-Hills, whose district does not include any part of Orange County, tweeted, “Currently drafting lawsuit against @OrangeCoFl, @OCFLMayor.”