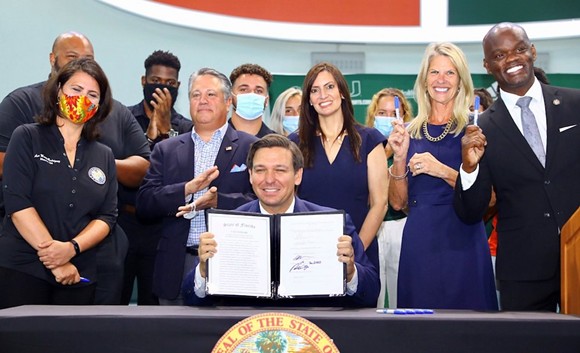 “This bill is a step in the right direction."

“This bill is a step in the right direction,” House sponsor Ardian Zika, a Land O’ Lakes Republican, said before the House approved the measure in February. “Today, we are sending a loud and clear message that the Florida House of Representatives stands by the safety of our children and our communities.”

But Rep. Joe Geller, a Democrat from Aventura, said he was “reluctantly” supporting the bill because he thought the proposed fines are too high.

Such arguments drew pushback from Rep. Emily Slosberg, a Boca Raton Democrat who co-sponsored the bill in the House. Sen. Ed Hooper, a Clearwater Republican, sponsored the Senate version of the bill.

Another bill signed by DeSantis (HB 327) seeks to curb poaching of black bears, a practice that, at least in part, stems from the animals being killed for their gallbladders. Bear bile, secreted by the liver and stored in the gallbladder, can bring in hundreds or thousands of dollars on the black market, where it is promoted as a cure for numerous ills.

The bill, sponsored by Rep. David Smith, a Winter Springs Republican, and Sen. Tom Wright, a New Smyrna Beach Democrat, includes making it a first-degree misdemeanor to kill a bear or possess a freshly killed bear during a closed season, up from a second-degree misdemeanor. Also, the bill requires the forfeiture of any Florida Fish and Wildlife Conservation Commission licenses or permits for three years for a violation.

“People don’t come to visit or come to live in Florida because we have great strip malls. It’s our wildlife, it’s our waterways, it’s our green space that makes Florida Florida,” Smith said during a February discussion of the measure. “This bill goes to protect that.”

The bills were passed during the legislative session that ended in March but did not formally get sent to DeSantis until this month. He still needs to act on dozens of other bills from the session, including a budget for the fiscal year that starts July 1.

Among the other bills signed Saturday were:

— A measure (SB 1344) that will help clear the way for building new “intermediate care” facilities for people with developmental and intellectual disabilities.

— A measure (HB 971) that calls for regulating electric bicycles in the same manner as pedal-powered bicycles, instead of as motorized vehicles.

— A measure (SB 1392) that will allow district court of appeal judges who live more than 50 miles from their courts to have “alternative headquarters.” It also would allow the judges to be reimbursed for travel between the locations.