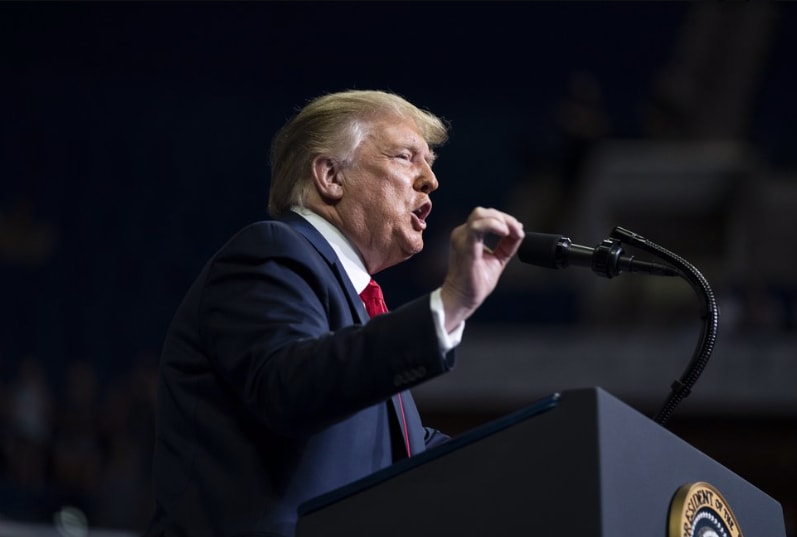 'MILLIONS OF MAIL-IN BALLOTS WILL BE PRINTED BY FOREIGN COUNTRIES,' Trump tweeted.

President Donald Trump opened a new front Monday in his fight against mail-in voting, making unsubstantiated assertions that foreign countries will print up millions of bogus ballots to rig the results and create what he called the “scandal of our times.”

The claims not only ignore safeguards that states have implemented to prevent against widespread fraud but they also risk undermining Americas’ faith in the election, spreading the very kind of disinformation U.S. authorities have warned foreign adversaries could exploit to foment doubt in the voting process.

Trump accelerated his attacks Monday following a bruising weekend for his reelection campaign, when a lower-than-expected turnout at a rally in Tulsa, Oklahoma, left him seething, and as he fights for a second term during the worst unemployment since the Great Depression. The rhetoric, coming as states scramble to adjust voting processes because of the coronavirus pandemic, represents a two-track approach of trying to both block mail-in balloting in advance and setting the stage for challenging the results once it’s over.

“It’s a way of trying to turn the foreign interference claims that have been made on their head,” said Richard Hasen, an election law expert at the University of California, Irvine. “Typically we’ve heard that the Russian government and others were working to help elect Trump, and here is Trump using fears of foreign interference as a way of bolstering his own side.”

“This potentially lays the groundwork,” he added, “for him contesting election results.”

Though election records obtained by The Associated Press show that a half-dozen senior advisers to the president have voted by mail, others in the administration have embraced the notion that states could be inundated with fraudulent ballots from overseas has gained traction within at least some corners of the Trump administration.

“Right now, a foreign country could print up tens of thousands of counterfeit ballots, and be very hard for us to detect which was the right and which was the wrong ballot,” Barr told Fox in an interview that aired Sunday.

The president tweeted on Monday a news report on Barr’s remarks as well as a separate message that said: “RIGGED 2020 ELECTION: MILLIONS OF MAIL-IN BALLOTS WILL BE PRINTED BY FOREIGN COUNTRIES, AND OTHERS. IT WILL BE THE SCANDAL OF OUR TIMES!”

But experts say that doomsday scenario is far-fetched.

“Comments like that demonstrate an ignorance of by-mail voting and the technology associated with how it actually works,” said Eddie Perez, global director of technology development at the OSET Institute, a nonprofit technology research corporation.

“There are more protocols than people are probably aware of, which would make such an attack rather difficult,” he added.

Though fraud in absentee balloting is rare, that’s not to say that there aren’t more pedestrian problems that could arise as people vote by the mail, including ballots that are intercepted in a mailbox and tampered with. The National Conference of State Legislatures lists on its website multiple disadvantages to the process, including slower reporting of results and the possibility that voters could be coerced by family or friends.

But the list doesn’t broach the idea of foreign countries manufacturing their own ballots — a type of fraud that would encounter significant practical obstacles, not least because states say they are adept at differentiating legitimate ballots from inauthentic ones.

The ballots used by Colorado’s 64 individual counties are printed exclusively in the United States, distinguished by specific colors and target areas and processed through sensitive scanners designed to weed out the inauthentic, said Secretary of State Jena Griswold. A bipartisan team of election judges conducts signature verification and refers for further investigation suspected instances of double-voting.

And in Washington state, each county is responsible for printing its own ballots and distributing them to voters, whose signatures on the return ballot are cross-checked against the signature on voter registration applications.

“My experience doing this is that usually when people get creative with things like that, you can tell,” Washington Secretary of State Kim Wyman said in an interview.

Five states — Colorado, Hawaii, Oregon, Utah and Washington — conduct elections entirely by mail, according to the NCSL. But nearly all states, led by Democratic and Republican governors alike, offer some form of the option.

With health officials saying that voting by mail can help prevent the spread of the coronavirus, many states are moving ahead with plans that ease access to mail-in ballots. Wisconsin recently decided this week to send absentee ballot requests to nearly all voters. Michigan, another swing state, has taken that step as well.

That trend has agitated Trump, who even before Monday has openly railed against absentee voting. He told Politico in an interview published Friday that the “biggest risk” to his reelection is the growing use of mail-in ballots, and suggested that his chances may hinge on whether he can prevail in court against efforts to make absentee voting easier.

By Monday, he was tweeting that this year would be the “most RIGGED election” in American history and blasted unspecified people or states who he said were “using Covid in order to cheat by using Mail-Ins!”

It was the type of rhetoric that alarmed election security experts, but was even cautioned against by a Republican-led Senate committee in a report earlier this year on Russian interference in the 2016 presidential election.

“Sitting officials and candidates should use the absolute greatest amount of restraint and caution if they are considering publicly calling the validity of an upcoming election into question,” the report said.

previousHillsborough County to require face masks at all indoor businesses