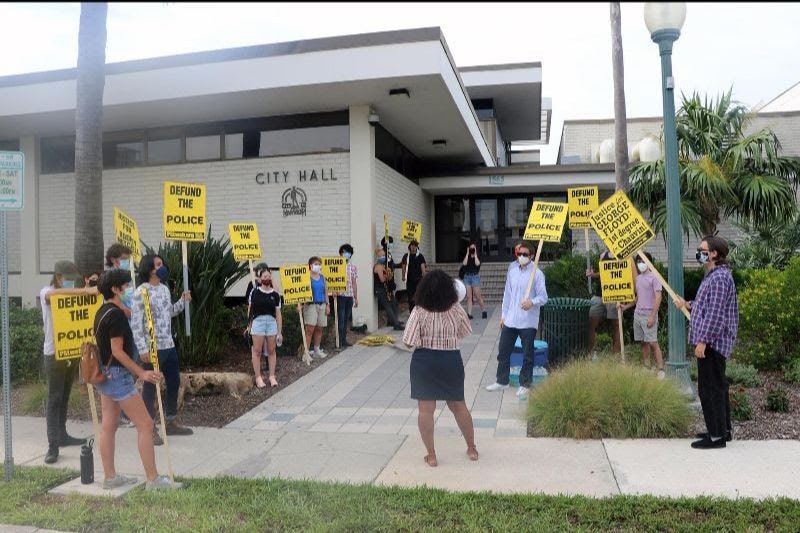 Whether that was in doubt or not wasn’t really an open question. But Gruters notes in a fundraising email sent Wednesday that Sarasota hasn’t been immune to its version of the discord reverberating through American streets in the weeks since the police killing of George Floyd.

“The Party Of Socialism & Liberation March” was how Gruters described what seemed to be a march of dozens, if the accompanying pictures are any indication,” Gruters, who is facing reelection in Senate District 23, wrote.

“We’ve watched Minneapolis, Atlanta, and Seattle from our couch. Most thought what happened there would never happen in Sarasota County. Well…We…Were wrong. And we cannot just say it’s elsewhere..because it is now in our backyard!”

“The Party of Socialists and Liberation marched throughout Sarasota County demanding that we Defund The Police,” Gruters wrote. “Let me be very clear – ‘Defund The Police’ is a dangerous agenda and it is one that the Democrat Party — who is backing my opponent — are pushing forward.”

Gruters, who enjoys the support of the Police Benevolent Association, will “never vote to defund the police.”

The Senator has $140,000 cash on hand as of June 26, the latest date for which fundraising records are available, yet he urges small dollar donations: “$20.20” is suggested.

Democratic opponent Katherine Norman, meanwhile, is at a disadvantage. As of June 26, she had just over $2,500 on hand and none of the institutional backing Gruters enjoys.

An NPA candidate is also filed.

Of the balance of voters, 125,981 are Democrats, with the remainder being NPA or third party.

For what it’s worth, the Party of Socialism and Liberation is a real entity, but one independent of the Democratic Party. In the district, the cohort has 21 members, 19 of them in Sarasota.