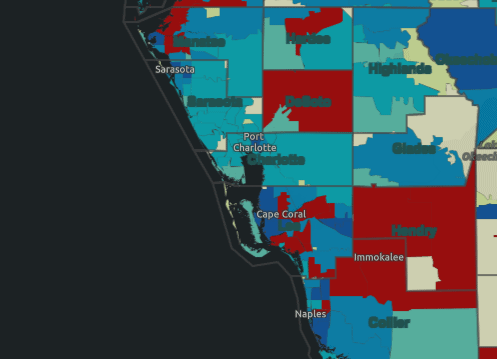 Some rural counties have infection rates twice as high.

Another 869 positive tests for COVID-19 came back in Southwest Florida overnight.

That means roughly 1% of people in the 10-county region have been infected with the coronavirus at some point.

The Florida Department of Health’s latest report, a total of 223,783 individuals have tested positive since the pandemic hit Florida on March 1. That’s a nearly, 10,000 case spike since the last set of numbers came out on Tuesday. About 8.7% of those new cases hail from Southwest Florida.

There were no new deaths reported in the region, and in fact Lee County reported one less death Wednesday than it did on Tuesday.

It’s not uncommon for individual deaths to be reassigned to new counties of residence or to disappear and reappear the following day in state reports.

Regardless, the fact deaths have substantially slowed even as cases surged means the mortality rate among known infected patients has dropped to 2.58% in the region. On June 16, it was 5.11%.

Lee County, the most populous in the region, reports the highest number of infections, with 8,125 cases. A total of 171 have died, about 2.1% of all cases.

But some of the rural counties outside the populated coastal areas suffer the worst infection rates. Hendry County, with a population just over 42,000 based on the latest Census estimates, has reported 1,129 cases.

With 2.6% of the population having tested positive, most in the last few weeks, that makes a rural county sharing borders with Miami-Dade, Broward and Collier counties one of the worst infected areas per capita in the state.

Notably, some isolated parts of the region like Highlands and Glades counties still report a low number of cases and deaths.

But even remote locations like Immokalee have seen outbreaks within the migrant farm worker community. A look at cases by zip code shows in Immokalee alone, a community straddling the Collier-Hendry county line, there have been 1,627 cases of COVID-19.

In Arcadia, there have been 731 cases, turning DeSoto County into a hotspot.